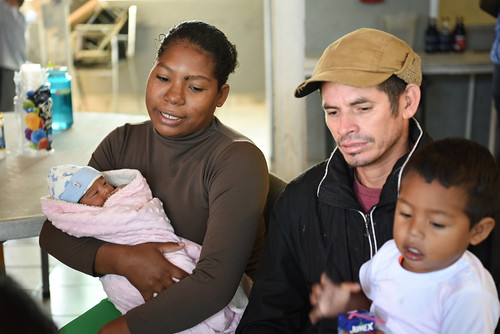 Asylum Seekers in Tijuana, Mexico
(Image by Daniel Arauz)   Details   DMCA
On June 25th Americans were shocked by the photo of Salvadoran refugees Oscar Alberto MartÃ­nez RamÃ­rez and his 23-month-old daughter Valeria lying face down in the water at the edge of the Rio Grande River. They had drowned in an attempt to cross from Mexico to Texas. As AP reported, the girl's "arm was draped around his neck suggesting she clung to him in her final moments."

This disturbing photo focused attention on a major refugee crisis at our southern border. According to Doctors Without Borders (MSF), around 500,000 people are fleeing there each year from the "Northern Triangle" of El Salvador, Honduras and Guatemala (the NTCA). They are trying to escape from living conditions "comparable to those in the international war zones where MSF has worked for decades." U.S. interventions have been a major cause of that chaos. And the Trump administration's mistreatment of these refugees at the border compounds the evil done by U.S. interventions.

The Northern Triangle is plagued by gang violence. The biggest gangs are MS-13 (Mara Salvatrucha) and M-18 (the 18th Street Gang). Their combined membership in the Triangle is about 85,000. The gangs are a by-product of a bloody civil war that raged in El Salvador from 1980 to 1992, in which "leftist guerrillas rose up against a wealthy elite and the military state that had long dispossessed the rural underclass of land" (Nat. Geographic, 3/19). The U.S. spent billions supporting the right-wing dictatorship. About 75,000 civilians were killed by the military and its death squads.

The civil war drove tens of thousands of refugees to the United States. They were denied asylum and remained as undocumented migrants, including a large population in Los Angeles. Young Salvadoran males there banded into gangs (MS-13 and M-18) initially in order to protect themselves against other ethnic gangs. But they soon developed into full-scale criminal enterprises known for exceptional brutality.

Beginning in the late 90s the U.S. began deporting (or exporting) thousands of these gang members back to El Salvador, where they recreated the gang culture they had developed in the U.S. and expanded their domain to Honduras and Guatemala. They have made the Northern Triangle one of the most dangerous places in the world to live. Extortions, murders, sexual violence, gunfire in the streets, all are part of the daily lives of ordinary people unable to afford private security available to the wealthy.

As reported in PRISM, the journal of the National Defense University, "gang beheadings and dismemberment of victims are now routine; lynching and burning victims alive are commonplace; and the [gang] recruitment of children as young as 11 is an everyday occurrence. Those who cannot afford to send their children out of the country are forced to seek safety in the shrinking areas of the national territory where the gangs are not fully in control."

In the three NTCA countries there is a racial/social stratification common to many other Latin American nations, as described by Patrick McDermott in The UNZ Review: "a wealthy white elite at the top, the rest of the white population just below them, mixed-race mestizos and mulattos further down, and black and Indigenous peoples at the bottom." The wealthy classes resist paying enough in taxes to support basic social services. As in El Salvador, white oligarchs have worked closely with militaries trained and financed by the U.S. to defeat left-wing parties trying to lessen the economic misery of people of color in the lower classes.

In Honduras U.S. capital dominated banking, mining and agriculture throughout the 20th century. The weak local white elite was heavily dependent on American support for its military in maintaining its ascendancy over restless peasants. During the Reagan anti-leftist crusade in Central America in the 1980s, things got even worse. In the post-Reagan era Honduras "remained a country scarred by a heavy-handed military, significant human rights abuses and pervasive poverty."

In Guatemala "In 1954, the CIA helped overthrow Guatemala's democratically elected president, who supported land reform to benefit the largely indigenous peasantry [at the expense of the US-based United Fruit Company and other private interests]" (Public Radio International, 12/29/16). Six years later a rebellion against the U.S.-supported military regime launched a 30-year civil war that killed over 200,000 mostly indigenous people, with widespread rape and torture. The U.S. continues to support a militarized white oligarchy that rules amid widespread poverty.

In 2018 the NTCA refugee caravans included over 50,000 unaccompanied children. Their grueling trek spans several weeks and a 1000 or more miles on foot or hitching rides. These migrants are regularly subject to extortion by Mexican officials. Large numbers are kidnapped by criminal gangs who demand ransoms from the families they've left behind. Inadequate food and shelter leave many in poor health. Between 60% and 80% of Central American female migrants are raped along the way.

The Trump administration is using its executive power to make life as miserable as possible when these refugees arrive and request asylum. It detains them in overcrowded and unsafe conditions in an unsuccessful effort to deter others from coming. As reported in The Atlantic: "One pediatrician who visited a Border Patrol facility in Texas observed 'extreme cold temperatures, lights on 24 hours a day, no adequate access to medical care, basic sanitation, water, or adequate food.' Photographs show migrants huddled together, languishing in filth behind chain-link fences, some with little more than Mylar blankets for shelter."

Americans should not limit their outrage to the racism and cruelty of the Trump administration's treatment of Central American refugees. They should also demand that the U.S. stop its century-old policy of supporting right-wing militarized governments that privilege elite white minorities over the vast majority of their non-white populations. The U.S. influence in Central America can be rightly called an infestation.

Related Topic(s): America; Asylum; Class; Gangs; Intervention; Policy; Rape; Refugees; Rights, Add Tags
Add to My Group(s)
Go To Commenting
The views expressed herein are the sole responsibility of the author and do not necessarily reflect those of this website or its editors.