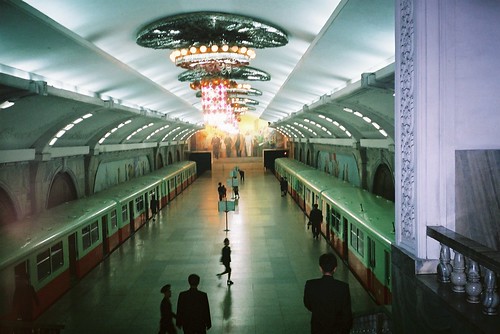 The American imperialist propaganda machine recently experienced an especially damaging blow to its veneer of reliability. Last month, the south Korean newspaper Chosun Ilbo claimed that north Korean diplomat Kim Yong Chol had been sentenced to "hard labor and ideological re-education" as punishment for his failed nuclear summit with Trump. Then Yong Chol was spotted sitting near Kim Jong Un at a concert, forcing American media outlets to walk back on a claim that they had uniformly accepted.

The decision by these outlets to uncritically report this claim wasn't the result of innocent naïvete'. It's the latest example of the American media promoting fabricated atrocity stories to advance the agenda of empire, and its theme is identical to many other media hoaxes which have been used to slander the north Korean government. In 2016, a north Korean defector claimed that military officer Ri Yong-gil had been executed, then in 2018 Ri Yong-gil was promoted to be the Chief of General Staff. In 2013, famous north Korean singer Hyon Song-wol was reported to have been killed in a "hail of machine gun fire while members of her orchestra looked on," then she continued to be regularly seen appearing in public. In 2010, South Korean media reported that a soccer coach had been executed, then reporter Jean H. Lee said that she'd "ran into him" at the Pyongyang airport.

Thankfully the false report about Kim Yong Chol has been getting attention from the media, because this and the other fabricated north Korea atrocity stories from recent years are part of a vast and sinister propaganda project that Americans need to become aware of.

These claims about north Korea come from an operation where the CIA, in coordination with the south Korean government and media, works to create misinformation about the DPRK. As I've discussed in an interview with the Korean Friendship Association zone delegate Shane Lawrence Pick, the CIA works to farm individuals from north Korea who are willing to publicly repeat fabricated claims of atrocities. This fact is even worse than it sounds; the methods that the U.S. empire uses to produce its propaganda about the DPRK are as coercive and inhumane as the abuses that the U.S. accuses north Korea of.

Last year, UCLA undergraduate student David Yun made a documentary titled "Loyal Citizens of Pyongyang in Seoul," wherein two north Korean defectors and a human rights attorney were asked about just how biased typical north Korean defector testimonies are. Their answers confirmed all suspicions that the U.S. and south Korea are perpetrating a series of hoaxes about the DPRK.

"In 2013 I defended a defector named Yoo Woo-Seung," said the human rights attorney Jang Kyung-Ook, who was interviewed because of his extensive experience with south Korean intelligence and north Korean defectors. "The person who testified that he was a spy was none other than his younger sister, who came to the south after her older brother invited her to come live with him. Yoo even asked his friend in the NIS (south Korean intelligence) to take care of his sister once she defects. And the NIS coerced the sister into confessing that she and her brother were spies. We refuted the false confession and evidence presented by the NIS through this, we proved that the NIS still manufactures spies by using torture and falsifying evidence.

"When defectors arrive in south Korea, the government decides whether or not to accept them, also whether tax money will be spent to support them or not," continued Kyung-Ook. "Since they have no money when they arrive, this is all conducted through investigations in the NIS defector holding center. The center got a little better now. When you're being investigated you're alone during the day, but during the rest of the day defectors are held in cells with no other person. So in that sense, it has improved. Before, all defectors were held in solitary confinement. Minimum held for one week, maximum held for six months. If anyone is held more than three months, they've already been made into a spy. Because when you're put into solitary confinement for that long, month after month after month, you go crazy. You'll do whatever the agents tell you do to. The NIS calls this place a 'temporary' shelter for the 'protection' of the defectors, but they're really incarcerating them."

The Western comparisons of north Korea to George Orwell's 1984 are both absurd and ironic. Shane Lawrence Pick has told me that he's personally talked with defectors who say they were fully allowed to voice objections to their government; the DPRK's justice system is in fact extremely humane, with the country outlawing torturous practices like solitary confinement and lacking a system where felons lose any of their rights after they've been convicted of a crime; elections with multiple parties take place in the DPRK, and the process in which candidates are selected is in fact far more democratic than the way it happens in the United States. North Korea isn't a dictatorship by any honest definition, and its commitment to upholding human rights is among the best of any country in the world.

At the same time, the south Korean government and the U.S. use truly Orwellian torture practices to manufacture propaganda which whips people into war hysteria against the DPRK, and which makes Kim Jong Un into a target for real-life Two Minutes Hate sessions. As Yun points out at the beginning of the film, none of the claims of repression and atrocities from the north Korean government are supported by any video or photographic evidence; all of them come from defectors who've been persuaded to fabricate accounts of their experiences, and whose fraudulent narratives are readily promoted by neoliberal think tanks and the corporate media.

And the methods that are used to create these narratives consist of a variety of tactics, in addition to the ones where defectors are turned into spies by the NIS. In many cases, defectors publicly voice atrocity stories because they've been extravagantly paid to do so.

"It is defectors who say that there really are human rights violations in the North," said one of the defectors who was interviewed in the film. "But we have to examine defectors very closely. There is a TV show called 'Now On My Way to See You" in south Korea. It's a show starring defectors and their stories. Southerners have never been to the North, right, but somehow know more about the North than me, an actual Pyongyang citizen.

"When you watch this show and all its star defectors, you will watch this show with tears running down your face," she continued. "'North Korea has to be destroyed,' 'We must liberate north Koreans and give them freedom.' It will make you say things like that. But, when you take a look at the defectors who talk on the show, they're all young adults in their 20s and 30s. The Arduous March was in 1995 right? That means 23 years ago, and it lasted about 10 years. The defectors that are in their 20s and 30s right now, from birth to childhood, grew up not knowing what rice or meat is. Because they were born during the Arduous March. As soon as they were born, they only had corn, grass, and tree bark to eat. And instead of going to school they had to trade in the market everyday, and they had to go up mountains and gather wood for firewood. So these young defectors who were starring in the show 'Now On My Way to See You' really did experience starvation and pain. I have experienced starvation during the Arduous March too, so did my daughter. However, partition means news from the other side is not told truthfully. Instead the prolonged [Korean] war creates a need to distort truth and tell lies. The people who need war are creating this.

"But 'The North lives in extreme poverty,' 'we starve and shiver,' just these testimonies won't keep you on the show. It's more difficult than keeping a job at Samsung or those huge corporations. You're going to need more of 'I was so hungry I ate a human being,' 'I gave birth to a baby, but because he's disabled the government buried him alive.' Only these kinds of testimonies can get you a place on the show."

This example encapsulates the depravity of the capitalist system that's the source of these propaganda campaigns and war efforts against the DPRK. South Korea's propagandists have been manipulating financially needy people into telling outrageous lies on TV for money, something that could only happen under capitalism.

Related Topic(s): Democratic Peoples Republic Of Korea, Add Tags
Add to My Group(s)
Go To Commenting
The views expressed herein are the sole responsibility of the author and do not necessarily reflect those of this website or its editors.