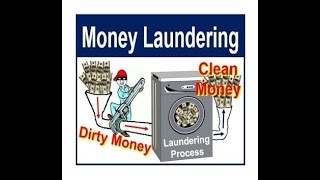 Our long-awaited "Mueller Time" has filled the punditocracy with tales of collusion and delusion. But most have missed the two-word trap door through which Donald Trump is likeliest to fall.

Collusion, technically, is not a crime. Treason is. So is conspiracy. But they may be hard to prove.

Yes, the Don Jr.-Eric-Ivanka-Kushner-Cohen-Manafort cabal has lied to Congress, the courts, and the people. More will arise as the Trump consiglieri flee the sinking ship.

But as predicted by Steve Bannon, here are the two words most likely to bring Trump down: MONEY LAUNDERING.

To source this for yourself, start with David Cay Johnston's It's Even Worse than You Think and Craig Unger's House of Putin House of Trump.

These Rosetta Stones let us view the evolution of Trump's most obvious illegalities:

-- The Donald was born into organized crime.

-- His grandfather (a German immigrant) ran a mobbed-up brothel in California.

-- His father, a mobbed-up Queens slumlord, was a KKK-supporting, federally-prosecuted racist intimately linked to at least two of the city's infamous Five Families.

-- From age six, Donald helped launder dad's money with a six-figure income that did not come from his youthful paper route.

-- Infamous for stiffing those who backed and worked for him, Donald plunged into billions of debt and at least four bankruptcies.

-- But after the Soviet Union fell, a new mobster class of Russian billionaires needed to launder cash into the U.S.

-- Many favored Germany's Deutsche Bank, which became the only financial institution willing to loan Trump money.

-- As a shady real estate developer who took cash and asked few questions, The Donald became a Russo-American bag man.

-- Trump obliged his ex-Soviet saviors with at least 1,300 real estate transactions allowing them to slip countless rubles into the American banking system.

-- At the peak sits Vladimir "don" Putin, who took power at the moment of Y2K, to whom nearly all the new Russian billionaires owe fealty, and whose files (forget about that "pee tape") undoubtedly contain more than enough documentation to sink the entire Trump apparatus in a single afternoon.

-- Trump and his family have used the White House as a personal laundromat, leveraging licenses, a bailout for Kushner's disastrous investments in 666 Fifth Avenue, and much more.

-- Much of this has happened in New York, where prosecutions will be beyond the reach of White House pardons.

-- Deutsche Bank, which has paid more than $600 million in fines related to money laundering, has just been freshly raided.

There is much, much more. (For a riveting run-down of how the legalities might shake out, a recent show at Progressive Radio Network offers some critical insight).

But the methodical Mueller clearly has Trump's tax returns. The Donald's net worth may well be negligible, all in rubles, defined by mobster illegalities dating back at least three decades, many of them prosecutable in Manhattan, where his enemies are legion.

Will Trump's fake House of Cards then collapse, and his presidency with it?

The real bottom line to the Trump trifecta of collusion, mass perjury, and fiscal felony will not require likely impeachment by a Democratic House or unlikely removal by a GOP Senate.

It could come instead with Trump desperately trying to negotiate pardons for his children ... facing post-presidency jail time for the money-laundering buried in those Deutsche Bank files and the testimony of so many desperate consiglieri trying to avoid prison ... with the almost certain collapse of his phony financial empire ... and with the fury of a media and public to whom he's been lying nonstop with felonious contempt dating at least from the 1980s.

At some point, the stability-loving corporations that really run this world just might say (as with Dick Nixon):

"ENOUGH!" He got us our tax break and gutted environmental regulation ... now he needs to leave."

Related Topic(s): Earth Day; Impeachment; Money; Money Laundering; Trump Broken Promises; Trump Family, Add Tags
Add to My Group(s)
Go To Commenting
The views expressed herein are the sole responsibility of the author and do not necessarily reflect those of this website or its editors.