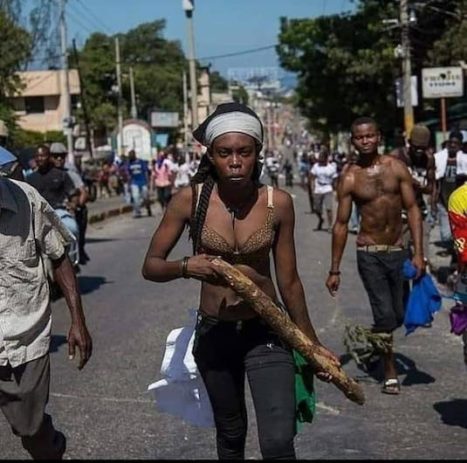 Use What's In Your Hands
(Image by ezilidanto.com)   Details   DMCA

Oct 2019 Popular Haiti Uprising: Use What's in Your Hands

Haitians have no military, media or monies to use to defend themselves in the citadels of power or from the superpowers. But we fight tyranny with what's in our hands our courage, culture, revolutionary history, brain, breath, belly, soul bare bodies. Never becoming what we fight against.

I was in Haiti in 2004 during the mass protest to stop the Internationals the agents of big business from taking down the people's first democratically elected president, for a second time. I'll tell you about that 33rd Coup d'etat and brutal foreign invasion in a minute.

But first, understand well what the faces of Haiti violence, brutality and corruption look like and why these faces are always hidden from view in news reporting about Haiti. Flip your colonized brain open and see the billionaire Haiti oligarchs and the Western Core Group of warmongers, tyrants, despots and bringers of terror in Haiti: 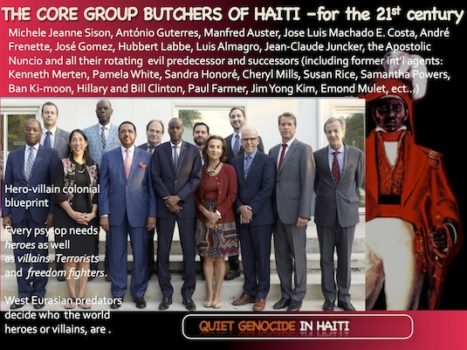 The Core Group of Butchers in Haiti
(Image by ezilidanto.com)   Details   DMCA
Core Group of Butchers and Bandits in Haiti from the Western European enslaving nations led by U.S., Canada, France and now including Brazil because of its terror treatment of its large Black population". Click here, here and T he Arab, Syrian, Jewish mafia families in Haiti.

"I Want the Assets of the Country to be Equitably Divided"

Shortly after the Haiti Revolution the mulatto sons of France insisted that the plantations and properties of their loser white fathers, liberated by the Black revolution belonged to them. Janjak Desalin, Haiti's founding father, born September 20, 1757, assassinated October 17, 1806, responded:

"And those whose fathers are in Africa, shall they have nothing?" Janjak Desalin, 1804 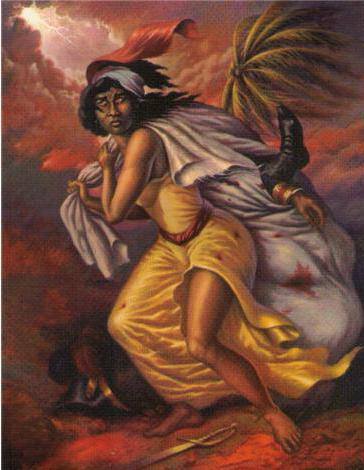 Kouwòn pou Defile Haiti Warrior queen Defile, who like Goddess Asar, gathered the dismembered pieced of Heru/Desalin for the rebirth Haiti women like this and this, fight for today. (Listen to Defile's Song. See, Until She Spoke)

Janjak Desalin (Jean Jacques Dessalines) wanted an equitable distribution of the lands and properties liberated by the masses of enslaved Blacks in Haiti. For this, he was assassinated by the local mulatto sons of France in collusion with the former enslaving white nations (France, Britain, Spain and their U.S. and other white enslaving nation allies).

That was the first coup d'etat in Haiti. Haiti has suffered 33 such foreign-sponsored interventions.

With Desalin's murder on October 17, 1806, neocolonialism and the legacy of impunity had begun in Haiti. Instead of a Black ruled independent nation as Desalin envisioned, his death turned Haiti into a Black ruled defacto colony with mostly Eurocentric black and mulatto puppet presidents, tolerated by the foreign powers if they helped them enslaved their own for personal gain through the appearance of promoting Haiti sovereignty while fleecing all its labor and exporting its riches abroad.

Haiti became that clientele nation of the former enslavers also through ecclesiastical colonialism, where its rulers where educated at Haiti school taught by foreigners to work for the interests and cultures of foreigners. Haiti children are taught everything Western is good, everything Haitian is bad and ugly. And they've even funded the lighter skinned Mickey Martellys to put it to song for the Haiti people to dance to their own destruction!