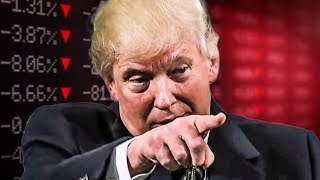 Stock Market Tanks As Trump Leads Us Into Recession
(Image by YouTube, Channel: The Ring of Fire)   Details   DMCA

Capping off a week of truly shocking incoherence and lunacy, the Trump administration Friday provided us all with a telling glimpse of how this fetid presidency will finally, in all likelihood, meet its end. It won't be through impeachment or some chimeric application of the obscure and, practically speaking, useless 25th Amendment, but through the simple and relentless onslaught of economic cause and effect.

In a brutally straightforward article for the Philadelphia Inquirer, economist Mark Zandi explains where we are now, and why.

"The risk of recession is uncomfortably high and rising. President Donald Trump's trade war is the proximate cause of what ails the economy. Indeed, if the president follows through on his most recent threat to raise tariffs on Chinese imports, the odds of a downturn between now and this time next year are better than even.

"The economy's growth has already slowed sharply. Real GDP and job growth have throttled way back from this time last year, and unemployment is no longer declining.

"The slowdown is due, in part, to the winding down of the deficit-financed tax cuts. The president had argued that the tax cuts, which went mostly to corporations and wealthy households, would significantly lift long-term growth. Not so. The stimulus from the tax cuts has already faded."

Had Trump been intelligent enough to leave well enough alone, he just might have eked out re-election solely by running on the resilient economy he inherited from President Obama. The tax cuts he passed for the nation's wealthiest also provided a temporary shot of adrenaline that might just have lasted long enough to avoid the cyclical (and historically normal) downturn that always loomed on the horizon.

But because he couldn't contain his own mental instability, an instability that this week's atrocious behavior all but confirmed, he couldn't leave well enough alone. Instead, he started a pointless trade war with China, and the economic condition of the U.S. suddenly became a hostage to an irrational policy in the hands of a single unstable, autocratic, and above all incompetent person.

We're long past the point where the trade imbalance between the U.S. and China provides any real pretext to Trump's actions, and the media has conveniently dropped the pretense that there was any critical economic necessity for them; the only focus now is on their likely outcome. As Zandi points out, having an inherently unstable person at the helm of the economy has a chilling effect on the willingness of businesses to invest. Two-thirds of CFOs of U.S. companies (according to this Duke University survey) now believe that the country will enter a recession before the end of Trump's term. Trump's trade war, his personal volatility, and his unpredictability have resulted in corporations all over the world putting their plans to expand and innovate on hold.

"They won't make big investments. And manufacturers, ag-related industries, and transportation and distribution companies that depend on global trade have pulled back on hiring."

Back over at the Philadelphia Inquirer, Zandi notes that global investor confidence has also plummeted, even as interest rates have dropped, with short-term interest rates now exceeding long-term rates. This is a classic indicator of impending economic recession. If the trade war escalates, consumer confidence also drops: Consumers spend less, creating a downward spiral of decreasing investment, the previously-mentioned increasing nervousness of companies to invest, and an increase in unemployment. As Zandi states, that is the "vicious cycle" of all recessions.

And the Fed can't ride to the rescue because Trump's unpredictable behavior makes that impossible. How can the Fed safely predict whether a rate cut will be beneficial in a volatile trade war whose parameters change on a daily basis? It can't, which is why you see them exercising such caution now, a caution that, as seen Friday, only adds to Trump's wild irrationality.

Josh Barro, writing for New York Magazine, sees Friday's events, between Trump's attacking Fed Chair Jerome Powell as an "enemy" and his declaration that he will escalate even further his tariffs against China, as a watershed moment.

Related Topic(s): China; Economy; Investing; Tariffs; Trump Ego; Trump Tax Cut, Add Tags
Add to My Group(s)
Go To Commenting
The views expressed herein are the sole responsibility of the author and do not necessarily reflect those of this website or its editors.