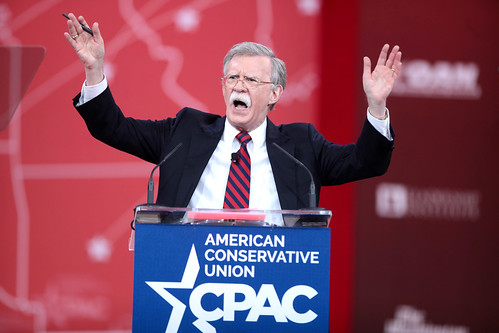 It's long been an American conceit that the way you negotiate is to demand a surrender by your opponent, and then you hammer out the terms of that surrender.

Ir worked great in World War II after the Red Army chewed up Germany's elite army and left the country with the choice of being overrun by the Soviets or surrendering at least part of the country to the US, Britain and France. It worked great in Japan too after the US, with a temporary monopoly on an unimaginably powerful new weapon, incinerated two of the country's cities and threatened to keep on doing so until The emperor and his generals gave up or let the Island nation be turned into charcoal.

But the concept didn't work in Vietnam, which drove the US out. It didn't work in Iraq, which is now an client state of Iran, it didn't work in Afghanistan, where the US is still fighting the Taliban 17 years after invading that poorest of countries. Truth to tell, the only time the policy really has worked was against the tiny island nation of Grenada, where the primary resistance to the US armada that assaulted the place was a company of Cuban construction workers working on a new airport. (7000 medals were awarded to US military personnel following that triumphant victory.)

But history doesn't matter for the world's "exceptional nation," and so now we have Trump's key advisors -- the neoconservative nut-job John Bolton, Trump's latest National Security Advisor whose primary asset seems to be hair, not brains or even military experience, and Mike Pompeo, recently shifted from the CIA director post over to Secretary of State, a porcine West Point graduate whose international experience appears to be limited to his having concluded that former President Barack Obama somehow managed to be both an "evil Muslim" and a Commuinist.

This goofy pair, appointed by that wiley deal-maker Trump, have managed to queer the deal on a summit between Trump and North Korean leader Kim Jong-un. First to give Kim second thoughts was Bolton who announced that the model for a peace agreement between the two nuclear powers, the US and North Korea, would be Libya, where of course, the US got Libyan leader Muammar Qaddafy to ship off all his nuclear bomb-making equipment to the US, and then orchestrated his overthrow and brutal murder. Bolton has insisted, with no disagreement from his boss, that for starters, North Korea would have to fork over all its nuclear weapons, and destroy all its nuclear weapons-making facilities. Then we can talk, the idea goes.

Kim, of course, no dummy he, especially backed as he is by a treaty with neighboring China which commits China to come to North Korea's aid -- as it did quite decisively only a year after the foundation of the People's Republic of China, remember? -- should North Korea be attacked by the US or any other foreign power, has said no deal"

Related Topic(s): Clowns; Foreign Policy Failure Iran; Meddling In Iran; North Korea And South Korea Talks; Trump Cabinet; Trump Diplomacy, Add Tags
Add to My Group(s)
Go To Commenting
The views expressed herein are the sole responsibility of the author and do not necessarily reflect those of this website or its editors.