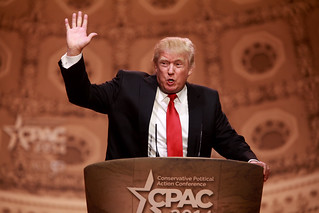 When the presidential primaries began more than a year ago, the two leading candidates were Hillary Rodham Clinton for the Democrats and Jeb Bush for the Republicans. It seemed at that time that there would be another Clinton--Bush race in the general election.

That, as any voter knows, has changed drastically.

Sen. Bernie Sanders, officially an independent but running as a Democrat, has shuffled off his one-digital support to being about equal to Clinton among Democrats, tying with Clinton in Iowa, beating her in New Hampshire, but losing in Nevada. Sanders' supporters tend to be younger and are energized by his presence and persistence in pushing a liberal agenda that focuses upon individuals and how government can assist a broad spectrum of the population. His campaign is similar to the support for Sens. Gene McCarthy and Robert F. Kennedy in 1968 and Sen. George McGovern four years later, both of whom energized those in their 20s and 30s and older voters who identified themselves as liberals. Sanders could still win substantial support from Super Tuesday, March 1, when voters of 11 states cast their ballots. However, several states are in the south and southeast, which lean heavily conservative, even among Democratic voters. Although Sanders has pushed Clinton more to the left, she might be able to go into the Democratic convention with a substantial lead and the nomination.

Sanders is helped by the Republicans who have hammered Clinton's failure to separate her personal and federal emails during the entire time she was secretary of state. The problem got traction from Clinton's weakness early in her campaign to adequately defend the use of personal emails and not using an encoded federal system. Since that time, she has faced a Congressional hearing and had not only explained her reasoning for using one phone but managed to erase any doubt of her violation of federal laws. But the Republicans continued their attack, spreading distortion and half-truths, using the media to channel their message. A couple of dozen emails were classified confidential or secret, but only after Clinton left office.

On the Republican side, the race has evolved from Bush as the leader in early polling to the presence of 15 candidates, all more political sounding than presidential. By the end of 2015, the candidates were shown in editorial cartoons as clowns clustered in cars. Donald Trump was portrayed by almost every stand-up comedian and in the media as just your average ordinary boisterous and egotistical billionaire with a hilarious hair-do to being the chief clown to being the possible Republican nominee.

The nine Republican debates were mostly random acts of personal attacks rather than true debates. Several times Trump called out "liar" to Sen. Ted Cruz, but several political fact checkers point out that about three-fourths of Trump's statements are half-truth, exaggerations, and outright lies. This would be the same Trump who numerous times said that President Obama is a Muslim who was born in Kenya, and has challenged Cruz's citizenship, which has been constitutionality affirmed by having an American mother.

Among his more outrageous proposals, he has repeatedly stated he said he would deport all 11 million undocumented foreigners in the U.S., and build a wall along the entire U.S.--Mexican border. But, Trump doesn't address the issue of cost--and how a conservative could justify that cost for building and then monitoring it--or the more realistic probability there will be innumerable problems to round up even a fourth of the illegal immigrants and separate them from their parents, or ways to tunnel under, climb over, or just go around that wall by entering the U.S. by boat on two coasts or by planeloads of immigrants and refugees who would land in desolate air strips with no control towers. This, of course, is the same Trump who had hired about 150 illegal immigrants to work on his Trump Tower.

He has played to the fears of a radical terrorist Muslim invasion by arguing for a moratorium on any Muslim trying to enter the country, an inane proposal that would require several million dollars to enlarge the number of Immigration and Customs Enforcement agents and support staff, already at 20,000, and would ultimately be shot down in the federal courts.

Among all his boasts and braggadocio, with his name in giant letters on office buildings, hotels, casinos, and a questionable failure at Trump College, he has defaulted into bankruptcy four times. Trump's speeches are accepted and applauded by voters who believe bar-room profanity laced into ignorant chatter is just the kind of speaking that they do, and see the billionaire as one of their own.

By Super Tuesday, most of the Republican candidates and all of the moderate Republicans will have dropped out of the race, run over by the Trump express, fueled almost entirely by Trump's own money and more media coverage than any other candidate. With the moderate Republicans out of the race, it appears the most conservative ones--Sens. Cruz from Texas and Marco Rubio from Florida have the best chance to defeat Trump. Trump has shown enough strength to capture the delegates in the conservative south and southeastern states on Super Tuesday, possibly making his nomination inevitable.

Trump's message appeals to those who see him favorably as an outsider to Washington politics and to those whom Trump has managed to play to their fears and paranoia.

But none of that matters because he spews out what a traditional base of conservatives want to hear, and his rhetoric supersedes how he plans to carry out any of his proposals, but gets him the votes he needs to be the Republican nominee.

Far more important, his rhetoric sounds as scary as anyone who began as a small voice of the people and then became their dictator.

Related Topic(s): Donald Trump; Party Politics Republican; Primaries; Republican; Republican Candidates; Republican Primaries, Add Tags
Add to My Group(s)
Go To Commenting
The views expressed herein are the sole responsibility of the author and do not necessarily reflect those of this website or its editors.