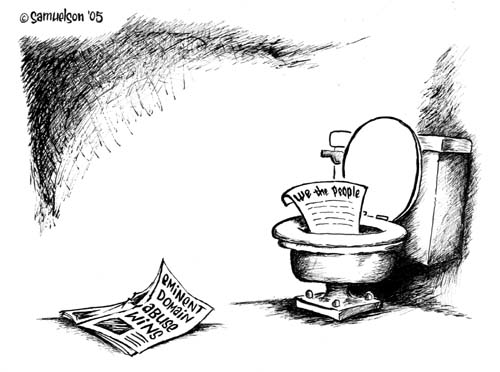 There is no level to which the Trump administration will not stoop to achieve its dystopic view of America.

There is no bottom.

Case in point: the administration is now suing an orphanage on the U.S.-Mexico border because it's on property needed for the racist border wall Donald Trump has been promising his supporters since he was a candidate.

The Wall Program Management Office of the U.S. Customs and Border Protection (CBP) agency recently offered the Sacred Heart Children's Home in Laredo, Texas $100 as "just compensation" in exchange for eminent domain access to its 68-acre property for surveying for roads, fencing, and other structures "designed to help secure the United States/Mexico border within the State of Texas."

Operating for over a century, Sacred Heart houses 40 children, according the Laredo Morning Times.

The Rio Grande International Study Center is suing the Trump administration on behalf of a coalition of border residents alleging diverting $3.6 billion in military funds for border wall construction violates Congress' authority to determine how the federal budget is spent.

Last year the five conservatives on the United States Supreme Court agreed to block a lower-court ruling barring Trump from putting money toward a wall, allowing him to pay for it with billions in Congressionally approved Pentagon funds, explaining:

"The Government has made a sufficient showing at this stage that the plaintiffs have no cause of action to obtain review."

"Border communities, the environment, and our Constitution's separation of powers will be permanently harmed should Trump get away with pillaging military funds for a xenophobic border wall Congress denied."

With just the money originally intended from the Defense Dept., the administration states it can construct more than 100 miles of fencing.

The environmental damage a wall serpentining its way across the American South can cause are egregious enough.

Related Topic(s): Military; Pentagon; Trump; Trump Border Wall, Add Tags
Add to My Group(s)
Go To Commenting
The views expressed herein are the sole responsibility of the author and do not necessarily reflect those of this website or its editors.