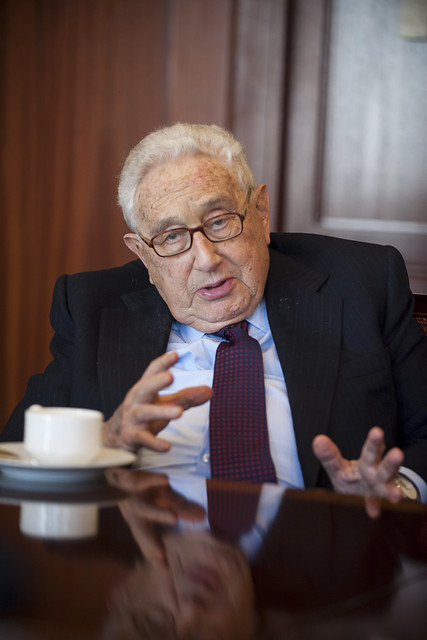 Henry Kissinger, 97, Henry the K. for those he keeps close, is either a Delphic oracle-style strategic thinker or a certified war criminal for those kept not so close.

He now seems to have been taking time off his usual Divide and Rule stock in trade - advising the combo behind POTUS, a.k.a. Crash Test Dummy - to emit some realpolitik pearls of wisdom.

In realpolitik terms, this "kind of Cold War" is already on; across the Beltway, China is unanimously regarded as the premier U.S. national security threat.

Kissinger added U.S. policy toward China must be a mix of stressing U.S. "principles" to demand China's respect and dialogue to find areas of cooperation: "I'm not saying that diplomacy will always lead to beneficial results"This is the complex task we have" Nobody has succeeded in doing it completely."

Henry the K. actually must have lost the - diplomatic - plot. What Chinese Foreign Minister Wang Yi and Russian Foreign Minister Sergey Lavrov are now involved in, full time, is to demonstrate - mostly to the Global South - how the American-enforced "rules-based international order" has absolutely nothing to do with international law and the respect of national sovereignty.

At first I had archived these Henry the K. platitudes out of sight. But then someone who used to hold a stellar position at the top of the U.S. Deep State showed he had been paying close attention.

This personality - let's call him Mr. S. - has been one of my invaluable, trustworthy sources since the early 2000s. Mutual confidence was always key. I asked him if I could publish selected passages of his analysis, not naming names. Consent was given - ruefully. So fasten your seat belts.

Mr. S., in a quite intriguing fashion, seems to be expressing the collective views of a number of extremely qualified people. Right from the start, he points out how Henry the K.'s observations explain today's Russia-China-Iran triangle.

The first point that we make is that it was not Kissinger who created policy for Nixon, but the Deep State. Kissinger was just a messenger boy. In the 1972 situation the Deep State wanted to get out of Vietnam, which policy was put in place as containment of communist China and Russia. We were there based on the domino theory.

The Deep State wanted to achieve a number of objectives in approaching Chairman Mao, who was antagonized by Russia. It wanted to ally in 1972 with China against Russia. That made Vietnam meaningless, for China would become the containing party of Russia and Vietnam no longer meant anything. We wanted to balance China against Russia. Now, China was not a major power in 1972 but it could drain Russia, forcing it to place 400,000 troops on their border. And our Deep State policy worked. We in the Deep State had thought it through, and not Kissinger. 400,000 troops on the Chinese border was a drain on their budget, as later Afghanistan became with over 100,000 troops, and the Warsaw Pact had another 600,000 troops.

Related Topic(s): China Politics; People Henry Kissinger; War With China, Add Tags
Add to My Group(s)
Go To Commenting
The views expressed herein are the sole responsibility of the author and do not necessarily reflect those of this website or its editors.