Weren't the valiant, courageous actions of civil rights advocates a triumph for social justice? Did it not lead to further advances in that struggle? And if you are referring to the movie, is it not a triumph as well, getting a film that portrays one of the signal struggles of the Movement during the 60s with such searing honesty, no holds barred in dealing with the "Which side are you on?" question, applied to this event?

Well, yes, the Selma March was a triumph for the civil rights movement. It played a very important role in getting Lyndon Johnson to support what became the Voting Rights Act. It did lead to further advances in that struggle. The movie is a triumph as well, a brilliantly staged and acted docudrama which, among other things, uses the real Edmund Pettus Bridge in Selma, Alabama, as the setting for the re-creation of the real march that took place across it in 1965. 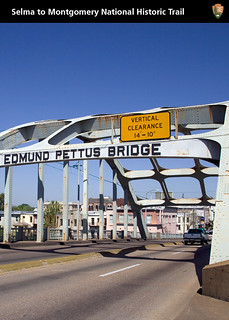 Edmund Pettus Bridge. In the movie, the actual bridge was used for the recreation of the marches (yes, there was more than one, until, under the guard of Federal troops sent by President Johnson, the marchers got safely across it and on their way to the s
(Image by TradingCardsNPS)   Details   DMCA

Ironically enough, the bridge is named for a Confederate Brigadier General, who later, operating out of his law office [!], became the leader of the Alabama Ku Klux Klan in Selma, and then went on to become a U.S. Senator from Alabama. This is particularly ironic in the context of the Voting Rights Act and the struggle to enact it. The Ku Klux Klan was founded very shortly after the end of the civil war by an association of ex-Confederate generals, planters, certain Democratic politicians, and other white leadership who wanted to return the civil society in the South as much as possible to what it had been before the Civil War, with the exception of not having the institution of chattel slavery in place.

One of the principal objectives of the Klan, from the earliest days of its founding, was to prevent the newly freed slaves from exercising the right to vote that had been granted to them by the 14th (1868) and 15th (1870) Amendments to the Constitution. The language of the latter is particularly instructive: "1. the right of citizens of the United States to vote shall not be denied or abridged by the United States or by any State on account of race, color, or previous condition of servitude. 2. The Congress shall have power to enforce this article by appropriate legislation."

But with the power first of the Klan, with the ever-spreading denial of the vote to African-Americans, and then with the institution over a period of some years of what was called the "Jim Crow" laws by the Democratic Party in the South, African-Americans were indeed systematically denied the right to that had being guaranteed to them by the 15th amendment.

The reality that casts a shadow over Selma is that it did not end the struggle for civil and voting rights for people of color in the United States. As I pointed out in recent column, except for the literal abolition of chattel slavery, in terms of its central goals, the South essentially won the Civil War. One the many tragedies of Selma is that one of the two major U.S. political parties still runs in part on racism, just as the old Southern Democratic Party of the time did. The story of how Nixon took the "Southern Strategy" that had been originally invented, but not in a formal way, by Barry Goldwater, and broadly implemented it for the GOP, and how Ronald Reagan cemented it in place need not be re-told here.

Indeed it is also a tragedy that the Voting Rights Act for which so many whites and African-Americans had fought so hard for so many years has been recently been gutted by the Republican Supreme Court. (That is the same Republican Court that may be on its way to gutting the Fair Housing Act as well.) It is a tragedy that indeed Martin Luther King's words 50 years ago, about segregation and discrimination, about racism, about the lack of economic justice for non-whites (and now, of course, increasingly for many whites as well) still, as the Southern Poverty Law Center points out, cry out for justice to this day. Dr. King's vision of a civil rights-labor alliance, which has never been achieved, echo down to us today as well. It is a tragedy that off-duty black police officers need to fear white cops just as black young men who "don't look right," like New York Times columnist Charles Blows' son at Yale, do.

It is a tragedy that voter suppression, aimed at African-Americans and other population groups who tend to vote for Democrats, has become an official policy of the Republican Party, under the guise of "battling voter fraud" (which happens to be virtually non-existent, and even if it weren't could easily be dealt with by offering free, easy-to-obtain voter ID cards). It is a tragedy that lynching, a major tool of black-suppression in the Jim Crow South, which was dying out by the time of "Selma," has returned to this country in the form of white police officers killing black young men at an astounding rate.

Now let us turn briefly to "Selma," the movie. First, of course is the fact that when it came to Academy Award nominations (not the awards themselves), while the movie itself did receive one for Best Picture, the Director, Ava DuVernay, and the lead actor, David Yellow, who had received awards and nominations elsewhere were complete shut out. That is itself a legacy of racism, given the excellence of the film.

Second, in much of the mainstream media discussion of the issues of the movie and how the primary ones remain with us down to this very day because of the policies and politics of one of our two leading parties, got glossed over. They were actually submerged, is more like it, by the flap over whether or not the movie and its writers/director gave credit where credit was due to the role of Lyndon Johnson in bringing forth the Voting rights Act and was a fair representation of the relationship between the President and Doctor King . To me, as my regular readers will know well, this is largely irrelevant. Where exactly LBJ was in the time-line pales before the fact that he did bring the Voting rights Act forward, that he did send federal troops to defend the Selma marchers against the local police/sheriffs. And that he did stand down the racists J. Edgar Hoover and George Wallace.

The bottom line, which really has been lost, is that the South did win the Civil War and one of our two major political parties runs openly and shamelessly on racism (as well as religious authoritarianism and the demonization of various "others"). These are two of the major issues facing this country now just as they were back at the time of Selma. That is the principal tragedy of the movie.

Steven Jonas, MD, MPH, MS is a Professor Emeritus of Preventive Medicine at StonyBrookMedicine (NY) and author/co-author/editor/co-editor of over 35 books. In addition to his position on OpEdNews as a "Trusted Author," he is a Senior Editor, (more...)
Related Topic(s): African-americans; America; Democrats; Hate-Racism-Bigotry; Race; Republican; Rights; Segregation; Slavery; South; (more...) State; Tragedy; Voting, Add Tags  (less...)
Add to My Group(s)
Go To Commenting
The views expressed herein are the sole responsibility of the author and do not necessarily reflect those of this website or its editors.