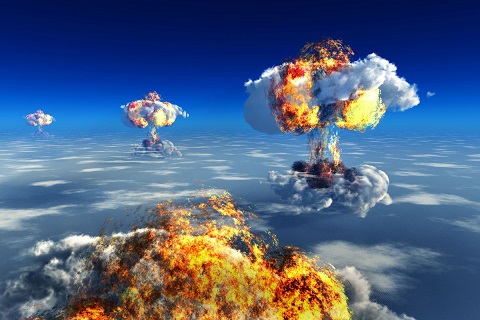 US Air Force Gen. Tod D Wolters told the Senate this week he "is a fan of flexible first strike" regarding NATO's nuclear weapons, thereby exposing the fatal fallacy of the alliance's embrace of American nuclear deterrence policy.

It was one of the most remarkable yet underreported exchanges in recent Senate history. Earlier this week, during the testimony before the Senate Armed Services Committee of General Tod Wolters, the commander of US European Command and, concurrently, as the Supreme Allied Commander in Europe (SACEUR) also the military head of all NATO armed forces, General Wolters engaged in a short yet informative exchange with Senator Deb Fischer, a Republican from the state of Nebraska.

Following some initial questions and answers focused on the alignment of NATO's military strategy with the 2018 National Defense Strategy of the US, which codified what Wolters called "the malign influence on behalf of Russia" toward European security, Senator Fischer asked about the growing recognition on the part of NATO of the important role of US nuclear deterrence in keeping the peace. "We all understand that our deterrent, the TRIAD, is the bedrock of the security of this country," Fischer noted. "Can you tell us about what you are hearing"from our NATO partners about this deterrent?"

Wolters responded by linking the deterrence provided to Europe by the US nuclear TRIAD with the peace enjoyed on the European continent over the past seven decades. Fischer asked if the US nuclear umbrella was "vital in the freedom of NATO members"; Wolters agreed. Remarkably, Wolters linked the role of nuclear deterrence with the NATO missions in Iraq, Afghanistan and elsewhere outside the European continent. NATO's mission, he said, was to "proliferate deterrence to the max extent practical to achieve greater peace."

Then came the piece de resistance of the hearing. "What are your views, Sir," Senator Fischer asked, "of adopting a so-called no-first-use policy. Do you believe that that would strengthen deterrence?"

General Wolters' response was straight to the point. "Senator, I'm a fan of flexible first use policy."

Under any circumstance, the public embrace of a "flexible first strike" policy regarding nuclear weapons employment by the Supreme Allied Commander in Europe should generate widespread attention. When seen in the context of the recent deployment by the US of a low-yield nuclear warhead on submarine-launched ballistic missiles carried onboard a Trident submarine, however, Wolters' statement is downright explosive. Add to the mix the fact the US recently carried out a wargame where the US Secretary of Defense practiced the procedures for launching this very same "low yield" weapon against a Russian target during simulated combat between Russia and NATO in Europe, and the reaction should be off the charts. And yet there has been deafening silence from both the European and US press on this topic.

There is, however, one party that paid attention to what General Wolters had to sayRussia. In a statement to the press on February 25the same date as General Wolters' testimony, Sergey Lavrov, the Russian Foreign Minister stated that "We note with concern that Washington's new doctrinal guidelines considerably lower the threshold of nuclear weapons use." Lavrov added that this doctrine had to be viewed in the light "of the persistent deployment of US nuclear weapons on the territory of some NATO allies and the continued practice of the so-called joint nuclear missions."

Rather than embracing a policy of "flexible first strike", Lavrov suggested that the US work with Russia to re-confirm "the Gorbachev-Reagan formula, which says that there can be no winners in a nuclear war and it should never be unleashed." This proposal was made 18 months ago, Lavrov noted, and yet the US has failed to respond.

Complicating matters further are the 'Defender 2020' NATO military exercises underway in Europe, involving tens of thousands of US troops in one of the largest training operations since the end of the Cold War. The fact that these exercises are taking place at a time when the issue of US nuclear weapons and NATO's doctrine regarding their employment against Russia is being actively tracked by senior Russian authorities only highlights the danger posed.

On February 6, General Valery Gerasimov, the Russian Chief of Staff, met with General Wolters to discuss 'Defender 2020' and concurrent Russian military exercises to be held nearby to deconflict their respective operations and avoid any unforeseen incidents. This meeting, however, was held prior to the reports about a US/NATO nuclear wargame targeting Russian forces going public, and prior to General Wolters' statement about "flexible first use" of NATO nuclear weapons.

In light of these events, General Gerasimov met with French General Fançois Lecointre, the Chief of the Defense Staff, to express Russia's concerns over NATO's military moves near the Russian border, especially the Defender 2020 exercise which was, General Gerasimov noted, "held on the basis of anti-Russian scenarios and envisage training for offensive operations."

General Gerasimov's concerns cannot be viewed in isolation, but rather must be considered in the overall historical context of NATO-Russian relations. Back in 1983, the then-Soviet Union was extremely concerned about a series of realistic NATO exercises, known as 'Able Archer '83,' which in many ways mimicked the modern-day Defender 2020 in both scope and scale. Like Defender 2020, Able Archer '83 saw the deployment of tens of thousands of US forces into Europe, where they assumed an offensive posture, before transitioning into a command post exercise involving the employment of NATO nuclear weapons against a Soviet target.

So concerned was Moscow about these exercises, and the possibility that NATO might use them as a cover for an attack against Soviet forces in East Germany, that the Soviet nuclear forces were placed on high alert. Historians have since observed that the threat of nuclear war between the US and the USSR was at that time the highest it had been since the Cuban Missile Crisis in 1962.

US and NATO officials would do well to recall the danger to European and world security posed by the "Able Archer '83" exercise and the potential for Soviet miscalculations when assessing the concerns expressed by General Gerasimov today. The unprecedented concentration of offensive NATO military power on Russia's border, coupled with the cavalier public embrace by General Wolters of a "flexible first strike" nuclear posture by NATO, has more than replicated the threat model presented by Able Archer '83. In this context, it would not be a stretch to conclude that the threat of nuclear war between the US and Russia is the highest it has been since Able Archer '83.