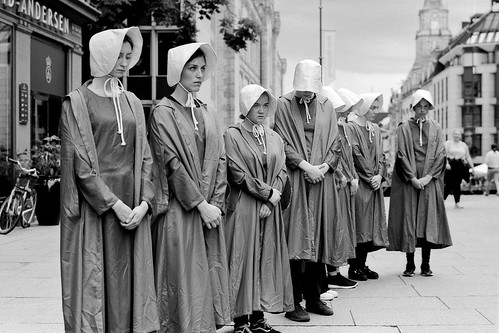 We don't need to read fiction about "handmaidens" to know what America is capable of when religious fanatics make and enforce law. This actually happened.

Back on August 30th, I wrote a Daily Rant here about how hate, misogyny and the use of religion to control Americans was nothing new. That was before the Texas Abortion Bounty Hunter Law was allowed to go into effect by the Supreme Court.

In that Rant I included a few verses from John Greenleaf Whittier's poem, first published in 1894, titled How The Women Went From Dover. Given the events of last week, it's worth reading in its entirety as a reminder of what happens when "religious" men assert their claim to power over women's minds and bodies.

It's based on the true story of 3 women, Anne Coleman, Mary Tomkins, and Alice Ambrose, whose crime was adhering to and promoting nonviolent and woman-respecting Quakerism in a rabidly rightwing fundamentalist 100% male-run "Christian" town.

Their assertion of a woman's right to speak publicly about religion and morality so enraged the minister of Dover's Congregational church, John Reyner, that he and church elder Hatevil Nutter (yes, that was his real name) lobbied the crown magistrate, Captain Richard Waldron, to have them punished. The warrant, which Whittier reprinted in his 1894 book of poems, is also at the bottom of this page.

They were stripped naked to the waist, whipped till bloody, and then dragged in the snow, tied by their wrists to the back of a horse-drawn cart, through two New England towns. In the third, Salisbury, Sergeant Major Robert Pike stepped in and stopped the torture, which was supposed to extend to 11 towns altogether. He and Dr. Walter Barefoot dressed their wounds and gave them shelter in Maine.

We don't need to read fiction about "handmaidens" to know what America is capable of when religious fanatics make and enforce law. This actually happened.

HOW THE WOMEN WENT FROM DOVER
by John Greenleaf Whittier

THE tossing spray of Cocheco's fall
Hardened to ice on its rocky wall,
As through Dover town in the chill, gray dawn,
Three women passed, at the cart-tail drawn!

Bared to the waist, for the north wind's grip
And keener sting of the constable's whip,
The blood that followed each hissing blow
Froze as it sprinkled the winter snow.

Priest and ruler, boy and maid
Followed the dismal cavalcade;
And from door and window, open thrown,
Looked and wondered gaffer and crone.

'God is our witness,' the victims cried,
We suffer for Him who for all men died;
The wrong ye do has been done before,
We bear the stripes that the Master bore!

And thou, O Richard Waldron, for whom
We hear the feet of a coming doom,
On thy cruel heart and thy hand of wrong
Vengeance is sure, though it tarry long.

Related Topic(s): Christofascists; Fascism-Cant Happen Here; Texas Taliban, Add Tags
Add to My Group(s)
Go To Commenting
The views expressed herein are the sole responsibility of the author and do not necessarily reflect those of this website or its editors.