This article in the popular blog, Next Big Future, about the skyrocketing incidence of obesity - including the source articles here, and here - is a bit simple.

While focusing on portions and food categories, like meat vs. fruits, it fails to take fully into account the effect of different food (or, food-like) choices on obesity. 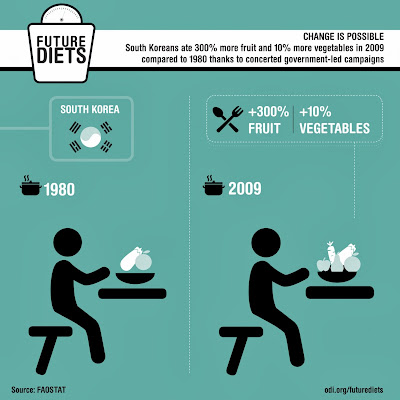 Despite what the articles imply, or say outright, about fat consumption from meats, etc., there's actually no evidence that high protein, i.e. meat, diets per se, cause obesity   - just ask any traditional Eskimo or Aboriginal hunter, who tend to be lean and fit.  Of course, we don't have anywhere near the kind of calorie-consuming lifestyle a hunter-gatherer had.   We do work longer to get the food we need (or, more precisely, to get everything else), but the hunter-gatherer worked much harder for his or her food.

However, there's increasing evidence that artificially sweetened/salted foods make us crave more calories than we would if we ate more "normal" food.  See, for example, Morgan Spurlock's movie "Supersize me" in which Spurlock goes on an all-McDonald's diet for a month, with both humorous and tragic results.

Besides Big Macs, it's possible, and probable, that "no one can eat just one" Lays potato chip (or Oreo cookie, pretzel, 8oz. soda, etc.), but binging on apples or even plain cooked (not fried) chicken is actually pretty hard to do.  The Food Manufacturers (and, think for a moment, how strange that phrase ought to sound, but doesn't anymore, since food became "made" instead of "grown") have gotten very good at fooling our pallet into wanting more than our bodies need.  The flip side of that is that food-like substances have become calorie-delivery vehicles, not even fully digestible.   I once saw one of those pill-cams -  comparing some regular noodles with Romen Noodles after a few hours, then days.  The latter was so undigested it was fully recognizable, meaning no nutrients, or very few, were being absorbed.  The Romen literally just "sits there" in your stomach, leaving you hungry for more calories, triggering more eating, until...well, you get the idea.  So, even though there are not many calories in Romen Noodles, what calories there are, are literally "junk calories."

Of course, our whole agriculture sector is set up to support a very few monoculture crops, particularly High Fructose Corn Sugar (HFCS).  Thank you, Earl Butts!.  This is great for John Deere and other high tech, low labor/low land productivity-per-acre farming, and lousy for the national, and increasingly, the international, diet.  (I have a couple of cousins who work in both the farming and farming supply industries in Iowa - the corn belt - and they basically tell me it is all but impossible to get off the corn-based farming model due to the complexity of alternate farming vs. the debt-based farming model, where this year's tractor is paid for by the high but simple yield of monoculture using that same tractor/fertilizer input combined with low labor costs).

The truth is, we not only have to work on the end result in diet, as the NYC soda ban - parodied by the Daily Show, as shown in the clip on the NBF blog, shows - but on the agriculture policy as well, to encourage more small scale farming, and less vast land-rich, but nutrient-poor, farming.  We could start by taxing the land more heavily and the food grown on it (production) less, or not at all.  This Georgist tax would have the salutatory effect of encouraging less pollution too, more recycling, including of animal manure for fertilizer and even fuel, and better soil management (even Henry George wrote alarmingly of the loss of top soil in the pre-fertilizer days of 1883 - p. 234, Social Problems).  If we untaxed labor as well, in favor of taxing land instead, farmers could hire more help and have a healthier, more diversified farm as well, albeit one on less acres.   This would do much more to support the "family farm" than all the political bloviating that substitutes for policy.   It would also do more for the healthcare crisis than Obamacare, or any other endgame policy that is too little, too late, and too wrong.  We have to get back to the source of our food: the Land.

Related Topic(s): Diet And Health; Diet Dieting; Farming; Food; Georgist; Healthcare; Healthcare; Obamacare; Policy, Add Tags
Group(s): Common Ground NYC, Add to My Group(s)
Go To Commenting
The views expressed herein are the sole responsibility of the author and do not necessarily reflect those of this website or its editors.

STAY IN THE KNOW
If you've enjoyed this, sign up for our daily or weekly newsletter to get lots of great progressive content.
Series: "Economic Reform"