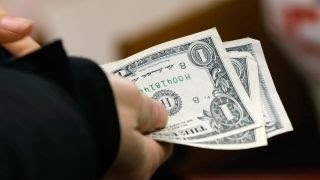 The centerpiece of the tax bill the Republicans pushed through Congress last fall was a big cut in the corporate income tax rate from 35 percent to 21 percent. It also included a number of other provisions designed to reduce corporate taxes, such as exempting most foreign profits from US taxes.

While the immediate beneficiaries of the tax cut were people who held large amounts of stock, the Trump administration claimed that workers would benefit even more. Their argument was that the lower tax rate would trigger an investment boom.

Increased investment would lead to more rapid productivity growth, which in turn, would translate into higher wages. By the end of a decade, the increase in wages through this channel was supposed to be at least three or four times the size of the tax cut.

At this point, the benefits to shareholders from the tax cut are clear. Stock prices rose last fall as the prospects of congressional approval of the tax cut increased. Many large companies announced big stock buybacks, as they decided to pass their tax cut directly onto shareholders.

Some companies did announce pay increases, or more typically one-time bonuses, following the tax cut, but the increases going to workers are a small fraction of the money being used to buy back stocks. Many tax cut critics had pointed to this imbalance as evidence that workers will not benefit to any substantial extent from the tax cut.

Although there is little doubt that the initial split on the tax cut overwhelmingly benefited shareholders rather than workers, if we take the Republican story seriously, this is not supposed to be how workers would benefit from the tax cut. Workers were to benefit when companies would undertake a massive wave of investment, which would increase productivity, and thereby raise wages.

If we want to see whether the Republican story is panning out, we should focus on investment. Six months after the bill was approved by Congress, the picture does not look good.

Six months is still relatively early in terms of getting investment in place, so we should not be surprised if there are not a lot of new factories up and running or research labs developing software and drugs. However, six months is plenty of time for companies to make investment plans, especially since the basic outlines of the tax cut were already known at the end of last summer.

There are a number of different data sources that tell us about companies' investment plans, and none of them imply the investment boom promised by the Republicans. The broadest measure is the Commerce Department's monthly data on orders for new capital goods.

This measure, excluding volatile aircraft orders, was up in April, 5.6 percent from its year-ago levels. That's respectable growth, but nowhere close to the growth rate earlier in the recovery, which was in the double digits. Furthermore, this increase follows drops in 2015 and 2016 (caused by a collapse in world oil prices), so we are just now getting back to 2014 levels. That hardly fits the investment boom story.

Another measure of investment plans is the National Federation of Independent Business's (NFIB) survey of its members. The NFIB has been surveying its members on a variety of economic issues for close to 40 years.

One survey question asks businesses if they expect to undertake a major capital expenditure in the next six months. The percentage answering "yes" has edged up modestly to 30 percent in the May reading, but that is not much above the pre-tax cut levels. In fact, in August of 2017, this figure stood at 32 percent. In the pre-recession years, it was often over 35 percent. Again, there is not much evidence of an investment boom here.

The Philadelphia Fed reports that as of May, 30.9 percent of manufacturers in its district expected to increase capital expenditures over the next six months. That's down from an average of 38.6 percent with plans for an increase last year. No sign of an investment boom here.

Dr. Dean Baker is a macroeconomist and Co-Director of the Center for Economic and Policy Research in Washington, D.C. He previously worked as a senior economist at the Economic Policy Institute and an assistant professor at Bucknell University. (more...)
Related Topic(s): Corporate; Republican; Survey; Taxes; Workers, Add Tags
Add to My Group(s)
Go To Commenting
The views expressed herein are the sole responsibility of the author and do not necessarily reflect those of this website or its editors.