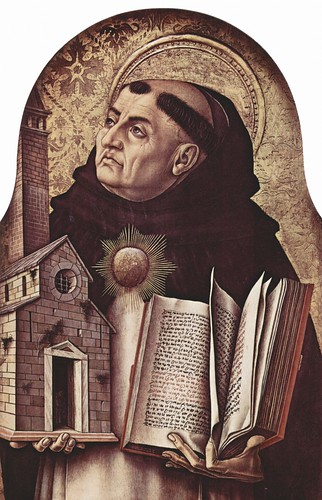 Duluth, Minnesota (OpEdNews) May 5, 2020: On two recent mornings, a mother fox and her cub got their morning exercise by running around, seemingly in close pursuit of one another, in my back yard and the adjoining back yards of my neighbors. Try to imagine them.

Keeping that image in mind, I now want you to imagine the mother fox as the famous and prolific thirteenth-century Italian Dominican theologian St. Thomas Aquinas (c.1225-1274) who, with the help of a team of four secretaries who took dictation from him, wrote his various treatises in Latin many of which have not yet been published in complete English translations (and probably never will be).

Next, I want you to imagine the cub as the then-Dominican American priest the Reverend Dr. Matthew Fox (born in 1940). So mother fox and cub. Next, we need to set them in motion running around in my back yard, seemingly in close pursuit of one another.

Now, for the creative 1992 550-page book Sheer Joy: Conversations with Thomas Aquinas on Creation Spirituality (San Francisco: HarperSanFrancisco), the Dominican cub Fox translated 52 of the Dominican mother fox's works in Latin and creatively assembled selected passages from them into four conversations about creation spirituality that really do sound conversational, as the cub Fox tries to keep up with the fast-moving mother fox:

In the cub Fox's "Introduction" (pages 1-55), he explains the four paths of creation spirituality that he has worked out in his other publications. This month, Ixia Press, an imprint of Dover Publications, is reissuing Sheer Joy. OEN readers engaged in peace and justice activism should read the "Fourth Conversation: On the Via Transformativa" to learn how the two Dominican foxes discuss God's peace and justice and compassion.

However, the cub Fox just couldn't stop his exuberant exercise of running around with the Dominican mother fox out of his system.

In the cub Fox's short new 2020 book The Tao of Thomas Aquinas: Fierce Wisdom for Hard Times, he extracts 31 key statements made by Aquinas in his 1992 book and uses them as his chapter titles, except for chapter 28 (which is a quote from Aquinas but from another book Fox wrote), providing a footnote reference to the relevant page in Sheer Joy (or the other book) for the interested reader to look up. Throughout the text, Fox quotes Aquinas frequently from 100 or so different pages of Sheer Joy (by my count of the parenthetical page references embedded in the text).

Here are the 31 chapter titles in The Tao of Thomas Aquinas:

1. The experience of God must not be restricted to the few or to the old (pages 1-7)

Related Topic(s): Compassion; God; Jesus; Mysticism; Peace; Prophet; Spirituality; Spirituality; Wisdom, Add Tags
Add to My Group(s)
Go To Commenting
The views expressed herein are the sole responsibility of the author and do not necessarily reflect those of this website or its editors.