A Story So Righteously Vicious

And His Followers Could Love It! 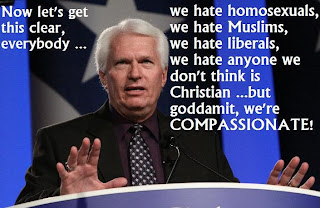 The story of Clay and Harold of Sonoma Co, CA has made the rounds on the web, so you might have already experienced the shock of the story. The 78-page suit (complaint) against the County of Sonoma makes for even more shocking reading. In a nutshell: Clay Greene, 78, was separated from his long time partner, Harold Skull, 88, after Harold was hospitalized. BOTH men were placed in nursing homes, all of their property sold off (even the cats were taken away!), Clay was prevented from seeing Harold and purposely kept unaware of his partner's condition.

Even when Harold died.

The County of Sonoma is now alleging that it was acting on behalf of Harold because there was domestic violence involved. Yeah, right. Look at the Bilerico Project response to the case. The county also described Harold and Clay as "roommates." Are disturbances between roommates considered "domestic" violence? How stupid is the County of Sonoma in saying that this was NOT a case involving gay partners? Do mere roommates have co-joining powers of attorney? Do mere roommates leave all of their property in each other's will? July 16th will be a date for everyone to mark: the case SHOULD receive a great deal of attention. The MSM, however, has failed to report on it at all. Hopefully, the power of the blogosphere will help to produce enough attention.

And the ties to the American Family Association?

The roots of the AFA's rabid homophobia go back as far as 1998, with conservative columnist Don Feder's rant in AFA's magazine, AFA Journal:

This is still (barely) a democracy. How many times do we have to say "no" - to domestic-partners ordinances, gay marriage, efforts to coerce the Boy Scouts and public school indoctrination - before the elite takes this resounding negative as an answer?

Rev. Dan Vojir is has been writing/blogging on religion and politics for the better part of ten years. A former radio talk show host (Strictly Books " Talk America Radio Network) and book publisher, Dan has connected with some of the most (more...)
Related Topic(s): American Facism; American Family Association; Anti-gay; Bryan Fischer; Christian-only; Christians Only; Family Research Council; Homophobia; Homophobic, Add Tags
Add to My Group(s)
Go To Commenting
The views expressed herein are the sole responsibility of the author and do not necessarily reflect those of this website or its editors.