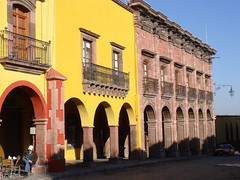 My Sacher Torte with Wesley

Dodging drums, the half-naked bodies and colorful feathered headdresses of the Concheros dancers celebrating in the zocalo, we hurriedly made our way to La Petit Four for a Mexican tradition of late afternoon caffeine and sugar, passing on hot chocolate and churros and opting for even richer French pastries.  Reeling from being flat broke and feeling the need to gripe, we decided to spend our last few pesos on the most mind altering combinations we could muster, espresso and Sacher torte for me, Wesley sizing up a cappuccino and éclair the size of a baguette with a glandular issue.

It was happy hour and the bars and cafes flanking the jardin were jolly with the semi-budget conscious and very thirsty dos-para-uno crowd.  But Wesley, readying himself for a serious weekend retreat at the local Buddhist meditation center didn’t feel he should arrive first thing in the morning with a mojito hangover.  Instead, bone grinding, barely legal doses of chocolate and caffeine, which would have the Maya hip bumping to Shakira on their mountain tiers.

He looked well but I could tell that something was amiss when my otherwise impeccably mannered friend stuffed a fork lift-sized bite of éclair into his mouth that wouldn’t allow for his lips to shut in a ladylike fashion.  “So,” I said, tossing back my oil thick espresso, “what are you going to wear to this meditation retreat?” I wanted to go, but couldn’t budget in the expense, meditating instead alongside my Sacher. And frankly, with my limited wardrobe, I wasn’t at all sure what the appropriate dress code would be for a two day event.  There is something about Buddhists, or those in training, that has always intimidated me and wearing anything that might single me out as unenlightened, ill-fitted, or these days, stained, was worrisome.

This man, all sweetness and class, was still shoveling the first bite down his tonsils.  He managed to roll his eyes at the question although he looked more like he was experiencing a tantric sex moment and of the three “purposes” of the tantra, it was definitely not the ecstasy of procreation but rather, pure, unadulterated  pleasure of the cocoa bean and a chocolate cream torpedo that could double as shower caulking.

“So, what DO you wear to a meditation retreat,” I asked again, the espresso kick-starting my annoyance button.

“Robes,” he gurgled, barely intelligible. “What did you think?”

I did my best Don Cicci, cocked my pinky just so and rested my empty demitasse on its saucer.  “I dunno,” I said, “all I have are jeans too tight in the waist for some reason and they might not be conducive to successful ohming and meditating.  I’m afraid if I did any deep breathing, I’d either pop the button or blow out the crotch.” I licked the last of my Sacher crumbs.

“Did I ever tell you about my months of silent meditation in a temple in Indonesia and the hot guru I then followed to the highest peaks of India and how a trio of us fled during the middle of the night ending up somewhere along the coast of Goa making love on the white sand beaches? If I only had audio, a decorative map, pointer, and stick drawings, I might have been impressed, but seeing the vision before me readying himself for a holier than thou retreat while sporting a pastry cream Soul Patch (or more appropriately, Bean Tickler) and even ickier due to a diminutive droplet that somehow reached his neck, a near Neck-dread of frothed filling, made my mind shift from holy shrines and selfless monks donned in thread-bare robes, to Bill and Ted and Kitty’s Excellent Adventure.

I relaxed a bit and figured if this guy could pass it off at a high falutin Buddhist retreat, the possibility of my snug fitting jeans blowing off my body like a denim mushroom cloud would fit right in.

Henry David Thoreau sporting a neckbeard or Neck-dread (a dreadlock formed from hair grown on the neck.) * Please note Thoreau’s beard was not formed from a cream filling but from shoo-fly pie.

Jan Baumgartner is the author of the memoir, Moonlight in the Desert of Left Behind. She was born near San Francisco, California, and for years lived on the coast of Maine. She is a writer and creative content book editor. She's worked as a (more...)

Related Topic(s): Culture; Living; Love; Maine; Mexico; Relationships; San Miguel De Allende; Satire; Sex; Travel, Add Tags
Add to My Group(s)
Go To Commenting
The views expressed herein are the sole responsibility of the author and do not necessarily reflect those of this website or its editors.

Regarding Mexico: Biased News, Half-Truths and Fear Mongering Fuel Paranoia of All Things South of the Border

Tamales and Tacos and Beers, Oh My!