GOP talk of resignations, rescheduled elections, and write-ins neglects the reality on the ground in Alabama: Moore has a credible opponent who can beat him. 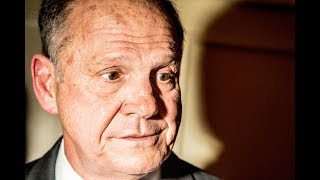 Roy Moore Threatens To Sue The Media For Reporting On Him
(Image by YouTube, Channel: Secular Talk)   Details   DMCA

Republican elites feel so entitled to the Alabama Senate seat that Jefferson Beauregard Sessions III vacated to become Donald Trump's attorney general that they are meticulously neglecting the easiest strategy for keeping Roy Moore out of the Senate.

Senate majority leader Mitch McConnell has called on Moore, the scandal-plagued former judge who now faces multiple allegations that as a 30-something prosecutor he molested teenage girls, to quit the Alabama race. But Moore's not quitting. In fact, he says McConnell should resign.

So DC Republicans are spinning complex scenarios for keeping Moore out of their caucus. The scenarios have grown increasingly arcane, and unworkable. But they keep coming.

There has been speculation that if Moore is elected in the December 12 special election, he could be seated and then expelled. But there's no guarantee that it will happen. Expulsions are rare, and there's a reason for that: A super-majority of senators -- two-thirds of the chamber -- is required to overturn an election result.

There have been suggestions that appointed Senator Luther Strange -- the guy Moore dispatched in an August Republican primary -- could resign and in so doing create a vacancy and would restart the process that began when Sessions quit. Or that Alabama's Republican Governor Kay Ivey could change the election date in order to give the Alabama Republican Party a sufficient window in which to replace Moore as their nominee. But Alabama Republicans appear to be determined to stick with Moore -- and the December 12 election date.

Then there are the proposed write-in campaigns: for Strange, for Sessions, for just about any Republican except Moore. But write-in victories are almost as rare as expulsions. And the wrong strategy for a write-in run could end up splitting the anti-Moore vote.

It's likely that McConnell and his compatriots will be proposing convoluted political "fixes." But none of them will be certain, or in some cases even likely, to block the judge.

Related Topic(s): Alabama Election; Choice; Democrat; Judge Roy Moore; Senate Race, Add Tags
Add to My Group(s)
Go To Commenting
The views expressed herein are the sole responsibility of the author and do not necessarily reflect those of this website or its editors.