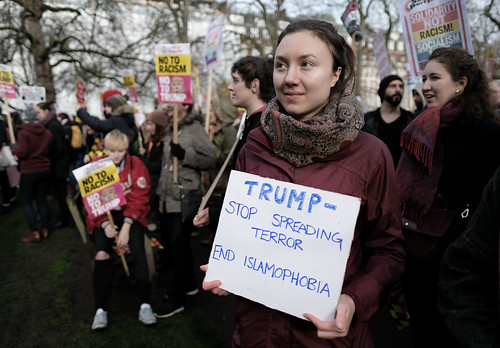 The Supreme Court Monday (June 25) allowed parts of President Donald Trump's controversial Muslim ban to go into effect and will hear oral arguments on the case this fall.

The apex Court ruled that despite rulings in two different federal courts - that the ban should be put on hold while judges decide whether it's constitutional - the Trump administration should be allowed to enforce the ban starting on Thursday, June 29, 72 hours after the court's ruling was issued.

However, people from the six countries listed in President Trump's travel ban "- Libya, Iran, Somalia, Sudan, Syria, Sudan, Yemen "- can travel to the U.S. if they possess a "bona fide" relationship with the U.S.

It is believed that the vast majority of people who would be coming to the U.S. from these countries can easily prove that relationship. Neither refugees being resettled in the U.S. nor visa holders will be impacted.

President Donald Trump was quick to celebrate the Supreme Court verdict by saying that the court's unanimous decision was "a clear victory for our national security".

"It allows the travel suspension for the six terror-prone countries and the refugee suspension to become largely effective," he said in a statement.

"As President, I cannot allow people into our country who want to do us harm. I want people who can love the United States and all of its citizens, and who will be hardworking and productive.

Shortly after the court issued its opinion, the American Civil Liberties Union (ACLU) said on Twitter it would "head back into court to fight the fundamentally unconstitutional Muslim ban this October".

Omar Jadwat, the director of the ACLU's Immigrants' Rights Project who had argued the case in court, said in a statement the travel ban "violates the fundamental constitutional principle that government cannot favor or disfavor any one religion". "Courts have repeatedly blocked this indefensible and discriminatory ban. The Supreme Court now has a chance to permanently strike it down," he said.

Lara Finkbeiner, from the International Refugee Assistance Project, which also sued the administration over the ban, said she was "incredibly disappointed with the decision". "We are a nation that values acceptance and diversity, and in making this decision and putting this executive order back into effect, the Supreme Court is sending a very clear message and it's putting the executive's discriminatory policy back into effect."

The Council on American-Islamic Relations, the country's largest Muslim civil rights and advocacy organisation, said the decision "ignores the Islamophobic origins of the policy" and emboldened Islamophobes in the Trump administration. "It also ignores the almost-unanimous rejection of the Muslim ban by lower courts due to its religious intolerance and racial animus," said Nihad Awad, the group's national executive director.

Both sides declared victory on the travel ban

Writing under the title "Both sides declared victory on travel ban" the Mother Jones said in different ways, both sides are right. It went to say: