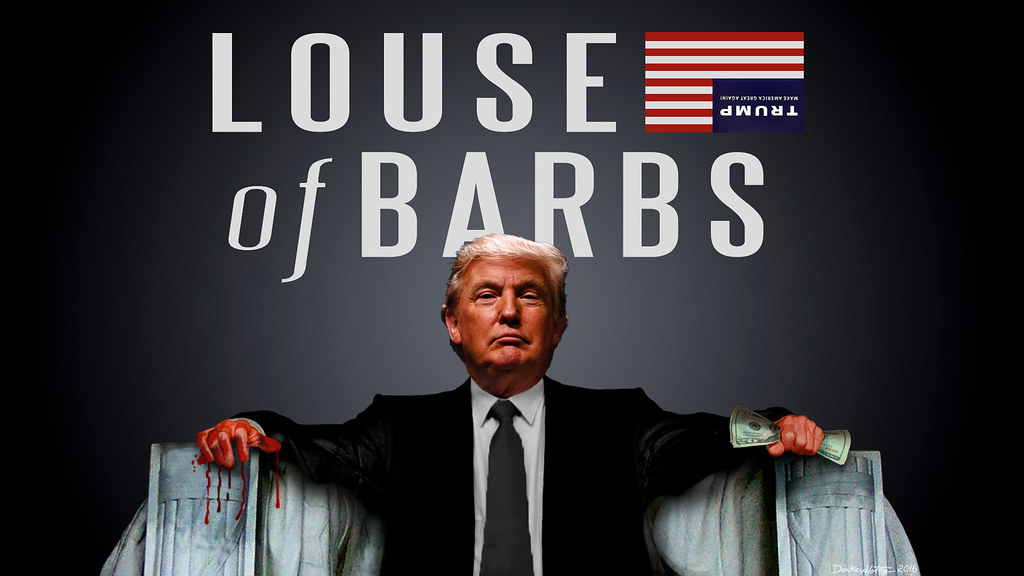 Louse of Barbs
(Image by DonkeyHotey from flickr)   Details   DMCA

Like a mob boss looking for payback, Donald Trump wanted the Supreme Court to do him two favors heading into the November election: keep him in power and keep him out of jail. To its everlasting credit, the court quickly declined to deliver on the first. Even though Trump had nominated three arch-conservatives to the bench -- Neil Gorsuch, Brett Kavanaugh and Amy Coney Barrett -- the court rejected his baseless challenges to the results of the election.

It took the court far too long to screw up the courage to decline the second favor, but in a one-sentence order issued on February 22, the court dismissed an emergency petition Trump's lawyers had filed last October to stop Manhattan District Attorney Cyrus Vance Jr. from enforcing a critical grand jury subpoena issued to the former president's accounting firm -- Mazars USA, LLP -- as part of a wide-ranging criminal investigation involving Trump's business practices.

Pending the court's ruling on the petition, Vance had agreed to pause enforcement of the subpoena. And in the meantime, as the court dithered, New York's five-year statute of limitations continued to tick away, threatening to derail the entire probe.

Of all the potential avenues for indicting Trump now that he is out of office and has lost the immunity from prosecution that comes with the presidency, Vance's probe, which began in 2018, offers the most immediate promise. Although New York grand jury proceedings are secret, it has been widely reported that Vance is investigating Trump not only for the hush money paid to pornographic film star Stephanie Clifford, aka "Stormy Daniels," and onetime Playboy Magazine model Karen McDougal, but also to determine if other aspects of Trump's private financial dealings have violated state fraud and income tax laws.

The Mazars subpoena is a key component of Vance's inquiry. It demands multiple years of Trump's personal and corporate federal and state tax returns and other financial documentation, dating back to 2011.

As some commentators have noted, information from Mazars could help prove that the Trump Organization used deceptive accounting techniques to inflate the value of assets when applying for bank loans and insurance, while understating values to reduce tax bills. Documents from Mazars could also help establish that Trump or members of his family acted with the knowledge and intent needed to prove the commission of financial crimes.

Usually, the Supreme Court rules on emergency petitions expeditiously, often within a matter of weeks, or even days. So, what was behind the inaction in this case? Was there a legitimate reason for the inordinate delay, or were political considerations in play?

The court itself isn't saying. Unlike elected politicians, the justices don't issue press releases or regularly speak to the media. In the absence of an official explanation, the reason for the delay appears to lie in the ideological orientation of the court, which has shifted sharply to the right since the death of Justice Ruth Bader Ginsburg last September.

The court's conservatives now outnumber its liberals, 6-3. They determine the substantive outcome of most cases as well as the timing of decisions. But despite the backbone they displayed in rebuffing Trump's 2020 election complaints, the conservatives may not have been willing to abandon Trump to deal with Vance and his prosecutorial team while he was still president.

Whatever the reason, there was no good excuse for the more than four-month delay on the Mazars subpoena, especially because the court was already familiar with the subpoena and the facts and issues it raised. Indeed, the subpoena was the subject of the court's historic 7-2 decision last July, which recognized the authority of a state grand jury to demand documents from a sitting president.

Writing for the majority in last year's case, Chief Justice John Roberts reached deep into the history of U.S. constitutional law, as I have noted before, citing the legendary Chief Justice John Marshall's approval of subpoenas issued to President Thomas Jefferson in the 1807 treason trial of Aaron Burr. Roberts' opinion was also layered with repeated references to the cases of United States v. Nixon and Clinton v. Jones.

In the process, Roberts rejected both the claim raised by Trump's private attorneys that sitting presidents enjoy "absolute immunity" from state criminal investigations, as well as an alternative contention advanced by the Trump Justice Department that state prosecutors must demonstrate a "heightened" standard of need before gaining access to the president's records.

Roberts and the majority, however, stopped short of ordering compliance with the subpoena. Instead, they remanded the case to the lower federal courts to permit Trump's attorneys to argue the subpoena was overly broad in scope and issued in bad faith. Afterward, in short order, both the federal district court judge assigned to the litigation in Manhattan as well as the 2nd Circuit Court of Appeals upheld the subpoena, setting the stage for the Supreme Court to resolve the matter once and for all.

Related Topic(s): Court Decision; Subpoena; Supreme Court; Supreme Court Hypocrisy; Trump Against Democracy; Trump Anxiety; Trump Attacks Impeachment; Trump Crime; Trump Finances; Trump Lawsuits, Add Tags
Add to My Group(s)
Go To Commenting
The views expressed herein are the sole responsibility of the author and do not necessarily reflect those of this website or its editors.

Can Putin and Russia be Brought to International Justice for the War in Ukraine? - Blumslaw

Unequal Justice: How the Highest Court Is Advancing Voter Suppression