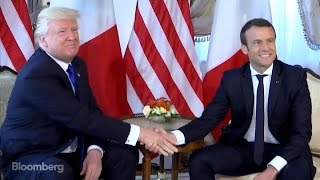 Macron The Sun King, a specialist in mergers and acquisitions, has had no trouble identifying and jumping into a vacuum, embracing Trump as The American Friend while the rest of the European Union remains predictably paralyzed by the ramifications of "America First."

jihadi-free future. China is already thinking of Syria as a BRI node.

Related Topic(s): Donald Trump; Emmanuel Macron; France; Friends; Iranian; Syria; Trade, Add Tags
Add to My Group(s)
Go To Commenting
The views expressed herein are the sole responsibility of the author and do not necessarily reflect those of this website or its editors.