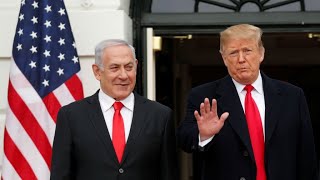 Part I -- Attacking the Progressive Past

The election of Donald Trump in 2016 and the re-election of Benjamin Netanyahu in 2019 occurred under different circumstances, and yet they are very similar in their results. They both put an authoritarian figure in power through democratic electoral procedures. As well, both of these figures, like so many modern reactionary leaders before them, denigrate the recent past. Why do they do so?

In the case of Donald Trump, the past he despises is the 1960s, with its progressive civil rights legislation. The laws passed at this time pushed the white supremacy model out of the public realm. Trump, in practice, has proven to be a white supremacist and an extreme nationalist. Most of his "core" voting base adheres to these ideas as well. This worldview demands that he undo through presidential orders and future decisions of the U.S. Supreme Court -- the progress toward equalitarianism and a multicultural society symbolized by the election of America's first African-American president, Barack Obama. Trump also wants to "Make America Great Again" by acting on the basis of national power alone -- thus destroying along the way any number of alliances and treaties enshrining human rights and progressive international law.

Of course, these ambitions alone are not exactly why he was elected. Trump's racist "core" is too small to have elected him by themselves. He was elected because too many Americans did not want to vote for Hillary Clinton in 2016 -- whom they saw as a status quo candidate -- and Trump was the GOP alternative. It may well be that a good number of the electorate who voted for Trump had no idea of what sort of person they were supporting. By now they should have no doubt.

In the case of Benjamin Netanyahu, the story is an even odder one. The past that Netanyahu rejects is the one designed after World War II to criminalize behaviors such as the waging of aggressive war, genocide, and apartheid. Some of these behaviors had for centuries threatened European Jews. Netanyahu, and those who voted for him, no longer identify with the suffering of their European ancestors. Israel is now a strong, aggressive, land-hungry power much like 19th century Russia and Germany. Many Israeli Jews are also, like Donald Trump's core supporters, ethnic racists and supremacists.

Netanyahu's problem is that the post-World War II international laws and treaties seeking to prevent aggressive nationalism, racism, and the oppression of minorities now stand in the way of Israeli ambitions. So, oddly, the only way Israel can realize its Zionist ambitions while also being seen as a "normal" country -- one that is in tune with the international community is by changing international norms. That is, Isreal now seeks to undermine the progressive international environment that was, in good part, designed to protect the remnants of European Jews. And it would seem, many of those who voted for Netanyahu knew exactly what sort of society they were endorsing.

Trump and Netanyahu both stand against minority members of their societies, and through such postures rally a dangerous core base. They are not alone. The nations of the world are increasingly led by reactionary "thugs in suits," many of them popularly elected. They are all Pied Pipers leading their populations backwardresurrecting the pre-progressive "past in present tense." Their destination is an environment that, historically, we have enough negative experience to want to avoid. Yet we follow these leaders anyway. To paraphrase Shakespeare in Julius Caesar, it is a case of "blind citizens governed by lethal idiots."

Evidence of this rush to the rear can be found in a partial list of the rights being undermined and the individuals being attacked:

A. Attack on a Free Press

The editor of Wikileaks, Julian Assange, is in prison in the UK after losing his seven-year-long asylum status at the Ecuadorian embassy in London. He will now have to fight extradition to the U.S. where he is wanted for posting on the web shocking evidence of shocking American barbarism in Iraq, as well as other embarrassing revelations.

Assange "has been charged for alleged conspiracy with whistleblower Chelsea Manning under the Computer Fraud and Abuse Act." The indictment also "describes routine journalistic interactions with sources as evidence of conspiracy." Thus, "the ability to use an encrypted chat messenger or try to keep a source's identity anonymous are ... portrayed as criminal in nature by the Trump Justice Department." By the way, that same Justice Department will argue that the nature of the leaked information, revealing the brutal and sometimes criminal behavior of the U.S. military, is irrelevant to the charge against Assange and therefore is inadmissible in court.

The larger problem with this attack on Assange is that his alleged "conspiring" to publish information gathered in this fashion is something reporters and newspaper editors do all the time. It is the essence of foundational investigative journalism, and as such the case against Assange is a threat to freedom of the press.

In the meantime, the Israelis have stepped into the act by falsely asserting that Assange is a longtime "anti-Semite."

Related Topic(s): America; Apartheid; Assange; Danger; Future; International; Zionists, Add Tags
Add to My Group(s)
Go To Commenting
The views expressed herein are the sole responsibility of the author and do not necessarily reflect those of this website or its editors.