UPDATE: It is now clear that by demonstrating the accuracy of its missiles, Iran has caused Washington and Israel to de-escalate after years of making dire threats against Iran. 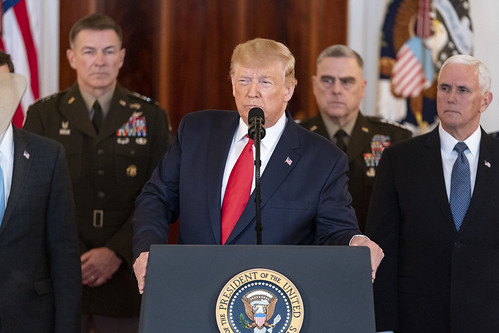 Readers are asking my take on the Iranian retaliation and Trump's response. I think a deal might have been arranged between Washington and Tehran via a third party. The Iranian attack resulted in no US casualties. Thus, it serves both Iran's purpose of retaliating and Trump's purpose of interpreting the Iranian retaliation to be, in effect, a stand down. Possibly Trump will apply "crippling sanctions" as a cover for withdrawal from most of the Middle East. Iran wants the US out, and Trump's original intention was to withdraw before Russia-gate forced him to stay. Thus, both Trump and Iran have a common interest in US withdrawal. Although the Iranian missiles killed no one, they did demonstrate to Israel that the Iranian missiles have pin-point accuracy. As Israel is a small land area, the accuracy of Iranian missiles possibly has changed Israel's mind about provoking a war. If Israel also stands down, perhaps the crisis is over.

On the other hand, the neoconservatives will be unhappy. They see chaos in Iran as a way of spreading instability into the Russian Federation. The military/security complex will be unhappy as US withdrawal would downsize their profits. US oil interests will be unhappy to lose the Iraqi oil.

Trump is in a better position now to stand up to these powerful interests. The war scare has introduced a sobering element. Republican senators have urged Trump to de-escalate. Russia, China, and Turkey have spoken against any escalation. The Barr-Durham investigation of the role of the military/security complex and Obama regime in orchestrating the "Russia-gate" hoax brings a sense of vulnerability to the CIA, FBI, and Obama Justice (sic) Department. Therefore, Trump possibly can turn the situation to the advantage of his original aim to withdraw from the Middle East and restore normal relations with Russia.

Trump's appalling decisions and explanations are largely a product of the vulnerable position he has been put in by three years of CIA, FBI, and Democratic Party efforts to remove him from the presidency. Now that vulnerability has shifted to his opponents, unless they physically assassinate him, Trump may yet prevail with his peace agenda.

Related Topic(s): Crisis; Iranian; Iranian General Killed; Israel; Neoconservatives; Russia-gate; Trump, Add Tags
Add to My Group(s)
Go To Commenting
The views expressed herein are the sole responsibility of the author and do not necessarily reflect those of this website or its editors.