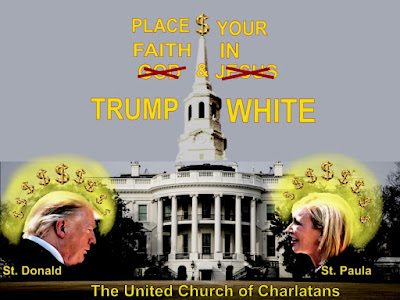 Alternate Fact: The Church of Greed and its Patron Saints
(Image by Rev, Dan)   Details   DMCA

What's next? Benny Hinn as Secretary of Defense? Can he cast out ISIS the way he casts out demons? ("Let the Bodies hit the floor"*)

As to the title of this article, one could argue that the Trump White House never had a shred of spiritual dignity in the first place, so I should have written something to the effect of "the last nail in a coffin". Sorry, my bad.

President Donald Trump's spiritual advisor and celebrity pastor Paula White is joining the White House staff working in the Office of Public Liaison at the White House. The office organizes and coordinates outreach to groups that helped secure the president's political base in the 2016 election.

She will advise the Trump administration's Faith and Opportunity Initiative, which concerns itself with boosting the influence of religious groups in certain government programs.

She will be primarily engaged in outreach towards Christian Conservatives before the 2020 presidential elections. Trump wants to increase support among evangelical Christians who he will need to win.

In other words, Paula White is THE point man, the one Evangelicals have to go to before currying favor with The Chosen One.

This week SBC adherents watched in (near) terror as prominent Southern Baptist pastors, including Franklin Graham, Jack Graham (no relation to Franklin or Billy), Robert Jeffress and Greg Laurie, tweeted their approval of a new book by Paula White, President Trump's spiritual advisor. In another time, these long-respected gospel preachers and conservative leaders would never have risked reputation and religious conviction to promote her.

Pastors who considered her a "heretic" are now lining up to receive a signed copy of her book.

The start of deception

From the start, it seemed as if White and Trump were in a conspiracy to deceive people about his supposed spirituality.

Her most famous fan is Donald Trump, whom she says "called her out of the blue" in 2015, repeated three of her televised sermons "verbatim,"and said she had the "it factor." (emphasis mine).

The sound of decimal-piercing "HUH!!s" and "WTFs" accompanied by millions of jaws dropping would not be inappropriate at this time. File the above with things you can't imagine Trump doing: repeating anyone else's words "verbatim" much less 3 sermons. That she had the nerve to say such a thing makes one realize that opportunists will do anything, say anything to curry favor with Trump. It surpasses Stephen Miller's statement that Trump is "perhaps the greatest orator in generations" as an assault on American intelligence.

White also said that Trump "100 percent is a Christian who understands " repentance," though, as his pastor, she said she wouldn't divulge what he has repented for.

Trump said that while he hasn't asked God for forgiveness, he does participate in Holy Communion.

"When I drink my little wine -- which is about the only wine I drink -- and have my little cracker,I guess that is a form of asking for forgiveness, and I do that as often as possible because I feel cleansed," he said. "I think in terms of 'let's go on and let's make it right.'" (emphasis mine)

Rev. Dan Vojir is has been writing/blogging on religion and politics for the better part of ten years. A former radio talk show host (Strictly Books " Talk America Radio Network) and book publisher, Dan has connected with some of the most (more...)
Related Topic(s): Benny Hinn; Bishop Eddie Long; Cindy Jacobs; Creflo Dollar; Franklin Graham; GOP War Conservative Vs Christian Right; Paula White; Spirituality And Politics; Trump Bible; Trump Religion, Add Tags
Add to My Group(s)
Go To Commenting
The views expressed herein are the sole responsibility of the author and do not necessarily reflect those of this website or its editors.