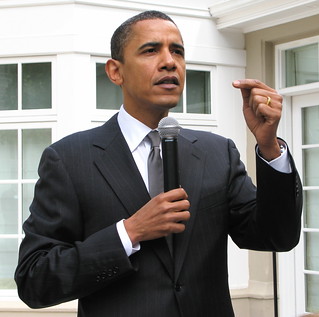 Statuesque Obama
(Image by jurvetson)   Details   DMCA
It is presumably but days before President Obama goes before the cameras to do what presidents always do in nominating someone for an important position: giving us the name, describing why this person would be an admirable choice for the job, and introducing us to the nominee.

But this is not the usual situation, and what is extraordinary in this situation requires the president to deliver a speech that goes beyond what presidents usually do for this sort of occasion.

So instead of the usual process the Constitution calls for, the President faces a battle over whether the Republicans will honor that traditional process, or will reject it so as to cling to the power the loss of Justice Scalia would otherwise legitimately entail for them.

The president has already admirably articulated his intentions with regard to choosing a nominee ("A sterling record. A deep respect for the judiciary's role. An understanding of the way the world really works. That's what I'm considering as I fulfill my constitutional duty to appoint a judge to our highest court.").

In that statement, he makes no mention of those who are making war on his rightful powers. But it is greatly to be hoped (though not all the signs are encouraging) that -as the responsibility gets passed to the Senate -- the president will not shrink from the confrontation that has been thrust upon him.

For much is at stake in this battle the Republicans have forced upon the nation. It is a battle that must be fought and won, and one that is the president's job, above all, to lead.

Here is what I'd have him say:

Andy Schmookler, an award-winning author, political commentator, radio talk-show host, and teacher, was the Democratic nominee for Congress from Virginia's 6th District. His new book -- written to have an impact on the central political battle of our time -- is
Related Topic(s): 2016 Elections; Obstructionism; President Barack Obama POTUS; Republican Party; Supreme Court SCOTUS, Add Tags
Add to My Group(s)
Go To Commenting
The views expressed herein are the sole responsibility of the author and do not necessarily reflect those of this website or its editors.