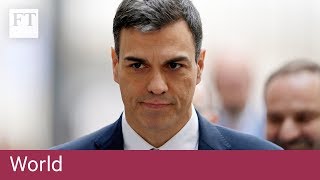 As the socialist-led government takes over in Spain, newly minted Prime Minister Pedro Sanchez faces at least two daunting tasks: cleaning up the wreckage wrought by years of European Union (EU) enforced austerity and resolving the Catalan crisis exacerbated by Madrid's violent reaction to last fall's independence referendum. Unfortunately, his Party's track record is not exactly sterling on either issue.

Sanchez, leader of the Socialist Workers Party (PSOE), patched together parties in Catalonia and the Basque region, plus the leftist Podemos Party, to oust long-time Prime Minister Mariano Rajoy of the People's Party (PP). But is the telegenic former economics professor up to the job, and will his Party challenge the economic program of the EU's powerful "troika" -- the International Monetary Fund, the European Central Bank and the European Commission?

The answers to those questions are hardly clear, and in many ways the cross currents and riptides of Spanish politics still resemble Gerald Brenan's classic study of the Civil War , The Spanish Labyrinth.

While the issue that brought Rajoy down was corruption -- a massive kickback scheme that enriched scores of high-ranking PP members -- his Party was already weakened by the 2015 election, and he has been forced to rely on the conservative Ciudadanos Party based in Catalonia to stay in power. In short, it was only a matter of time before he fell.

Sanchez promises to address the "pressing social needs" of Spaniards, although he has been vague about what that actually means. But Spain is hurting. While economic growth returned in 2013, unemployment is still at 16.1, and youth joblessness is 35 percent. Rajoy took credit for the economy's rebound from the massive financial meltdown in 2008, but there is little evidence that budget cuts and austerity did the trick. The two main engines for growth were cheap oil and a weak currency.

The job growth has mainly been in short term and temp jobs, with lower pay and fewer benefits. That is not specific to Spain, however. Of the 5.2 million jobs created in the EU between 2013 and 2016, some 2.1 million of them have been short term, "mini" jobs that have been particularly hard on young people. Many continue to live at home with their aging parents, and 400,000 have emigrated to other European countries.

Education, health care, and infrastructure have all deteriorated under a blizzard of budget cuts, and Sanchez will have to address those problems. His party's record on the economy, however, has been more centrist than social democratic, and the PSOE basically accepts the neo-liberal mantra of tax cuts, deregulation and privatization. It was PSOE Prime Minister Jose Zapatero who sliced more than $17 billion from the budget in 2010, froze pensions, cut child care funds and home care for the elderly, and passed legislation making it easier to lay off workers.

Conn M. Hallinan is a columnist for Foreign Policy In Focus, "A Think Tank Without Walls, and an independent journalist. He holds a PhD in Anthropology from the University of California, Berkeley. He oversaw the (more...)
Related Topic(s): Election; Labyrinth; Prime Minister Pedro Sanchez; Spanish, Add Tags
Add to My Group(s)
Go To Commenting
The views expressed herein are the sole responsibility of the author and do not necessarily reflect those of this website or its editors.