Click Here to Remove All Ads
Source: The Guardian
Beijing considers but rejects drone-killing an elusive foreign killer hiding in the jungle claiming sovereignty issues and the need for a trial 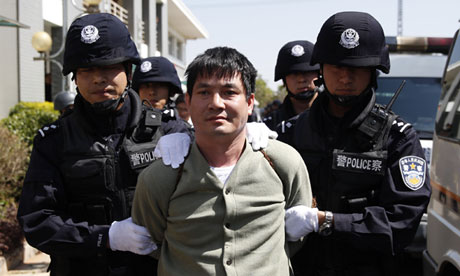 A heinous act of wanton slaughter, committed on 5 October 2011, dominated Chinese news for months. Two Chinese cargo ships were found adrift on the Mekong River, a major trade route for China, near the Thai-Burmese border, with 13 Chinese crew members brutally killed, summarily stabbed or shot with their hands bound behind their backs and their mutilated bodies dumped in the water. The Chinese government suspended passenger and cargo traffic on the river, while the Chinese public was furious at the government's failure to protect against violence on the Mekong and "increasingly critical of government agencies not perceived as taking a strong enough stand to defend the country."

The suspected mastermind of the massacre was quickly named by the Chinese: Naw Kham, the Burmese leader of the largest drug trafficking gang in the so-called Golden Triangle, where the borders of Myanmar, Laos and Thailand converge. A major manhunt for Naw Kham ensued under the direction of Liu Yuejin, head of China's antinarcotics bureau in its Ministry of Public Security. But it proved exceedingly difficult to find him because he was hiding in the vast mountainous jungles of Laos, which he knew well and which had a network of loyalists to protect him that included, according the experts in the region, operatives within the Burmese and Thai armies and the Laotian security forces.

Moreover, the Chinese were limited by both political constraints and technological capabilities in what they could do in that region. The Global Times noted that "some analysts had even said the hunt for Naw Kham could be as difficult as the hunt for Bin Laden," while Chinese newspapers quoted others as saying that "the overseas manhunt was more difficult than that of Osama bin Laden in Pakistan, in that the only preliminary clue [about Naw Kham] was a suspect portrait taken 20 years ago."