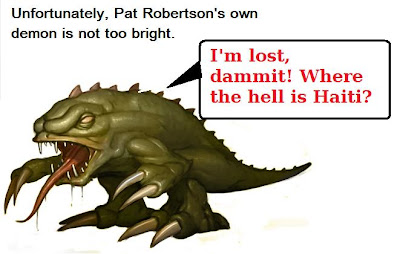 
When Christofascists start to bash their own, it's a truly wonderful sight: they turn away from hating everyone else and jockey for a slug at the worst of them just so they can look good in comparison. It's so deliciously rare that many of us ordinary people forget our struggles and stare in amazement ... and amusement. And when the MSM delves into past unpleasantness involving the said Christofascist, a pattern of vile un-compassionate Christofascists then turn on the person with lightning speed. While they do not devour him (although they want to), they make it known to everyone that such behavior is beneath them.
Now here's the official back-peddling from Robertson's PR team:

His comments were based on the widely-discussed 1791 slave rebellion led by Boukman Dutty at Bois Caiman, where the slaves allegedly made a pact with the devil in exchange for victory over the French. This famous history, combined with the horrible state of the country, has led countless scholars and religious figures over the centuries to believe the country is cursed.

Some of the highlighted words are buzz-words added to the context to make it seem as if Pat Robertson didn't just pick his vast knowledge on the subject out of a hat. Of course, when you view the entire footage of The 700 Club segment you realize that Robertson knows nothing about Haiti's history:
From wikipedia (under Boukman Dutty)

On 22 August 1791, Boukman presided in the role of houngan (priest) together with an African-born priestess and conducted a ceremony at the Bois Caïman and prophesied that the slaves Jean François, Biassou spiritual power of the forest and the ancestors, was sacrificed, an oath was taken, and Jean, not would-be leaders of a slave revolt that would free the slaves of Saint-Domingue. A pig, which symbolized the wild, free, and untamable Boukman and the priestess, exhorted the listeners to fight bravely against their oppressors. Days later the Haitian Revolution began.

Soon after the uprising began, French authorities captured Boukman and executed him by beheading. The French then publicly displayed Boukman's head in an attempt to dispel the aura of invincibility that Boukman had cultivated. However it remained strong, and their attempt failed.

And ever up-to-date wikipedia:

In the aftermath of the 2010 Haiti earthquake, the ceremony over which Boukman presided was called a "pact with the devil," responsible for a "curse" on the country, by Pat Robertson, host of The 700 Club on the Christian Broadcasting Network. Various prominent, mainline Christian voices have criticized Robertson's remarks on the Haiti crisis as untimely, insensitive, and not representative of Christian thought on the issue.

"It is absolute arrogance to try to interpret any of God's actions as a judgment against this person or that person. & Our duty as Christians is to try to help these people pray for these people and to help them."
- Dr. Robert Jeffress of the First Baptist Church of Dallas

"He must have misspoken. But we need to get on the path of helping people right now. God loves the people of Haiti. He hasn't turned his back on Haiti."

These were, of course, shining examples of pots calling the kettle black. Suffice it to say, however, that Robertson's little anecdote was received by other professionals as being in poor taste. Some even think that he's possessed by Satan:

It appears that televangelist Pat Robertson is in the thrall of Satan, according to spiritual warriors, Drs. Valerie Tarico and Marlene Winell. "It's the only possible explanation," said Tarico. "How else can we make sense of his repeated attempts to humiliate both God and Christianity in the wake of recent natural disasters."

[Dr. Winell] "Demons need a host, and they can jump from one person to another," she explained. "We know this because Jesus cast demons out of a possessed man and into a herd of pigs. The pigs drowned themselves, the same kind of self-destructive behavior we are seeing in Mr. Robertson. It is possible that he was infected at or around the funeral of Dr. Jerry Falwell. In hindsight we can see that Dr. Falwell was possessed by a similar--possibly the same-- demon."

And to give Rev./Dr./Broadcaster Robertson his due, there were some supporters:

"What the Robertson bashers left out is that finally, and with great compassion and concern in his voice, Pat said, "They need to have, and we need to pray for them, a great turning to God and out of this tragedy I am optimistic that some good thing may come, but right now we are helping the suffering people and the suffering is unimaginable."

Does God hate Haiti? God hates sin, and will punish both individual sinners and nations ... The earthquake in Haiti, like every other earthly disaster, reminds us that creation groans under the weight of sin and the judgment of God ... In other words, the earthquake reminds us that the Gospel of Jesus Christ is the only real message of hope.

Now several questions come into play: will Robertson himself issue some defense for his righteous intolerance and the denigration of an entire country? Probably not: his "apologies" for condemnation have, in the past, been choreographed rather sloppily, giving the impression that he doesn't really care what people think.

Another question lies in the context of which his "philanthropy" is placed: is he really just a benevolent but senile old man? This is getting to be his milieu-du jour. He may not like it, but the public is becoming increasingly annoyed at his utterings and mutterings. When you mention his name, eyes roll and people get that What-the-hell-is-that-old-coot-up-to-now? Look: "Did he leg-press an elephant this time?" "Which town is going to get a fearsome meteor shower because someone hung a gay rainbow flag in front of their home?" "What did God tell him this time? Any good bets on the fifth at the racetrack?" And at the end of each instance, Robertson seems oblivious to the contempt at which he is held. Senility can create an alternate reality for some people.

Rev. Dan Vojir is has been writing/blogging on religion and politics for the better part of ten years. A former radio talk show host (Strictly Books " Talk America Radio Network) and book publisher, Dan has connected with some of the most (more...)
Related Topic(s): Gary Cass; Hate-Racism-Bigotry; Huffington Post; Other Natural Disasters; People Falwell Jerry; People Jesus Christ; People Robertson Pat; Public Opinion US; STUPIDITY; Slavery; (more...) Southern Baptist Convention; Suffering, Add Tags  (less...)
Add to My Group(s)
Go To Commenting
The views expressed herein are the sole responsibility of the author and do not necessarily reflect those of this website or its editors.