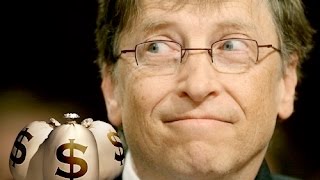 Sorry folks, this isn't Trump University, I don't have the plan for you to get rich quick. But it is important for everyone to understand exactly why Bill Gates is very rich. It's called "copyright protection."

If that sounds strange, imagine a world where everyone could make as many copies as they liked of Windows, Microsoft's Office Suite, and any other software at no cost. They would only have to send Bill Gates a thank you note, if they felt like it. Bill Gates is undoubtedly a very smart and ambitious guy, but in the world without copyright protection, it is highly unlikely that he would be the world's richest person.

This point may be simple and obvious, but it seems to have been lost on most of the people arguing about inequality. In these discussions we hear continual expressions of concern over how technology is behind the massive upward redistribution of income we have seen in the last four decades. This upward redistribution is usually treated as an unfortunate fact of nature. Even if we don't like to see the rich continually get richer at the expense of the rest of society, what can we do, stop technology?

This is sort of like a group of seriously overweight people struggling with ways to shed pounds as they gobble down their cheesecake and sip their non-skim latte. A little serious thinking could go a long way.

We grant patent and copyright monopolies in order to provide an incentive for innovation and creative work. It is arguable whether these mechanisms are the best way to provide these incentives. For example, in addition to making drugs very expensive, even when they would be cheap in a free market, patent protection also provides an enormous incentive for drug companies to misrepresent the safety and effectiveness of their drugs. But the key point for the inequality issue is that the strength and length of these monopolies is set by government policy.

We can think of these factors as being like a water faucet, if we want more incentives we make patents and copyrights longer and stronger, turning the faucet up. That means more money will go to people who benefit from owning patents and copyrights. This money will come out of the pockets of the rest of us when we pay higher prices for our drugs, software, and everything else subject to patent and copyright protection.

In the last four decades our policy has been very much in the direction of longer and stronger. In the case of copyrights, the term was lengthened to 55 years to 95 years. It was extended to digital media as the Internet developed. In fact, the government even prohibited the selling of various digital devices until they included effective locks that blocked unauthorized reproductions. Recent legislation has made Internet intermediaries into copyright cops, requiring them to police their sites to ensure they are not allowing for the unauthorized distribution of copyrighted material. The entertainment industry continually pushes measures like the Stop on Line Piracy Act (SOPA) which would make the copyright cop requirements even stronger.

Patent length has also been extended, going from 14 or 17 years from the date of issuance (depending on the type of patent) to 20 years from the date of application. The law also provides for extensions in the event the approval process was overly long. The scope of patentable products has been hugely expanded so that it now covers life-forms, software, and business methods. We have also made it far easier for individuals and corporations to obtain patents on research that was conducted largely with public funding. In addition, in the case of prescription drugs, we have added new forms of protection in the form of data and marketing exclusivity that preclude generic competition even in cases where there are no binding patents.

We have also pushed the case for patent and copyright protection overseas, making it a top priority in trade deals like the Trans-Pacific Partnership (TPP). Instead of using our economic and political power to push for things like labor rights or a better environment, we have demanded that other countries pay Disney more for its movies and Pfizer more for its drugs. In fact, one of the provisions in the TPP actually requires member countries to impose criminal penalties for some types of copyright violation.

These and other expansions of patent and copyright protection are all done out in the open. It's not necessary to gain access to secret files or have an informer with access to inside information. Anyone who cared would know that making these protections stronger has been a central tenet of the economic policy pursued by both political parties over the last four decades. The predicted and actual effect of this policy is to redistribute income to the owners of patents and copyrights, in other words to redistribute income upward.

It might seem obvious then, if the concern is the upward redistribution of income that we should look to weakening these protections. But somehow, the policy folks who debate inequality never seem to notice patents and copyrights. They just keep eating their cheesecake.

Dr. Dean Baker is a macroeconomist and Co-Director of the Center for Economic and Policy Research in Washington, D.C. He previously worked as a senior economist at the Economic Policy Institute and an assistant professor at Bucknell University. (more...)
Related Topic(s): Bill Gates; Copyright; Wealth Inequality, Add Tags
Add to My Group(s)
Go To Commenting
The views expressed herein are the sole responsibility of the author and do not necessarily reflect those of this website or its editors.