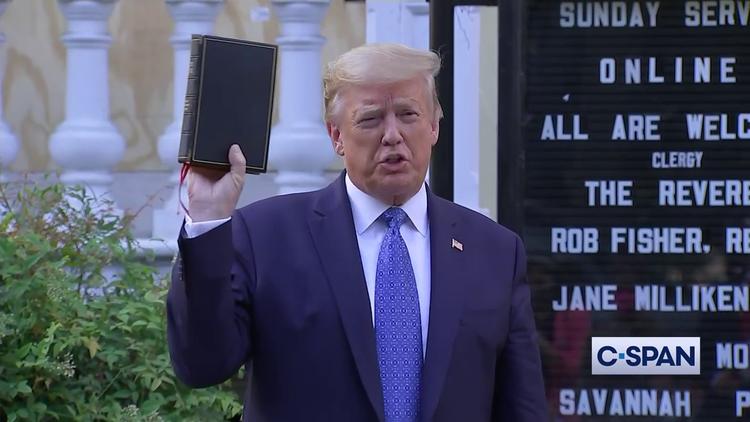 In 1848 a series of popular uprisings broke out in Europe, including in France. They largely failed, and authoritarian, right wing governments reasserted themselves until 1870. In 1851, France had the misfortune to fall victim to a coup by the nephew of Napoleon Bonaparte, Charles-Louis Napole'on Bonaparte, who styled himself Napoleon III. Karl Marx had been an enthusiastic supporter of the 1848 uprising, and viewed the coup as the work of a buffoon who had happened to put together an odd coalition of social classes -- business-people, aristocratic landlords, and a rabble of barely employed street peddlers and other workers with no consciousness of their own class interests. With his wicked wit, Marx saw Napoleon III as a dramatic come-down for France from the European-wide empire of Napoleon I. Marx wrote,

"Hegel remarks somewhere that all great world-historic facts and personages appear, so to speak, twice. He forgot to add: the first time as tragedy, the second time as farce."

We are, as Professor James Der Derian pointed out, in a similar time of farce.

Thomas Fleming writes in The Smithsonian Magazine that in 1814 Dolly Madison was glad of her husband and then president James Madison's...

"decision to station 100 militiamen under the command of a regular Army colonel on the White House lawn. Not only was it a gesture of protection on his part, it was also a declaration that he and Dolley intended to stand their ground. The president then decided to join the 6,000 militiamen who were marching to confront the British in Maryland. Dolley was sure his presence would stiffen their resolve."

True, these measures did not forestall a brief British capture, for 26 hours, of the capital, during which fires were set to the White House and the capitol but then extinguished by a hurricane that drove the British back to their damaged ships. This was during the astonishingly inaccurately named "War of 1812."

Still, Madison's attempt to stand his ground and his joining of the militiamen headed to Maryland were brave moves that reflected well on one of the greatest of American statesmen.

So much for tragedy.

In the past few days we saw the second defense of Washington, DC, by Donald J. Trump.

On Friday night as protesters approached the White House, Trump was rushed to a special bunker where he was secure from the shadowy Antifa menace of unemployed Starbucks baristas, Trotskyite undergraduates at George Washington University, and radical feminist dog-walkers from Adams Morgan.

After he thus covered himself in glory and the news got out, Trump was mortified and needed to reassert himself.

On Monday in a call with governors he berated them for looking weak. This is, I believe, called "projection" in psychiatry, though most psychiatrists have been stumped for the past three and a half years, which may account for their plummeting numbers in the Trump era.

SecDef Mark Esper, confusing largely peaceful protest of social injustice with Saddam Hussein's invasion of Kuwait, hearkened back to the language of his days as an infantryman in the Gulf War, and urged governors to "dominate the battle space" in putting down the Baathist African-American putsch in Louisville-on-the-Tigris. Arkansas Sen. Tom Cotton has cleverly escaped being committed to an asylum by standing next to Ted Cruz as much as possible, in comparison to whom he seems slightly sane. Occasionally the optical illusion evaporates, however, as when on Monday Cotton urged that the 101st Airborne Division be sent in and that they grant "no quarter" to looters, i.e., should shoot them on sight with no due process and no opportunity to surrender. However much he might be nostalgic for the days of American war crimes in Iraq, they cannot so easily be replicated in Oakland and Cleveland.

But the morphing of the tragic into farce was nowhere better exemplified than at the White House, where a petulant Trump, his face the color of a blood orange (what happens when he blushes) from having been exposed as a bunker-asylee, called out the military police to expel protesters illegally from LaFayette Park near the White House, so that he and his imperial coterie could walk to St. John's Episcopal Church, Trump could briefly raise a Bible, and then they could walk back.

Jared and Ivanka both came along even though neither could understand what the Anglican church had to do with it all. Was it that Henry VIII founded it and he also went through a lot of women, though he had more effective ways of getting rid of the ones that palled than a mere non-disclosure agreement? Javanka was unused to walking as opposed to being carried by corporals in palanquins, and agreed their scuffed Guccis needed immediately to be replaced.

Related Topic(s): Donald Trump Versus The Constitution; James Madison; Marx; Military; Trump Racist; Trump Religion; White House, Add Tags
Add to My Group(s)
Go To Commenting
The views expressed herein are the sole responsibility of the author and do not necessarily reflect those of this website or its editors.