Source: The Guardian
Ignoring the role played by US actions is dangerously self-flattering and self-delusional 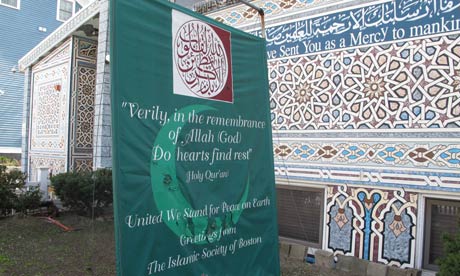 (Image by Unknown Owner)   Details   DMCA
A banner reading 'United We Stand For Peace on Earth' outside the Islamic Society of Boston mosque in Cambridge, Massachusetts. Photograph: Allen Breed/AP

News reports purporting to describe what Dzhokhar Tsarnaev told US interrogators should, for several reasons, be taken with a huge grain of salt. The sources for this information are anonymous, they work for the US government, the statements were obtained with no lawyer present and no Miranda warnings given, and Tsarnaev is "grievously wounded," presumably quite medicated, and barely able to speak.

That the motives for these attacks are still unclear has been acknowledged even by Alan Dershowitz last week ("It's not even clear under the federal terrorism statute that this qualifies as an act of terrorism") and Jeffrey Goldberg on Friday ("it is not yet clear, despite preliminary indications, that these men were, in fact, motivated by radical Islam").

Those caveats to the side, the reports about what motivated the Boston suspects are entirely unsurprising and, by now, quite familiar:

"The two suspects in the Boston bombing that killed three and injured more than 260 were motivated by the US wars in Iraq and Afghanistan, officials told the Washington Post.

"Dzhokhar Tsarnaev, 'the 19-year-old suspect in the Boston Marathon bombings, has told interrogators that the American wars in Iraq and Afghanistan motivated him and his brother to carry out the attack,' the Post writes, citing 'US officials familiar with the interviews.'"

In the last several years, there have been four other serious attempted or successful attacks on US soil by Muslims, and in every case, they emphatically all say the same thing: that they were motivated by the continuous, horrific violence brought by the US and its allies to the Muslim world -- violence which routinely kills and oppresses innocent men, women and children:

"If the United States does not get out of Iraq, Afghanistan and other countries controlled by Muslims, he said, 'we will be attacking US,' adding that Americans 'only care about their people, but they don't care about the people elsewhere in the world when they die' . ...

"As soon as he was taken into custody May 3 at John F. Kennedy International Airport, onboard a flight to Dubai, the Pakistani-born Shahzad told agents that he was motivated by opposition to US policy in the Muslim world, officials said."

When he was asked by the federal judge presiding over his case how he could possibly have been willing to detonate bombs that would kill innocent children, he replied:

"I am part of the answer to the US terrorizing the Muslim nations and the Muslim people. And, on behalf of that, I'm avenging the attack. Living in the United States, Americans only care about their own people, but they don't care about the people elsewhere in the world when they die."

Emails and other communications obtained by the US document how Shahzad transformed from law-abiding, middle-class naturalized American into someone who felt compelled to engage in violence as a result of the wars in Afghanistan and Iraq, drone attacks, Israeli violence against Palestinians and Muslims generally, Guantanamo and torture, at one point asking a friend: "Can you tell me a way to save the oppressed? And a way to fight back when rockets are fired at us and Muslim blood flows?"

"Your Honor, during the spring and summer of 2008, I conspired with others to travel to Afghanistan to join the Taliban and fight against the U.S. military and its allies. ... During the training, Al Qaeda leaders asked us to return to the United States and conduct martyrdom operation. We agreed to this plan. I did so because of my feelings about what the United States was doing in Afghanistan."

Related Topic(s): Islam; Muslim; Retaliation; Terrorism; Terrorism Islamic; Terrorism Terrorist Profiling, Add Tags
Add to My Group(s)
Go To Commenting
The views expressed herein are the sole responsibility of the author and do not necessarily reflect those of this website or its editors.