[First published by the Saker blog ] 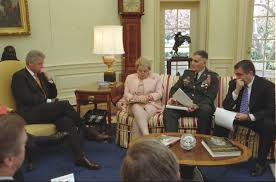 The Saker: Please introduce yourself and your past and present political activities.

Karganovic: My name is Stephen Karganovic. My background is Serbian, Russian, and Polish. On my father's side I have been able to trace family roots to the town of Khmelita, Smolensk district. In the first half of the 19th century Yuri Karganovich held the by then probably obsolete office of стольник (stolnik) in the regional town of Iskorosten. Perhaps because of my ethnically ecumenical background, I prefer to identify myself simply as an Orthodox Christian. I am a law school graduate, also with a degree in philosophy. I have never engaged in political activities as such. What interests me are issues with a moral dimension, and if they also happen to impinge upon politics, so be it.

The Saker: You are one of the best "Srebrenica specialists" out there. So, could you please in your own words describe, step by step, what actually took place in Srebrenica from the moment the Bosnian-Muslims raided the Serbian villages around Srebrenica to the moment the grand "genocide" strategic psy-op was launched.

Karganovic: I became interested in what happened in Srebrenica in July of 1995, during the Bosnian war, when in 2001 at the Hague I became involved in the defense of a Bosnian Serb officer accused of war crimes before the International Criminal Tribunal for the Former Yugoslavia. I was in America, of course, while the war was going on and knew nothing of Srebrenica at that time. Neither did I have any axe to grind in the controversies that sparked that conflict. I was raised and educated in the United States, had a very vague concept of my ethnic background(s), and neither I nor my family had suffered any detriment at the hands of the other contending parties, so I had no motive to favor one side or disfavor another. As we sifted through the evidence in order to construct a defense, I noticed that the prosecution's case consisted of broad allegations and was bereft of specific facts to support the grave charges laid against the defendant, which included genocide, an accusation that takes much highly technical evidence to prove. As I witnessed firsthand the unconventional legal procedures of the Hague Tribunal, which is a polite way of saying its complete alienation from the traditions of civilized jurisprudence, I became shocked. There did not seem to be much substance to the charge sheets. The remark once made by a hubristic US judge that "we can convict a ham sandwich," which sounded flippant to me when I read it many years ago, ultimately received its full embodiment in the operation of the Hague Tribunal, and I had a ring-side seat to watch that professionally unedifying show.

I went on to work in several other defense teams at the Hague in cases that were not related to Srebrenica. But to make the long story short, I quickly realized that Srebrenica was the mainstay of the Hague Tribunal, or ICTY, and that officially confirming the "genocide" and "8,000 men and boys" version of the narrative was its principal mission. I was bothered to see defendants convicted to decades-long imprisonment on the most heinous of charges and flimsiest proof, and a nation tarred with the most serious crime under international law, based on improvised and fabricated "evidence" that would not stand up in any non-political domestic court. So, I began to pay special attention to Srebrenica and to use the resources available to me at the Hague Tribunal to collect all the data I could lay my hands on about what happened there.

In 2008 at the Hague, under the laws of the Kingdom of the Netherlands, I founded a non-government organization "Srebrenica Historical Project," dedicated to a contextual, multi-disciplinary study of this issue. Our goal is to get to the bottom of what happened, and how and why. Our colleagues, whose research articles you can read on our website, are of diverse ethnic backgrounds and professional profiles. Almost none are Serbian. They have in common a critical approach and a desire to factually deconstruct what the late Prof. Edward Herman aptly called "the greatest triumph of propaganda at the close of the twentieth century." He was referring to Srebrenica, of course.

Instead of my presenting a possibly subjective account of what happened in Srebrenica, I recommend visiting our website. Our many authors give, I think, persuasive and factual answers to most Srebrenica questions.

The Saker: What has the impact of Srebrenica been on the Serbian people and the Serbian state? Who has benefited most from this?

Karganovic: Srebrenica's impact has been to bewilder the Serbian people, who are under the firm impression that they are victims, not perpetrators, of genocide. After bewilderment came indignant rejection of the Srebrenica smear. Western governments and the Soros organization have invested huge sums in Serbia into propping up a bevy of phony "NGOs" with the principal task of indoctrinating the public in the Srebrenica genocide guilt complex. Their efforts have been a dismal failure, notwithstanding the country's demoralized state and the covert support of Serbia's quisling governments. The goal, of course, is to further morally break down and emasculate the Serbian nation, to lay on them a paralyzing guilt trip and to render them submissive and obedient, apologizing and atoning forever for acts of moral turpitude that, unlike the Germans, they did not commit. So far, that particular "use of Srebrenica," as Diana Johnstone would put it, has been a resounding flop.

But another, and very lethal, use of Srebrenica has been a huge success. The Srebrenica narrative is the foundation stone and chief rationale of the "right to protect" (R2P) doctrine of cynical, predatory imperialist interventions that have destroyed and devastated a dozen mostly Muslim countries and claimed several million innocent Muslim lives. R2P's phony rationale is the supposed failure in July of 1995 of Western countries and NATO to act robustly to prevent the "Srebrenica genocide." Srebrenica as a metaphor for unbridled imperialist aggression has indeed been a slaughterhouse for Muslims, but not in Bosnia in 1995.

The Saker: Can you outline what is currently happening in Serbia? We hear of a possible conflict with the US-backed Kosovo Albanians, of a possible EU and/or NATO membership? What is really taking place?

Karganovic: In response to your question about what is happening in Serbia (I am in America right now) I will quote from an email that I received today from a friend who teaches at a university abroad but is currently on holiday in Serbia: "There are heavy rains and floods here Belgrade has been flooded twice with torrents sweeping away cars as if they were mere toys. There is general chaos in the entire country, and everything is falling apart. But the gang in charge are celebrating themselves as saints and saviors, and there seems to be nothing of greater importance to Serbs than to put on the shackles of the European Union!"

That is admittedly a pessimistic assessment, but I believe it to be close to the truth. Slavic nations generally are not politically sophisticated and can easily be fooled and manipulated by savvy conmen. The Ukraine is a notorious example. Serbs are not far behind; they have the political acumen of seven-year-olds. I read somewhere that young Germans nowadays watch Hitler's histrionics and wonder how their parents and grandparents could have been so simpleminded as to put their faith in that buffoon and accept his leadership. Future generations of Serbs will undoubtedly be reviewing the performance of the loathsome character who is running their country into the ground today and will wonder how their parents and grandparents could possibly have tolerated his obnoxious misrule.

As for the news of conflict with US-backed Albanians in Kosovo, on the part of the quisling regime there is neither the will nor the means to enter into such a confrontation. The regime was installed in order arrange for Serbia's legal renunciation of Kosovo and its capos are well aware that reneging on that commitment will have for them most unpleasant consequences. As for actually opposing anything, Serbia no longer has an army worthy of the name, hence no means with which to effectively assert or defend its interests. It is at the mercy of foreign imperialists and their bought and blackmailed local agents. NATO membership seems definitely on the horizon because incorporation in today's Axis is an essential component of the planned Ostfront war, as much today as it was in 1941.

Related Topic(s): Saker, Add Tags
Add to My Group(s)
Go To Commenting
The views expressed herein are the sole responsibility of the author and do not necessarily reflect those of this website or its editors.