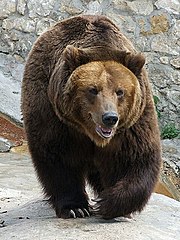 Russian Bear on the move
(Image by (From Wikimedia) User:Simm, Author: User:Simm)   Details   Source   DMCA
t, Germany -- Could anyone in the Obama administration have been so slow-witted to imagine that Russia wouldn't move hard to counter US efforts to overthrow Moscow's ally, Syria?

The Syrian war began almost five years ago by the US, France, Britain and Saudi Arabia to overthrow Syria's Iranian and Russian-backed government. The result so far: 250,000 dead, 9.5 million refugees flooding Europe and Syria shattered.

This is nothing new: the first CIA coup attempt to overthrow a Syrian ruler Gen. Husni Zaim was in 1949.

A combination of imperial hubris and ignorance has led Washington to believe it could overthrow any government that was disobedient or uncooperative. Syria was chosen as the latest target of regime change because the Assad regime -- a recognized, legitimate government and UN member -- was a close ally of America's Great Satan, Iran. Formerly it had been cooperating with Washington.

After watching Syria be slowly destroyed, Russia's President, Vladimir Putin, moved his rook onto the Syrian chessboard. For the first time since 1991, Moscow sent a small expeditionary unit of 50 warplanes to Syria both to shore up the Assad regime and to reaffirm that Russia has long-standing strategic interests in Syria.

Few of the administration's bumbling amateur strategists likely knew that Russia claimed during the 19th century to be the rightful protector of Mideast Christians. Russia watched in dismay the destruction of Iraq's ancient Christian communities caused by the overthrow of their protector, President Saddam Hussein. Moscow has vowed not to let a similar crime happen again to Syria's Christians.

Russia is also clearly reasserting a degree of her former Mideast influence. In 1970, Russian pilots tangled with Israeli warplanes over the Suez Canal during the "War of Attrition." The flying time from Moscow to Damascus is about the same as New York City to Miami. Syria is in Russia's backyard, not America's.

A highly effective propaganda war waged against Syria and Russia by the US, French and British media has so demonized Syria's President Assad that Washington will find it very difficult to negotiate or include him in a peace deal. The US made the same stupid mistake with Afghanistan's Taliban and now is paying the price.

Related Topic(s): Bashar Al-assad; Obama; Putin; Russian Foreign Policy; Syria, Add Tags
Add to My Group(s)
Go To Commenting
The views expressed herein are the sole responsibility of the author and do not necessarily reflect those of this website or its editors.