Then Unite Texas To Israel! 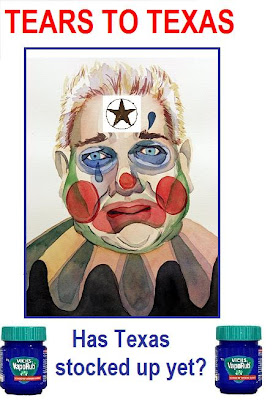 For the past several years, the state of Texas has been booming with radical Right Wing ideologies and uber-Christian Right authority over previously secular things (e.g. school boards changing textbooks to reflect a more Christian nation). And with an event like governor Rick Perry's The Response, Texas has inflated itself beyond recognition. To some people, in fact, Texas now looks like a clown car ready to burst.

BLAM! Glenn Beck has just announced that he will moving his family and base of operations to ... Texas! The nation's self-described rodeo clown will join the ranks of Rick Perry and some very serious Wingnuts!

As it turns out, anyone who speculated that Beck might be headed somewhere in America's heartland--closer to the core tea party-ing audience that consumes his sometimes controversial ramblings with an apostolic zeal -- was indeed correct. Beck confirmed on his daily radio program Monday that he, his family and part of his media empire are moving to Texas. He will open studios there for Mercury Radio Arts, the Manhattan-based production company behind both the radio show and his forthcoming Internet TV venture.

But wait, that's not all folks! As an added bonus, Beck has jokingly said to Governor Rick Perry that he might run for governor of the Lone Star State! That is, unless Perry decides to have Beck as his running mate on the Republican ticket!

OK, folks, let's be serious for a minute (it's hard, but we have to) and envision what Glenn Beck's move will mean to Texas and the rest of the country.

Glenn Beck will be neighbors with:

Rev. Dan Vojir is has been writing/blogging on religion and politics for the better part of ten years. A former radio talk show host (Strictly Books " Talk America Radio Network) and book publisher, Dan has connected with some of the most (more...)
Related Topic(s): Christian Right; Chuck Norris; David Barton; Glenn Beck; Israeli_Propaganda; John Hagee; Rick Perry; Right Wing Extremists; Rodeo Clown; Texas Secession, Add Tags
Add to My Group(s)
Go To Commenting
The views expressed herein are the sole responsibility of the author and do not necessarily reflect those of this website or its editors.