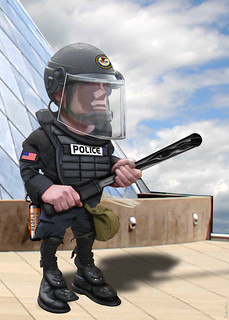 If someone has had the good fortune not to encounter the world of U.S. police and prisons, and the misfortune to learn about the world from U.S. schools, entertainment, and "news" media, a great place to start understanding one of the worst self-inflicted tragedies of our era would be with James Kilgore's short new book, Understanding Mass Incarceration: A People's Guide to the Key Civil Rights Struggle of Our Time, followed up by Radley Balko's longer Rise of the Warrior Cop: The Militarization of America's Police Forces.

Both books tell a story of gradual change over the past half-century that has resulted in the police going to war against people they were supposed to serve (call it a war on crime, a war on drugs, a war on terror, it's always in fact a war on people). And what do you do with people captured alive during a war? You lock them away as prisoners of war until the war ends. And if the war never ends? Well, then you bring back the death penalty, create life sentences for lots of crimes including for kids, impose mandatory minimums and three-strikes, and transform parole and probation from rehabilitation to reincarceration services.

The story of this gradual change is one of legal changes (court rulings and legislation), behavior, and popular belief -- with each of these influencing the other two in a vicious cycle. You can't quadruple a prison population in 40 years without instituting a different belief system. You can't ship black prisoners to be guarded by rural whites employed by for-profit companies, or lock up immigrants indefinitely while they await hearings, and not alter the belief system further. You can't run several successive election campaigns as contests in meanness and not see changes in policy and behavior. You can't give police military weapons and not expect them to adopt military attitudes, or give them military training and expect them not to want military weapons. You can't give crime 10 times the coverage on the "news" and not expect people to imagine crime is increasing. You can't start smashing in doors without alienating the police and the people from each other.

Kilgore reminds us that the popular movements of the 1960s had an impact on popular thought. Opposition to the death penalty peaked in 1965 and was over 50% from 1957 to 1972, dropping to 20% in 1990. In 1977 only 37% of people polled rated police officers' ethics as high, a number that rose to 78% in 2001 for no apparent substantive reason. As late as 1981 most Americans thought unemployment was the main cause of crime. We've since learned of course that crime is caused by evil demonic forces that possess the bad people of the earth.

The creation of the world's largest ever collection of permanent prisoners of war -- a trend that would translate perfectly to the war "on terror" abroad -- developed through cycles, including partisan cycles. That is to say, Nixon had a horrible impact, Carter briefly slowed the mad rush to prisonville, and Reagan and Bush built on Nixon's policies. The war on drugs was created as a means to militarize the police and involve the federal government in more local law enforcement, not the other war around. Reagan's attorney general announced early on that, "the Justice Department is not a domestic agency. It is the internal arm of the national defense." The end of the Cold War saw the military looking for new excuses to exist, and one of them would be the war on drugs.

When Clinton came along it again made a difference to have a Democrat in the White House, only this time for the worse. Bill Clinton and his would-be president wife and allies such as would-be president Joe Biden accelerated the march to suburban Siberia rather than slowing it. Under Clinton it became possible to throw people out of public housing for a single drug offense of any kind by anyone in the house. And yet Clinton was never evicted from his public housing despite the near certainty that someone in the White House used some kind of drug. Clinton brought us huge increases in incarceration, war weapons for police, and the shredding of social supports.

When the War on Terra began in 2001 whole new pathways to profit and police militarization opened up, including the beloved Fatherland's Department of Homeland Security, which has handed out tens of billions of dollars in "terror grants" that fund the terrorizing of the U.S. public. In 2006 the Buffalo, NY, police staged a series of drug raids they called "Operation Shock and Awe." Adding truly military grade incompetence to meanness, the New York Police Department raided an elderly couple's home over 50 times between 2002 and 2010 because their address had randomly been used as a placeholder in a computer system and remained in any report that had failed to include an address.

The arrival of Captain Peace Prize at 1600 Pennsylvania Avenue continued the trends and added an escalation of the war on immigrants, as well as of the war weapons for the police programs.

But the partisan cycles are more subtle as well. As Balko recounts, Congress members and others opposed police militarization when the president was of the other party and supported it when he was from theirs, or opposed it when the discussion focused on drugs but supported it in matters of gun-control (or vice versa). Yet, each acceptance was two steps forward and each resistance one step back, so that what was outrageous one decade became the norm in the next.

National partisan tides and vicious cycles of ever increasing militarization interacted over the years with local advances. Los Angeles, and the leadership of Darryl Gates, brought SWAT teams to U.S. policing. The name originally stood for Special Weapons Attack Teams and the tactics were literally a bringing of the war on Vietnam home as Gates consulted with the military to learn what was supposedly working in Vietnam.

Let me close with the question with which Balko begins his book: Are police constitutional? The police, prisons, parole, and probation did not exist when the U.S. Constitution was created any more than did drones or the internet. The first thing in the United States like police was the slave patrol. The first modern police force in the United States was begun in New York City in 1845. I've argued at length elsewhere that drones are incompatible with the Bill of Rights. What about police?

The Third Amendment grew out of resistance to allowing soldiers to engage in any of the abuses that constitute the work of police. Need we accept those abuses? I think we can at the very least radically reduce them. To do so we will have to declare an end to the wars abroad and the wars at home. Balko quotes former Maryland police officer Neill Franklin on what changing police attitudes will require:

"Number one, you've signed on to a dangerous job. That means that you've agreed to a certain amount of risk. You don't get to start stepping on others' rights to minimize that risk you agreed to take on. And number two, your first priority is not to protect yourself, it's to protect those you've sworn to protect." But that would mean not being at war with people.

David Swanson is the author of "When the World Outlawed War," "War Is A Lie" and "Daybreak: Undoing the Imperial Presidency and Forming a More Perfect Union." He blogs at http://davidswanson.org and http://warisacrime.org and works for the online (more...)
Related Topic(s): Police; Prisoners; Prisoners Of War, Add Tags
Add to My Group(s)
Go To Commenting
The views expressed herein are the sole responsibility of the author and do not necessarily reflect those of this website or its editors.