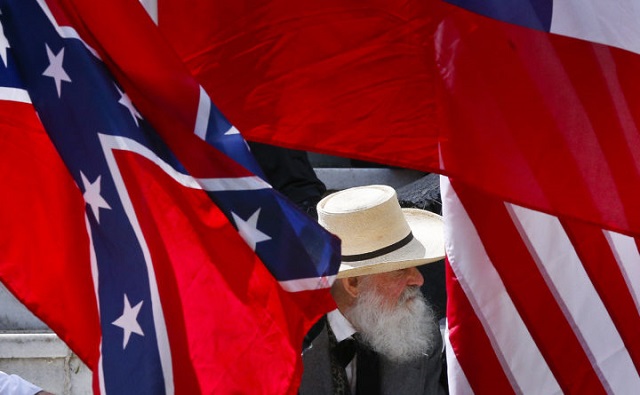 In the early 1970s, the Old Confederacy was reborn as the "New South." Although Richard Nixon's "Southern Strategy" saw the old Dixiecrat Democrats embrace the Republican Party, a wave of moderate-to-liberal Democrats swept into governors' mansions across the South. These included Jimmy Carter and Carl Sanders in Georgia, Terry Sanford in North Carolina, Reubin Askew in Florida, Albert Brewer in Alabama, Bill Waller in Mississippi, John West in South Carolina, and Ray Blanton in Tennessee. Even George Wallace, who returned to the Alabama governorship after a 1968 firebrand presidential run geared around segregation and an unsuccessful assassination attempt during his Democratic run for the White House in 1972, became known as one of Alabama's most progressive and inclusive governors in the state's history during his third and fourth terms in office.

Today, thanks to the "Trump Effect," the South is in full retrograde mode as it lunges for the past. A long-lead investigation led the editor this past week to travel to Alabama and the Florida Panhandle, as well as to deep behind the "Kudzu Curtain" in Mississippi.

Montgomery, Alabama, the scene of many epic moments in the civil rights movement of the 1960s, was ground zero for a drastic attempt to declare the Roe v. Wade Supreme Court decision of 1973 null and void. Alabama's Republican-controlled legislature passed one of the most draconian anti-women's reproductive health bills in the nation. The new law criminalizes all abortions, including those arising from rape, incest, and child sexual assault. Doctors performing pregnancy termination procedures, even to save the life of the mother, will face criminal prosecution and effective life imprisonment. A ten-year old girl victimized by a rapist is now required to carry a fetus to term. Because young girls lack the requisite pregnancy girdle for a utero birth, they must often deliver a child by Caesarian section, a physically traumatic procedure that can have deleterious effects on the future physical and mental state of a young rape victim.

But child rape, incest, and a mother's health are of no concern to a state where old white men are happy to vote for an accused pedophile like former Supreme Court Chief Justice Roy Moore for the U.S. Senate. Alabama is not only in full retrograde mode, but where it eventually ends up may, for women and girls, be worse than anything the state experienced during Jim Crow days.

Incidentally, African Americans in Alabama and Mississippi appear to have resigned themselves to the return of the Old South. Just a smile and a "good morning" from an old white guy with a Northern accent will surprise and brighten many African Americans working in stores and restaurants for measly minimum wage salaries and rotten working conditions. The looking down by black people when a white person approached was common when this editor attended the University of Mississippi in the early 1970s. That reflexive affectation has, unfortunately, returned during the Trump era.

While the University of Mississippi has liberalized greatly from the days when it took 30,000 federal troops and National Guardsmen to ensure the enrollment of a single black student, James Meredith, the presence of buildings on campus named after conservative Republicans like Trent Lott, Haley Barbour, and Thad Cochran mars a much-improved racial record. Gone from campus, fortunately, are the state flag of Mississippi, which bears the Confederate battle flag in the canton; the Colonel Rebel mascot; and other references to the Confederacy.

The biggest example of a return to the Old South is the continuing devastation wrought by Category 5 hurricane Michael along the Florida Panhandle, also known as the "Redneck Riviera." Ignored by the Federal Emergency Management Agency (FEMA); the Panhandle's two do-nothing Republican Congressmen, Neal Dunn and Matt Gaetz; GOP Senators Rick Scott, the former governor, and Marco Rubio; as well as Republican Governor Ron DeSantis, the Panhandle resembles a war zone seven months after the worst Gulf coast hurricane since Camille in 1969 struck the coast between Panama City and Port St. Joe. Apparently, Dunn has been doing nothing to help anyone but wealthy condo owners to recover from Michael. Gaetz has busied himself with witness tampering to help Trump weather a multitude of scandals. Rubio and Scott are more concerned about launching wars against Venezuela and Cuba than in dealing with the virtual war zone caused by Michael. Who the hell knows what DeSantis is doing for the Panhandle after his 2018 gubernatorial campaign marked by endorsements and cash from white nationalists.

Anyone traveling U.S. Highway 98 will realize that little has been done to recover and rebuild from Michael. In fact, Highway 98 is still closed in Mexico Beach, which was obliterated by the Cat 5 storm. The only billboards on the highway are those erected on behalf of out-of-town shyster lawyers eager to make a killing off hurricane claims. Tyndall Air Force Base's hangars and other buildings remain blown out shells with base repair and rebuilding funds being funneled away by Donald Trump for the building of his ludicrous and wasteful wall on the U.S.-Mexican border.

Piecemeal repairs to homes and businesses indicate that FEMA recovery funds have not made their way to the coast and inland areas devastated by Michael. Ironically, the Panhandle is Trump Country, but, as with all con men, Trump's promises of aid have merely been a load of his infamous bullshit. It's hard to tell how much more time it will take for Panhandle residents to realize that they have been had. Maybe another year with blue tarp over the holes in their roofs will do it. Or the fact that few businesses, including major chain stores and fast food restaurants have decided to rebuild and reopen. The only businesses doing well on the Gulf coast are storage places for those who have abandoned their homes for other locations and dumpster companies busy hauling away debris. Piles of debris continue to litter the sides of the road, with the occasional sofa and refrigerator poking up from mountains of splintered wood, pulverized masonry, and jig-sawed dry wall.

After the devastation of Camille in 1969, President Nixon marshaled the Pentagon and Commerce Department to help in the recovery and rebuilding effort along the coast. The government helped institute the Saffir-Simpson scale to measure the intensity of future hurricanes to prevent a repeat of the deaths caused by Camille.

Under Donald Trump, the only Gulf property owners seeing improvements are those living in the coastal high-rise condos and in yacht marinas. Trump's local base of mostly old and retired white people fester in trailers or long-term stay motels. They should remember who caused their despair the next time Trump, with his boy Gaetz in tow, pops around for a hate fest "rally."

Welcome to the Retrograde South, much like the Old South but with most everyone, women of all races, African Americans, and white redneck retirees, all getting Trump's shaft.

Related Topic(s): Abortion; Democrats; Devastation; Girls; Governors; Law; Pregnancy; Rape; Republican; Retrograde; (more...) South; State; US Southern Voters; Women, Add Tags  (less...)
Add to My Group(s)
Go To Commenting
The views expressed herein are the sole responsibility of the author and do not necessarily reflect those of this website or its editors.