At present, Joseph Biden has 1183 pledged delegates and Bernie Sanders 871. That's a difference of 312. But there are 3979 delegates ultimately to be pledged, not counting the 771 Superdelegates if no one wins on the first ballot. That means there are 1940 delegates still to be allocated. So, with a current difference of only 312 delegates between the two main candidates, there are still almost 2000 to be allocated over the next 4 months.

Yet, the Establishment is getting itself all bent out of shape because Bernie Sanders is staying in the race. Sanders seemed liked the presumptive nominee early on, and then Biden got a couple of big breaks and pulled slightly ahead. But the game is now far, far from over.

Biden remains a pretty lame, uninspiring, and by some accounts "significantly challenged", Presidential candidate. Even his most vocal partisans are a bit shaky about his prospects. My niece (who supports Biden) recently said that he is "one gaffe from disaster." I think that pretty much sums up a lot of the thinking about him in general. As a candidate, he simply can't hold a candle to Sanders, and that striking distinction could very well become more and more obvious as time goes on. The sheer "vitality gap" between the two may gradually morph into an "elect-ability gap". This may very well be wishful thinking on my part... maybe not.

Yes, a lot can happen can happen in a few months. Biden changed the whole dynamics of the primaries within about 48 hours. But I think that not all that much time will have to pass before the pre-South Carolina reality sinks back in: Biden is not really a viable candidate. This is because it just happens to be the bona fide reality.

But Biden is the Establishment's current choice. So, either he or someone just as Republican-lite, will carry their torch to the end, chanting all the while that "Sanders isn't electable", despite the fact that Sanders is the one who has beaten Trump in 65 out of the last 70 polls (that's at least what is was about a week ago).

The Establishment is as powerful an adversary as anyone can have in politics, as they have amply demonstrated. But Sanders has pulled off more than a few "miracles" before. And true Democracy has always been in his favor.

How will it end? I honestly don't know. But there are bound to be a lot more twists, turns, upsets, recalculations and "who-ever-expected-thats!" before this is over.

Yes, oh just wait and see: an awful lot can happen, in a few months... 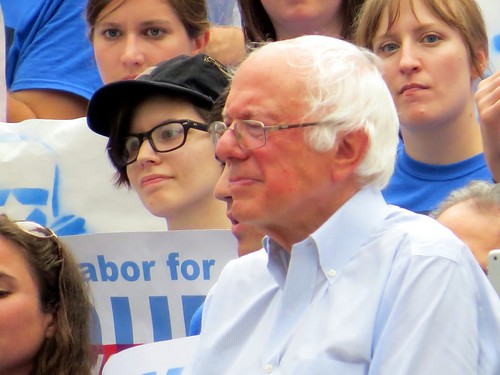 Will #BernieSanders run again in 2020?
(Image by kennethkonica)   Details   DMCA