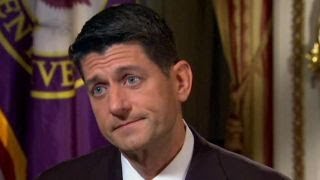 The Republican tax plan is a lie. It's being sold with the promise that the tax cut will create jobs and growth. In fact, the Republican tax cuts, if passed, will become the major obstacle to the very investments vital to generating good jobs and future economic growth.

Contrary to Donald Trump's claims, the rich and big corporations will pocket the vast bulk of the tax cuts, not working people. The tax cuts won't pay for themselves. They will increase the deficit. By 2027, one in four taxpayers will end up paying more. And for 80 percent of Americans, the tax cut they do get would be so small that it will go virtually unnoticed in most households. For example, the Tax Policy Center estimates that in 2027, the 27 million households with children and incomes under $75,000 will receive an average tax cut of all of $20 when the provisions are in full effect.

President Donald Trump argued that "our country and our economy cannot take off" without the tax cuts. Office of Management and Budget Director Mick Mulvaney, a true chickenhawk on deficits, now argues that the tax cuts are vital, even with greater deficits, because "we need to have the growth." Yet there is simply no reason to believe the tax cuts will generate greater growth or more jobs.

Historically, tax cuts haven't produced greater growth. The Reagan tax cuts are celebrated, but in fact the Reagan years produced a slower rate of growth than Jimmy Carter's term in office. And the tax cuts weren't nearly as important to the economic recovery in the 1980s as the Federal Reserve's cutting interest rates and Reagan's doubling the military budget in peacetime--a classic example of military Keynesianism.

Although George W. Bush cut taxes deeply and repeatedly in the early years of this century, growth collapsed in his administration. Real GDP rose well below its rate in the 1990s. In fact, after Clinton and Obama raised taxes, the economy grew faster than it did after Bush slashed them.

The idea that tax cuts will create jobs isn't borne out by evidence. Sara Anderson of the Institute for Policy Studies looked at 92 profitable large corporations that already pay at or less than the 20 percent rate promised in the Republican plan thanks to taking advantage of loopholes in the tax code. Those corporations have been laying off, not adding, workers over the past nine years. Corporate profits are at near-record levels, but companies are spending their money buying back stock, financing mergers, or issuing dividends, rather than investing in new jobs or products. A stunning 55 percent of corporate profits of the S&P 500 corporations have been devoted to stock buybacks, which raise the price of the remaining stocks and, not incidentally, boost the value of executive-suite stock options.

The rich will pocket most of the GOP tax cuts -- over one-half of the reductions will go to the wealthiest 1 percent, an average bonus of $129,000 in 2018. But inequality is already at record extremes, and even the conservative International Monetary Fund finds that extreme inequality is a drag on jobs and growth. The paltry tax break offered most Americans under the Republican plan might boost demand a smidgen, but, with consumer debt at record levels, most will simply go to pay down what is already owed.

Worse, the tax cuts -- totaling $2.4 trillion over the next 10 years -- will give away tax dollars that could be used to address our true investment deficit: the shortfall of public investments vital to our economy. Virtually absent in the public debate is the reality that the competitiveness of this economy is crippled by the starving of vital public investments.

The physical infrastructure that companies and families depend on -- roads, bridges, airports, water systems, broadband, electric grid, public schools, and more -- is dangerously decrepit. The American Society for Civil Engineers has documented the shortfall in our physical infrastructure, concluding that $2 trillion over 10 years will be needed simply to bring core infrastructure up to a reasonable standard. That does not begin to cover what's needed to create the resilience and transformations needed to deal with catastrophic climate changes.

Already, before Republicans have managed to further slash federal revenues, public investment in research and development -- vital to capturing the breakthrough inventions of the future -- is being cut by 17 percent in the Trump budget. America has prospered by leading the world in education. Now vital investment in education -- from pre-K to advanced training to college -- is falling behind our global competitors. Trump's budget would cut $143 billion from student loans over the next decade. It's obvious that burdening college graduates with debts, depriving workers of technical training, and having children go without the pre-K that helps prepare them for school will damage the country.

Yet Republican tax cuts essentially lock in a continuing public-investment deficit over the next decade. For today's reactionary Republican party, that is a feature, not a bug. The tax cuts won't produce jobs or growth, but they will generate more pressure for more cuts in public spending. And when that spending is cut, most Americans will find themselves losing ground to pay for the tax breaks that were pocketed by the already wealthy and the big corporations.

Democrats need to be louder champions of public investment. They are cautious because 61 percent of Americans, including 44 percent of Democrats and Democratic leaners, think Democrats "too often" see government as the only way to solve problems. The Wall Street wing of the party, with its embrace of austerity and neo-liberalism, is happy to feed that suspicion. Many politicians are reluctant to champion a cause that is compelling but controversial, but they shouldn't be.

Republican tax cuts will constitute a disgraceful giveaway to the wealthy and the entrenched corporate interests. Worse, they will squander tax dollars vital to the public investments essential to generating jobs and growth over the next years. They won't simply add to America's extreme inequality. They will sap our future prospects.

Related Topic(s): Corporations; Economy; Jobs; Republican; Taxes; Taxpayers, Add Tags
Add to My Group(s)
Go To Commenting
The views expressed herein are the sole responsibility of the author and do not necessarily reflect those of this website or its editors.