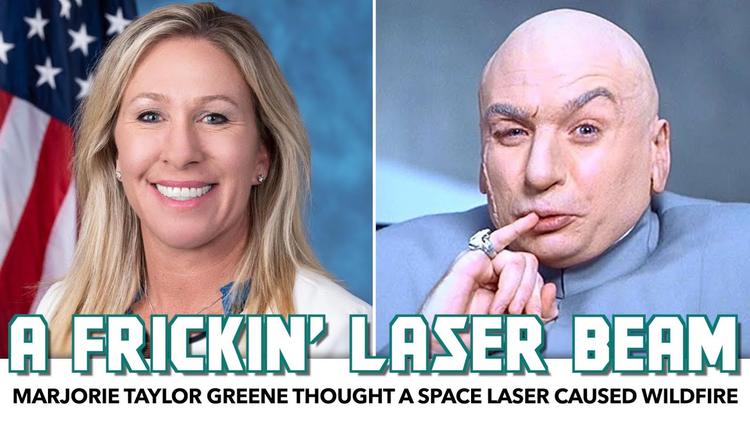 Golnaz Esfandiari reports on controversies currently roiling Tehran over the belief in supernatural beings, genies (jinn or djinn), among the country's ruling ayatollahs.

"There are enemies from among both genies and human beings, and they help oe another. The curity services of many countries work together against us...His website later interviewed a cleric, Ayatollah Ahmad Abedi, 'to clarify' the unsettling comments made by Iran's supreme leader.But Abedi, who was introduced as a professor at seminaries and universities, not only confirmed Khamenei's odd claim but even went a step further by accusing Israeli intelligence services of using sorcery."The Jews, in particular the Zionists, pursue metaphysical matters to a large extent. Their intelligence service, Mossad, undoubtedly does such things," Abedi was quoted as saying by Khamenei.ir."

You will say that the idea of powerful Jewish sorcerers deploying big blue genies (djinn or jinn) in the Israeli spy agency Mossad working to thwart Iran combines in itself the ultimate in both ignorant supersition and anti-Semitism (in this scenario, what couldn't be blamed on Jews?) You will say that the Republican Party is right to criticize Iran's Islamic Republic because the ayatollahs will never admit that their favored candidate did not win elections. And you will say that no prominent American politician would ever speak this way.

Eric Hananoki of Media Matters has discovered another of, you guessed it, Marjorie Taylor Greene's Facebook posts. Greene was endorsed for Congress by Trump and the Republican Party.

Remember she is kind of my boss, what with having been placed by Kevin McCarthy and the Republican leadership on the House Education Committee, which oversees funding for higher education.

She wrote that the 2018 California wildfires were caused not by utility company P&G's carelessness nor by the climate crisis, but by a P&G scheme funded by the Rothschild banking family to beam down solar energy from a space satellite, which missed its mark:

"If they are beaming the suns energy back to Earth, I'm sure they wouldn't ever miss a transmitter receiving station right??!! I mean mistakes are never made when anything new is invented. What would that look like anyway? A laser beam or light beam coming down to Earth I guess. Could that cause a fire? Hmmm, I don't know. I hope not! That wouldn't look so good for PG&E, Rothschild Inc, Solaren or Jerry Brown who sure does seem fond of PG&E."

P&G did toy with such a scheme, but it has never come to fruition, and the Rothschilds had nothing to do with it. A Jewish space laser.

Hananoki notes that during the 2020 campaign, "the National Republican Congressional Committee added her to its 'Young Guns' fundraising and recruitment program."

Young guns. House minority Republican leader Kevin McCarthy of Bakersfield, Ca., falsely said that she was given her committee assignments only after she renounced her crazy QAnon conspiracy theories, which she has not in fact done. McCarthy was being buddy buddy with Trump on Thursday in Florida, after he sent thousands of Greenes to invade the Capitol with an eye toward hanging Mike Pence.

Greene has also embraced the "substitution" theory that Jewish bankers and investors are arranging for mass Muslim immigration to Europe so as to replace troublesome white workers.

This "substitution" theory drove the gunman who killed 11 worshipers at the Tree of Life synagogue. Trump and his officials whipped up such fears by demonizing immigrants and Muslims.

Related Topic(s): California Fires; Greene-Marjorie; Immigrants; Qanon; Republican GOP Dirty Tricks; Republican Lies; Republican Pandering; Republican Traitors; Trump, Add Tags
Add to My Group(s)
Go To Commenting
The views expressed herein are the sole responsibility of the author and do not necessarily reflect those of this website or its editors.