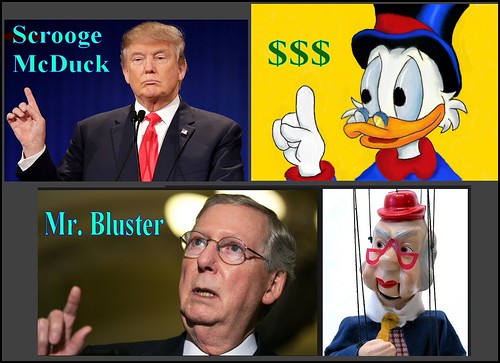 In much the same way that a broken clock is correct twice a day, so did our narcissist-in-chief (NIC) stumbled into a truism the other day when he described a "health-care" bill approved by the Republican-dominated House of Representatives as "mean."

Why did our clueless leader suddenly think a bill he had only recently pushed for and extravagantly celebrated at the White House was "mean"? Surely not because almost everyone who knew anything about it except for Tea Party Republicans thought it was mean. That's never bothered him before.

I suspect it had more to do with the fact that he needed the Senate, also run by Republicans, to also pass a health-care bill so he could brag about it again and he just happened to be in the room, sitting there like a broken clock, when someone said if there was any hope of getting a bill through the Senate it had to be different from the House bill, which was, as he subsequently repeated, "too mean."

Those are the kind of simple words the NIC understands. Big. Great. Best. Bad. Fat. Lousy, Mean. He likes to use them. A lot. Mean is not good. It's bad. People don't like mean things. How is the bill "mean"? Nuance is another matter.

Well, the bill that was presented to the Senate by a 13-member, all-white, all-male, Republican-only task force was apparently only a tad less mean than the GOP House bill, which means most of the country still thinks it's awful policy, as do a handful of Senate Republicans. Actually, a lot of Senate Republicans think it's not mean enough. In fact, not enough Republicans like it for Majority Leader Mitch McConnell to bring it to a vote that would carry, so he put it off to allow for arm-twisting and bribing.

As he apparently demonstrated at a ballyhooed arm-twisting meeting with all the Senate Republicans at the White House, the NIC doesn't know -- or even care -- how the bill works. He's apparently confused about the difference between Medicare and Medicaid, stuff like that. No matter. Mean or not, he just wants a health care bill passed so he can have another Rose Garden celebration and thumb his nose at Barack Obama. That's pretty much the entire Trump policy.

McConnell, for his part, resorted to his favorite weapon --- bribery --- to try to get 50 Republicans to buy in to the bill. That comes in the form of billions of dollars in local projects for Republican senators who might face difficult reelection if they vote for the still-mean health care bill.

Tell me that's not an awfully mean way to conduct public policy. And to no purpose other than to give tax cuts to the wealthiest Americans so they will continue to fund campaigns and vote for Republican candidates who promise to cut taxes even more, to eliminate pesky regulations that force businesses to be accountable for any harm they do, and to remove all those "deadbeats" Rush Limbaugh rails about from the Medicaid, food stamps, unemployment and welfare rolls.

In other words, Republicans have totally lost the concept of governing for the public good. They have been against everything for so long they don't know how -- or seem to even care to try -- to work with Democrats on creating useful legislation. I've been trying to figure out when "mean" became the Republican go-to word in policy. Maybe it was Ronald Reagan's phony trickle-down spiel. The middle class and poor are still waiting for the first nourishing drops. A lot of them -- many Trump supporters -- are those supposed "deadbeats" of Limbaugh's. Of course, they did have to suffer through a major economic disaster brought on by those rich individuals and corporations, who apparently didn't have enough stashed away from the tax breaks so they had to simply cheat people out of their money. And they got away with it.

By the way, Republicans just voted to do away with an Obama regulation that required people dealing with other people's money -- brokers -- to tell their clients what was in their best financial interests, not the brokers'. Bad idea, according to Republicans. Mean, I say.

Mean is slashing hundreds of millions from Medicaid, which pays for health care for 20 percent of Americans, including seniors in nursing homes, simply to cut taxes for those who don't need it -- the one percent. The very wealthiest Americans. Mean is cutting funding for Meals on Wheels and food stamps. Mean is promising coal workers that their dying industry will be revived while creating no jobs for them, but allowing coal companies to dump their waste into streams from which the workers get their drinking water. Mean is putting the Environmental Protection Agency, which protects Americans from such things as water pollution, under the direction of someone who wants to eliminate the agency.

Mean is looking to do away with hundreds of regulations that protect people from health and safety risks posed by unscrupulous cost-cutting minded corporations looking to improve their standing with shareholders. If Republicans want to take an object lesson about such short-sighted governing, they need only to look at the recent Grenfell Tower fire in London that killed 79 people.

The fire is believed to have been started by a faulty refrigerator and spread rapidly up the high-rise, fueled by a highly flammable exterior wrapping, called cladding, that is banned for use on high-rises in the United States, but which its maker is allowed to sell in places where regulations aren't as stringent. In the aftermath of the deadly blaze, Arconic -- formerly Alcoa -- said it would no longer sell the cladding, which has a polyethylene core, for high rise projects anywhere in the world. The company makes a more-expensive, fire-resistant cladding. Grenfell is a public housing project whose residents had complained for years that there were no fire alarms, no sprinklers, no safety tests and only one stairwell.

Since Republicans took control of the White House and both houses of Congress, they have eagerly worked to erase safety regulations issued late in the Obama administration, including rules to keep coal companies from dumping waste in streams and denying federal contracts to dangerous companies. And it's not just people who are the target of Republican callousness. The NIC recently signed a bill to allow the shooting of bears and wolves -- including cubs -- as they hibernate. Heartless. Mean.