House Republicans could have rejected the president's xenophobia. Instead, they went with it. 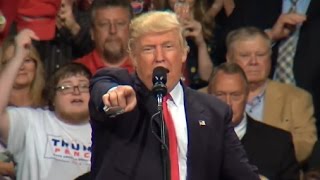 Donald Trump's assertion that four progressive Democratic congresswomen of color should "go back and help fix the totally broken and crime infested places from which they came" was racist and xenophobic. On Tuesday evening, the US House of Representatives rejected it as such, voting 240 to 187 for a resolution that "strongly condemns President Donald Trump's racist comments that have legitimized and increased fear and hatred of new Americans and people of color."

The condemnation of Trump should have been unanimous. And it was, on one side of the aisle. All 235 House Democrats voted for it. But just four Republicans (Will Hurd of Texas, Fred Upton of Michigan, Susan Brooks of Indiana, and Brian Fitzpatrick of Pennsylvania) joined in the condemnation, as did a former Republican who has left the party because of his objections to Trump and Trumpism, Justin Amash of Michigan.

The overwhelming majority of House Republicans, including the party's key House leaders and ranking committee members, formed the group of 187 that rejected appropriate and necessary criticism of the president. In so doing, they identified themselves and their party with Trump's racism and xenophobia. This was a choice -- a definitional choice. It delighted Trump, who tweeted: "So great to see how unified the Republican Party was on today's vote concerning statements I made about four Democrat Congresswomen."

The president, with his boundless self-absorption, had reason to be pleased. If and when historians point to the moment when "the party of Lincoln" formally degenerated into the party of Trump, and all that Trump stands for, they will be hard-pressed to find a better illustration than the night when 98 percent of House Republicans gave racism and xenophobia a pass.

Of course, that degeneration began long ago. This is the party that welcomed Strom Thurmond into its ranks in 1964. But this is also the party that nominated and elected a liberal African-American, Ed Brooke, as the senator from Massachusetts in 1966, that reelected Brooke and briefly considered him as a vice-presidential prospect. This is the party that, as recently as 2000, ran on a platform of "compassionate conservatism," and that after the 2012 election published an autopsy that declared that "the RNC cannot and will not write off any demographic or community or region of this country" and called on the party to "embrace and champion comprehensive immigration reform." Less than four years ago, South Carolina Senator Lindsey Graham ripped into Donald Trump as a disgusting "race-baiting, xenophobic, religious bigot." Graham said in 2015, "He doesn't represent my party." Now, Graham defends Trump's race-baiting xenophobia, as do the other leaders of the party.

Related Topic(s): History; Immigration; Party Loyalty; Republican Downfall; Republican Racism; Trump Against Democracy; Trump Ego; Trump Presidency, Add Tags
Add to My Group(s)
Go To Commenting
The views expressed herein are the sole responsibility of the author and do not necessarily reflect those of this website or its editors.