Click Here to Remove All Ads
Previously published at The Saker 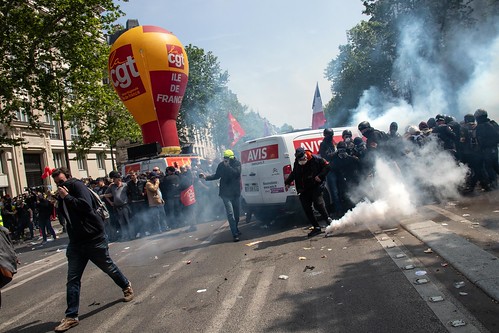 Yellow Vests at 1: Redeeming France's revolutionary spirit, but will another Napoleon squelch it?

For many years to come France will be divided into two periods - before the Yellow Vests, and after the Yellow Vests. It's widely believed in France that things can never go back to the way they were. I'm not sure there can be a better yardstick of domestic success - a better gauge of sociocultural impact - than that?

Outside of France the Yellow Vests have given the world a precious gift, and at a huge sacrifice: nobody will ever view: "French-style democracy" with the respect their government arrogantly demands as the alleged "birthplace of human rights". For a generation or longer: "What about the Yellow Vests?", will be a conversation-ending question to anyone who claims the moral superiority of the "Western-style" political system.

Systematic repression of the poorest classes is indeed "universal values", but only within neoliberal and neo-imperial systems. Make no mistake: It has been one year of open Yellow Vest revolt against the economic dictates of that "neoliberal empire", the European Union, and its neo-colonial puppet temporarily occupying Élyse'e Palace in Paris.

What the last year has testified to is the redemption of France's revolutionary spirit. Not every country has that, after all.

England, for example, will foolishly "keep calm and carry on" - a perfect summation of change-hating conservatism - until the bitter end, always. This is why reading English-language media coverage of the Yellow Vests was so very similar - "English conservativism opposes the egalitarian movement in France". They have been running the same story for 200+ years, going back to Edmund Burke, who founded modern Western conservatism with his (reactionary) Reflections on the Revolution in France in 1790.

France is not England, but 53 weeks ago I don't think anyone imagined that the French could possibly muster the stamina, dedication and self-sacrifice to protest amid massive state-sponsored repression every weekend for one year.

It's an amazing achievement, and only those full of spite and hate could deny them a modest present of honest recognition on their birthday. But Western mainstream media coverage in English and France was just that - they claimed the Yellow Vests achieved nothing.

One thing the French don't like to be reminded of is that the French Revolution failed, and quickly. It's as if they forget Emperor Napoleon?

But the French Revolution occurred in an era of constant regional imperialism, war, slavery, repression of women, religious and ethnic sectarianism, etc. - we would be wrong to say it did not still have positive worldwide ramifications in the most important realms of politics, economics, culture, etc. The USSR - the only empire based on affirmative action - also failed, but we would be wrong to say it didn't also produce positive changes for their people and also worldwide.

Quickly, here are a few tangible victories of the Yellow Vests: they prevented Emmanuel Macron from presenting a 10th consecutive annual austerity budget, they prevented Macron from de-nationalizing the three airports of Paris, and the 10 billion euros in so-called "concessions" was credited with keeping French economic growth in the positive in the last quarter.

However, even if the Yellow Vests have obviously not yet toppled the 5th Republic and set up a new order, their cultural is inestimable. Just as the Occupy Movement of the US in 2011 gave us the slogan and mentality of "We are the 99%", so will the Yellow Vests stand for something equally conscience-raising.

The Yellow Vests want a French Cultural Revolution, and should lead it

Related Topic(s): France; Police; Yellow Vests; Yellow Vests, Add Tags
Add to My Group(s)
Go To Commenting
The views expressed herein are the sole responsibility of the author and do not necessarily reflect those of this website or its editors.