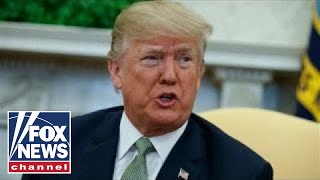 The real worry is that -- with Robert Mueller breathing down his neck, and several special elections suggesting a giant "blue wave" in November -- Trump is getting ready to do whatever it takes to win, even if that requires fanatical policy.

Trump's presidency has been, first and foremost, about marketing Trump. It's what Trump has done for his entire adult life. He doesn't know how to do anything else, nor is he interested.

Now that he's being pushed into a corner, he's reorganizing his team for an epic marketing battle. This requires purging naysayers from his Cabinet and White House staff because naysayers are terrible at marketing, and replacing them with tried-and-true salespeople, like Bolton and Kudlow.

Fox News -- Trump's propaganda arm -- is being reorganized for the same battle.

Fox News has been engaged in a parallel purge -- removing Trump critics like George Will, Megyn Kelly, and Rich Lowry, and installing Trump marketers like Laura Ingraham, Mark Levin, and Sebastian Gorka.

Trump and Fox News are pushing exactly the same story line -- both, to boost ratings.

The new twist to the story -- requiring the recent purges and a united front -- is that these forces are conspiring with the FBI to oust Trump from the presidency.

The membrane separating Trump's brain from Fox News has always been thin, but in the battle to come it will disappear entirely.

We all know Trump watches an inordinate amount of Fox News -- beginning in the wee hours with "Fox and Friends," which provides much of the fodder for his morning tweets.

Last Friday, soon after a "Fox and Friends" anchor attacked the spending bill as a "swamp budget," Trump tweeted he was "considering" vetoing it.

In January, after Trump agreed with "Nancy and Chuck" to grant legal status to so-called Dreamers brought to this country illegally as children, Fox host Sean Hannity told Trump in a phone call -- and then repeated on his show -- that he needed to be tougher.

Almost immediately, Trump came up with a list of conditions that thwarted the deal. Hannity's advice wasn't about policy; it was about marketing. Trump had to be tougher on Dreamers in order to reinforce his image as a strongman standing up for America against the liberal plot.

Related Topic(s): FOX NEWS; Propaganda; Trump Apologists; Trump Insults; Trump Tv, Add Tags
Add to My Group(s)
Go To Commenting
The views expressed herein are the sole responsibility of the author and do not necessarily reflect those of this website or its editors.