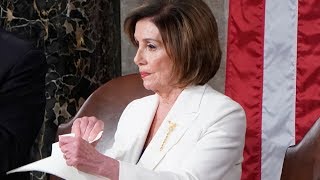 I wasn't going to comment on Trump's lie-filled State of the Union message but the whoppers were so big -- especially on the economy -- that I feel compelled. Here, for the record, is the real state of the union:

1. JOBS: Average monthly job creation dropped from 223,000 in 2018 to 176,000 in 2019. The employment rate for working-age adults has increased less than during the Obama recovery, and is still significantly below that of other developed countries. The pace of job creation is also markedly slower than it was under Obama.

2. WAGES: Wage growth has slowed, except in states with minimum-wage increases. The typical American household remains poorer today than it was before the financial crisis began in 2007. The median wage of a full-time male worker (and those with full-time jobs are the lucky ones) is still more than 3% below what it was 40 years ago.

3. TAXES: The Trump-Republican tax cut has been a huge failure. We were promised an increase in business investment, but business investment has contracted for the third straight quarter -- the first time this has happened since the Great Recession in 2009. Instead, the tax cut triggered an all-time record binge of share buybacks -- some $800 billion in 2018.

If fully implemented, the 2017 tax cut will result in tax increases for most households in the bottom 80 percent.

And it has resulted in record peacetime deficits (almost $1 trillion in fiscal 2019) in a country supposedly near full employment. Even with weak investment, the US had to borrow massively abroad: the most recent data show foreign borrowing at nearly $500 billion a year, with an increase of more than 10% in America's net indebtedness position in one year alone.

Nothing has trickled down to average workers. To the contrary, If fully implemented the 2017 tax cut will result in tax increases for most households in the bottom 80 percent.

4. TRADE: The 2018 goods deficit was the largest on record. Even the deficit in trade with China was up almost a quarter from 2016.

5 GROWTH: Last quarter's growth was just 2.1%, far less than the 4%, 5%, or even 6% Trump promised to deliver, and even less than the 2.4% average of Obama's second term. That is a remarkably poor performance considering the stimulus provided by the $1 trillion deficit and ultra-low interest rates.

6. WORKERS' RIGHTS: Trump administration has systematically weakened workers' rights. More than eight million workers will be left behind by the Trump overtime rule. Workers would receive $1.4 billion less than under the 2016 rule. New Trump administration joint-employer rule has $1 billion price tag for workers.

7. HEALTH: Millions of Americans have lost their health coverage, and the uninsured rate has risen, in just two years, from 10.9% to 13.7%. US life expectancy, already relatively low, fell in each of the first two years of Trump's presidency, and in 2017, midlife mortality reached its highest rate since World War II.

8. CLIMATE: losses related to climate change have already reached new highs in the US, which has suffered more property damage than any other country -- reaching some 1.5% of GDP in 2017.

Related Topic(s): Donald Trump Lies; Health; Jobs; Reality; Rights; State Of The Union Speech; Workers, Add Tags
Add to My Group(s)
Go To Commenting
The views expressed herein are the sole responsibility of the author and do not necessarily reflect those of this website or its editors.