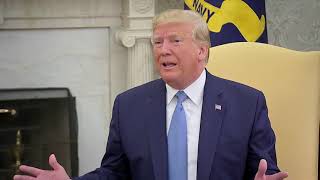 WIPED OUT: President Trump Warns He Can Wipe Out Afghanistan If He Wanted To
(Image by YouTube, Channel: FOX 10 Phoenix)   Details   DMCA

The trove of U.S. "Lessons Learned" documents on Afghanistan published by the Washington Post portrays, in excruciating detail, the anatomy of a failed policy, scandalously hidden from the public for 18 years. The "Lessons Learned" papers, however, are based on the premise that the U.S. and its allies will keep intervening militarily in other countries, and that they must therefore learn the lessons of Afghanistan to avoid making the same mistakes in future military occupations.

This premise misses the obvious lesson that Washington insiders refuse to learn: the underlying fault is not in how the U.S. tries and fails to reconstruct societies destroyed by its "regime changes," but in the fundamental illegitimacy of regime change itself. As former Nuremberg prosecutor Ben Ferencz told NPR just eight days after 9/11, "It is never a legitimate response to punish people who are not responsible for the wrong done. If you simply retaliate en masse by bombing Afghanistan, let us say, or the Taliban, you will kill many people who don't approve of what has happened."

The "Lessons Learned" documents reveal the persistent efforts of three administrations to hide their colossal failures behind a wall of propaganda in order to avoid admitting defeat and to keep "muddling along," as General McChrystal has described it. In Afghanistan, muddling along has meant dropping over 80,000 bombs and missiles, nearly all on people who had nothing to do with the crimes of September 11th, exactly as Ben Ferencz predicted.

How many people have been killed in Afghanistan is contested and essentially unknown. The UN has published minimum confirmed numbers of civilians killed since 2007, but as Fiona Frazer, the UN human rights chief in Kabul, admitted to the BBC in August 2019, "more civilians are killed or injured in Afghanistan due to armed conflict than anywhere else on Earth" (but) due to rigorous methods of verification, the published figures almost certainly do not reflect the true scale of harm." The UN only counts civilian deaths in incidents where it has completed human rights investigations, and it has little or no access to the remote Taliban-held areas where most U.S. air strikes and "kill or capture" raids take place. So, as Fiona Frazer suggested, the UN's published figures can be only a fraction of the true numbers of people killed.

It shouldn't take 18 years for U.S. officials to publicly admit that there is no military solution to a murderous and unwinnable war for which the U.S. is politically and legally responsible. But the debacle in Afghanistan is only one case in a fundamentally flawed U.S. policy with worldwide consequences. New quasi-governments installed by U.S. "regime changes" in country after country have proven more corrupt, less legitimate and less able to control their nation's territory than the ones the U.S. has destroyed, leaving their people mired in endless violence and chaos that no form of continued U.S. occupation can repair.

"Regime change" is a process of coercion designed to impose the political will of the U.S. government on countries around the world, violating their sovereignty and self-determination with an arsenal of military, economic and political weapons:

1. Delegitimization. The first step in targeting a country for regime change is to delegitimize its existing government in the eyes of U.S. and allied publics, with targeted propaganda or "information warfare" to demonize its president or prime minister. Painting foreign leaders as villains in a personalized Manichean drama psychologically prepares the American public for U.S. coercion to remove them from power. One lesson for those of us opposed to regime change operations is that we must challenge these campaigns at this first stage if we want to prevent their escalation. For example, Russia and China today both have strong defenses, including nuclear weapons, making a U.S. war with either of them predictably catastrophic, or even suicidal. So why is the U.S. stoking a new Cold War against them? Is the military-industrial complex threatening us with extinction only to justify record military budgets? Why is serious diplomacy to negotiate peaceful coexistence and disarmament "off the table," when it should be an existential priority?

2. Sanctions. Using economic sanctions as a tool to force political change in other countries is deadly and illegal. Sanctions kill people by denying them food, medicine and other basic necessities. UN sanctions killed hundreds of thousands of Iraqis in the 1990s. Today, unilateral U.S. sanctions are killing tens of thousands in Iran and Venezuela. This is illegal under international law, and has been vigorously condemned by UN special rapporteurs. Professor Robert Pape's research shows that economic sanctions have only achieved political change in 4% of cases. So their main purpose in U.S. policy is to fuel deadly economic and humanitarian crises that can then serve as pretexts for other forms of U.S. intervention.

3. Coups and proxy wars. Coups and proxy wars have long been the weapons of choice when U.S. officials want to overthrow foreign governments. Recent U.S.-backed coups in Honduras, Ukraine and now Bolivia have removed elected governments and installed right-wing U.S.-backed regimes. The U.S. has relied more heavily on coups and proxy wars in the wake of its military disasters in Korea, Vietnam, and now Afghanistan and Iraq, to attempt regime change without the political liability of heavy U.S. military casualties. Under Obama's doctrine of covert and proxy war, the U.S. worked with Qatari ground forces in Libya, Al Qaeda-linked groups in Syria and militaryleaders in Honduras. But outsourcing regime change to local coup leaders and proxy forces adds even more uncertainty to the outcome, making proxy wars like the one in Syria predictably bloody, chaotic and intractable.

Related Topic(s): Afghanistan War; CODEPINK; Military; Regime Change; Survival, Add Tags
Add to My Group(s)
Go To Commenting
The views expressed herein are the sole responsibility of the author and do not necessarily reflect those of this website or its editors.