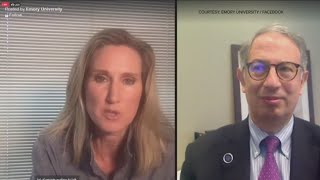 Infectious diseases expert Dr. Emory said on COVID-19: .We need to do a close down of the country..
(Image by YouTube, Channel: 11Alive)   Details   DMCA

What do we make of it all? I just read an article in the New York Times that reports that President Trump lied and hid from the public the severity of the Covid-19 pandemic. On the other side, I encounter endless Internet rage that Covid-19 is a hoax, that New York city's hospitals are empty and no one has died. It is nothing but a Rothchild-Rockefeller-Bill Gates plot. Perhaps the most stunningly inconsistent claim of all is that it is a bio-weapon that is so harmless that there should have been no lock-down. Why make a harmless bio-weapon?

Where one stands on the close-down depends on where one stands on other issues. If you are a libertarian, you oppose the close-down because it interferes with your freedom and keeps useless old people alive who cost you payroll tax dollars. It you are a Trump-hater like the New York Times you blame Trump for understating the threat and not closing down soon enough. If you are a Trump supporter you blame China and expect China to pay for it by forfeiting their trillion dollar holding of US government bonds.

Those decrying the close-down are unaware of the mischief they are making. They have set it up for the elites, who have taken us for another "bailout the one percent ride," to blame the resulting economic depression on the close-down. The US economy has been in a long-term recession. Growth in income and wealth has accrued to the top few percent who own the majority of stocks and bonds driven up in price by the Fed's money printing. The rest of the population has been hurt by the offshoring of their jobs and by the financialization of the economy that leaves them little or no discretionary income after they pay their rent or mortgage, car payment, credit card payment and student debt.

The economy was already in a debt deflation with 40% of the population unable to raise $400 cash according to the Federal Reserve. The inevitable consequence of a debt deflation is economic depression as debt deflation precludes sufficient consumer aggregate demand to drive the economy. GDP growth has received no help from business investment, because corporations have used their profits to buy back their own shares.

The close-down is not responsible for the debt deflation, the foundations of which were already in place. But the close-down has given it a push. Small businesses were not bailed out like larger ones such as Boeing. For small businesses the close-down represents a period when their costs exceed their revenues. For the unemployed that resulted from the close-down, their living expenses continued but their pay checks did not. The Trump checks help as do temporary moratoriums on evictions to delay the inevitable, but for the majority of the already heavily indebted, the close-down adds to their debt.

Michael Hudson and I believe that an economic system that enriches the renter class by converting as much of personal income as possible to the service of debt is an economic system that is dead in the water. One possible way out is a debt write-down in order to create some discretionary income. Keep in mind that when the replacement of offshored manufacturing jobs with Walmart jobs stopped US GDP growth, Federal Reserve Chairman Alan Greenspan substituted growth in consumer debt for the missing income growth, and by this substitution created discretionary income by loading up the consumer with debt.

That load is now full. We are in the unenviable position of having very high stock prices in an economy that has no growth potential. The high stock prices are the product of trillions of dollars injected into financial asset prices. If the reopening spreads the virus and produces a second wave that overwhelms the health care system on a broader basis, the economy could be shutdown again, or if kept open could be disrupted by widespread illness or reluctance to accept exposure to the virus. On the other hand, if the virus has run its course, or the threat was exaggerated, the existing stifling debt burden remains.

The danger in the shouting and finger-pointing is that a sick economy will be blamed on the close-down, not on the debt burden. Reopening the economy does not make the debt burden disappear. Michael Hudson and I have tried to focus the public and policymakers on the real problem. So far we have been unsuccessful.

Related Topic(s): Bailout; Blame; China; Economic Rights; Economic Shutdown; Government; Shutdown; Unemployed, Add Tags
Add to My Group(s)
Go To Commenting
The views expressed herein are the sole responsibility of the author and do not necessarily reflect those of this website or its editors.