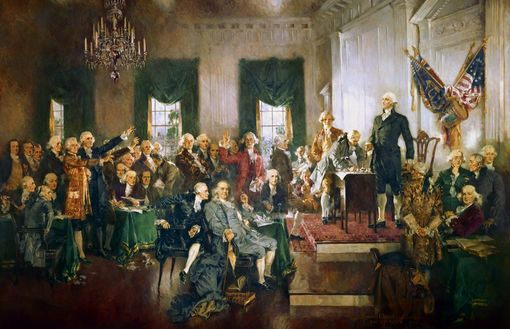 It has been amusing to hear liberal commentators say over and over that the malignant racist rogue president Donald "I am the World's Greatest Person" Trump is precisely the sort of terrible tyrant the United States Founding Fathers had in mind when they devised their "genius" Constitutional system of "checks and balances." The Tiny-fingered, Tangerine-Tinted, Twitter-Tantruming Tyrant Trump (hereafter "T7") owes his ascendancy to the White House and his continued presence there largely to the U.S. Constitution.

Ballot-marked by roughly a quarter of eligible U.S. voters in 2016, the venal aspiring fascist strongman T7 remains too transparently terrible a human being to win support from most U.S.-American voters. But so what? The hallowed 1787 parchment's Electoral College system permits someone to ascend to the White House without winning a majority in the national popular presidential vote. Majority support is not required under the constitutionally prescribed U.S. electoral system. A President Elect does not have to win most of the votes from the very modest majority (just 55% in 2016) of the U.S. electorate that bothers to participate in the nation's money- marinated presidential elections. The Constitution's absurd, democracy-flunking Electoral College significantly inflates the "democratic" electoral voice of the nation's most reactionary, white, racist, rural, and "red" (Republican) states by rendering popular vote totals irrelevant in more urban, racially diverse, high population, and reliably "blue" (Democratic) states. It grants slightly populated "red" states a disproportionately high number of collegiate Electors.

It is openly ridiculous, from a democratic, one-person-one vote perspective.

(Incidentally, Puerto Rico is a preponderantly Latinx U.S. territory that is home to more than three million people who pay U.S. [payroll, business, and estate] taxes but have no Electoral College votes even as they help fund the U.S. government [The same is true for other U.S. territories]. It has a bigger population than do seventeen U.S. states, all of whom have at least three presidential Electors and four of which [Arkansas, Kansas, Mississippi, and Nevada] have six Electors. The combined total population of the nation's four least populous states [Wyoming, Vermont, Alaska, and North Dakota] is less than that of Puerto Rico alone. Those very predominantly white four states together have twelve presidential Electors.)

A different way in which T7 (the tiny-fingered, tangerine-tinted, Twitter-tantruming tyrant Trump) owes his 2016 victory to the Constitution is less obvious. As has been documented at length, T7 was elected largely because the neoliberal-corporate-globalist Obama-Clinton Democrats demobilized the nation's all-too silent progressive majority. The dismal-dollar-drenched Democratic Party, the nation's perennial Inauthentic Opposition and Fake Resistance, is vote-depressingly awful thanks in great part to the distorting role big-money campaign contributions play in determining the outcomes of the nation's ever more preposterously expensive elections.

And that role is attributable in no small measure to the holy Constitution. The Founders created the Supreme Court as a critical, presidentially appointed-for-life check on the popular will. And in two landmark decisions, Buckley v. Valeo (1976) and Citizens United (2010), the high court has ruled (in total violation of majority public opinion) that private campaign contributions are "free speech" and that there are no limits to be legally set on how much the rich and powerful can invest in the giant organized bribery project that is U.S. campaign finance.

With full Supreme Court approval, the American money-politics system subjects U.S. candidates to what current US Congressman Jamin Raskin (D-MD) once accurately described as "the wealth primary," the requirement that one either possess vast personal wealth or access to others' vast personal wealth in order to make viable runs for elective office. T7 rode the money-politics "wealth primary" to power indirectly, through election investors' demobilizing impact on the Democratic vote, and directly, through Trump's self-financing (decisive in the primaries along with massive free media promotion) and campaign backing from right-wing moguls like Robert Mercer and Sheldon Adelson (critical to T7's success in the general election).

Equally if not more horrendous is the Constitution's role in preventing T7's properly rapid removal. T7 announced its wretched unsuitability for the office to which it had arisen on its very first day in power. That's when it gave a mind-bogglingly moronic, delusional, and disjointed "speech" at the CIA's headquarters. It blustered that "we should have kept [Iraq's] oil" and that "maybe you'll have another chance" (to get "the oil"). The dementia-addled low-lights included passages like these:

"I know a lot about West Point...Every time I say I had an uncle who was a great math professor at MIT...who did a fantastic job ...and then they say, Is Donald Trump an intellectual? Trust me, I'm like a smart person...You know, when I was young. Of course I feel young I feel like I was 30, 35...39...Somebody said are you young? I said I think I'm young...I remember hearing from one of my instructors, the United States has never lost a war. And then, after that, it's like we haven't won anything. You know the old expression, to the victory belongs the spoils? You remember I always say keep the oil....we should have kept the oil....But okay, maybe you'll have another chance ....as you know I have a running war with the media, they are among the most dishonest human beings on earth..."

"In the seconds after [T7's CIA monologue] finished," Michael Wolff has recounted, "you could hear a pin drop." The rest, as the saying goes, is history: think Charlottesville, "shithole nations," concentration camps, the fake national emergency, the Nativist Wall, the criminal diversion of taxpayer funds, "go back to the crime-ridden countries you came from," Kavanaugh, reckless environmental deregulation, the abrogation of asylum rights, record-setting drone war, "fire and fury," "I might end birthright citizenship," threats of "tough guy" violence if Congress or voters try to remove him from office, disfigured weather maps, the torture of Puerto Rico, covering for Saudi Arabia's dismemberment of a dissident journalist, the torture of Yemen, 10,000 false statements, Alabama Hurricane threat, "no obstruction," "the Blacks love me," "my perfect phone call," "the Kurds are very happy," "this phony emoluments clause..."

The maddening list of T7's offenses goes on and on and on. An activist Website gives the following daunting list of offenses for which the aspiring fascist strongman deserves impeachment: Violation of Constitution on Domestic Emoluments; Violation of Constitution on Foreign Emoluments; Incitement of Violence; Interference With Voting Rights; Discrimination Based On Religion; Illegal War; Illegal Threat of Nuclear War; Abuse of Pardon Power; Obstruction of Justice;Politicizing Prosecutions;Failure to Reasonably Prepare for or Respond to Hurricanes Harvey and Maria; Separating Children and Infants from Families;Illegally Attempting to Influence an ElectionTax Fraud and Public Misrepresentation; Assaulting Freedom of the Press; Supporting a Coup in Venezuela; Unconstitutional Declaration of Emergency; Instructing Border Patrol to Violate the Law; Refusal to Comply With Subpoenas; Declaration of Emergency Without Basis In Order to Violate the Will of Congress;Illegal Proliferation of Nuclear Technology; Illegally Removing the United States from the Intermediate-Range Nuclear Forces Treaty.

I would add one: the criminal acceleration of Ecocide, the biggest issue of our or any time. Trump has brazenly violated his oath to serve the General Welfare by doing everything he can to turn the world into a giant Greenhouse Gas Chamber as soon as possible. (Where Burisma-Biden-Gate ranks on this list is a matter of ideologically mediated interpretation.) Meanwhile, T7's dreadful and Huxwellian woman-child adviser Kellyanne Conway tells us that it "needs to tweet like the rest of us need to eat."

But right on Day One, with T7's insane, rambling CIA oration, it should have been clear as day that Malignant Orange was mentally (as well as morally) unfit for the demanding position to which it had been so absurdly yet constitutionally elevated. The "Stable Genius" is, among other terrible things, an abject dotard. An immediate Vote of No Confidence should have been immediately held in Congress, mandating the calling of a new national presidential election as soon as possible.

But, of course, no such common-sensical parliamentary procedure is permitted under the U.S. Constitution, which mandates absurdly time-staggered and strictly scheduled presidential elections just once every four years. That's the ridiculously brief and spaced-out window when the corporate-managed citizenry gets it absurdly filtered (Electorally Collegialized) "input" on who sits in the nation's most powerful job (the world's most powerful job after 1945): two minutes once every 1,460 days.

Paul Street (www.paulstreet.org and paulstreet99@yahoo.com) is the author of Empire and Inequality: America and the World Since 9/11 (2004), Racial Oppression in the Global Metropolis (2007), Barack Obama and the Future of American Politics (more...)
Related Topic(s): Constitution In Crisis; Constitutional Issues; Democracy; Impeachment; Trump; Voting, Add Tags
Add to My Group(s)
Go To Commenting
The views expressed herein are the sole responsibility of the author and do not necessarily reflect those of this website or its editors.