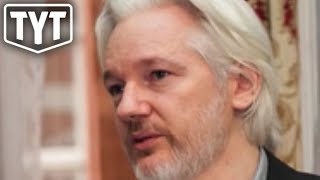 What Is The Future Of Net Neutrality? Julian Assange has been arrested.
(Image by YouTube, Channel: The Young Turks)   Details   DMCA

The Justice Department said Thursday that it was charging Julian Assange with one felony count of conspiring to hack into a computer. In the greater scheme of things, that's a nonsensical charge. There are probably 10,000 fat, lonely guys, living in their parents' basements who the government could charge with that crime on any given day.

Assange's attorneys in the UK say the extradition process might last five years because it will likely end up in the European Court of Justice. If true, conceivably Assange could be detained for five years awaiting extradition, or roughly the same amount of time he might be sentenced to if convicted on the computer hacking charge.

Justice Department policy defines time in detention under almost any circumstance as time served. So if there ever were a trial in the US for the computer hacking charge it would likely be nothing more than a show trial.

Additional charges after the application for extradition has been filed are unlikely, due to limitations in extradition treaties requiring full disclosure of all charges prior to an extradition being considered. But that's not the issue here.

No matter what happens, no matter what the charges, Julian cannot and will not get a fair trial in the Eastern District of Virginia.

The Eastern District of Virginia is known as the "Espionage Court" for a reason. No national security defendant has ever won a case there. Never. And Judge Leonie Brinkema reserves all national security cases for herself. She has Julian's case, she judged my case, as well as the case of CIA whistleblower Jeffrey Sterling, and we know that she has also reserved what will be the Ed Snowden case for herself.

At the risk of sounding like a broken record, I'll tell you about what I went through in Judge Brinkema's courtroom. None of it was good. And Julian should expect exactly the same.

When I was arrested after blowing the whistle on the CIA's torture program, I was charged with five felonies -- three counts of espionage, one count of violating the Intelligence Identities Protection Act of 1981, and one count of making a false statement. Of course, I hadn't committed espionage, nor had I made any false statement. (I'm still not exactly sure what the false statement was supposed to have been.) But those charges were used as leverage to eventually force me to take a plea. When I said that I wasn't interested in a plea and that I wanted to go to trial, the prosecutors threatened to add a second false statements charge and a charge of obstruction of justice -- two throwaway felonies that could be used as additional leverage. I told them to bring it on, but they never did add those charges.

The government will invoke something in Julian's case called CIPA -- the Classified Information Protection Act. That means that the court must do everything possible to "protect" classified information from being revealed, even to the jury. The first thing that's done in a CIPA trial is that the courtroom is sealed. The only people allowed inside are the defendant and the defendant's attorneys, the prosecutors, the bailiff, the clerk, and the judge. The jury also would be there in the event of a jury trial, but it gets a little more complicated in that case. The bailiff will lock the courtroom doors and put tape around them, and he'll cover the windows with plastic or canvas, all so that nobody outside can hear anything.

If there's a jury trial, the judge will insist that "classified" words or phrases not be uttered, but instead must be replaced by unclassified words. For example, "Did you hack into NSA's computers and download documents from Operation Widget?" becomes "Did you hack into Castle's computers and download documents from Operation Pilates?" It sounds ridiculous, doesn't it? Well, it is ridiculous. More importantly, it's very confusing for jurors, many of whom may conclude, "Wow, there are so many classified words that are being discussed! He must be guilty!"

Julian's attorneys also will make a number of motions, both for discovery and for the declassification of documents necessary for his defense. Judge Brinkema is unlikely to approve any of them. Again, in my case, my attorneys made 70 motions to declassify 70 separate classified documents necessary for my defense. We blocked off two full days for the hearings, as did the prosecutors. But when we got to the courtroom, Judge Brinkema began by saying, "I'm going to make this easy for everyone. I'm going to deny all 70 of these motions." Her thinking was that I either did it (committed a crime) or I didn't. There was no reason to "jeopardize national security" if she was going to eventually convict me anyway. So my attorneys had literally nothing to present in my defense.

We didn't roll over, of course. My attorneys objected and were overruled. The prosecution then asked for an in-camera conversation with the judge. That's a private conversation between the judge and the prosecutors without my attorneys present. My attorneys objected strenuously. The judge overruled them again and she went into chambers with prosecutors. As crazily unconstitutional as this may sound, it is permitted in a national security case. To this day I have no idea what was said in that room. But when she came out, the judge looked at my attorneys and reiterated her decision to overrule the objection. And then, much to my shock, she looked at me and said, "This case better not go to trial." The hearing ended. It had begun only 15 minutes earlier.

As we walked out of the courtroom, I asked my attorneys, "What just happened in there?" "We just lost the case," was the response. "What do we do now?" I asked. "Now we take a plea." A week later I changed my plea to "guilty." The government had come down from an offer of 10 years to one of two-and-a-half. I would do 23 months. My attorneys thought that if I had gone to trial, I would have lost and I would have realistically gotten 12-18 years. I had no choice.

At sentencing, the judge said that she was glad the case hadn't gone to trial. She didn't want "more classified information out there in the public domain." But then she said, "I don't like this deal. I don't like it at all. If I could, Mr. Kiriakou, I would give you 10 years. But my hands are tied." I left for federal prison six weeks later.

Related Topic(s): Charged; Extradition; Freedoms; Julian Assange; Whistleblower, Add Tags
Add to My Group(s)
Go To Commenting
The views expressed herein are the sole responsibility of the author and do not necessarily reflect those of this website or its editors.