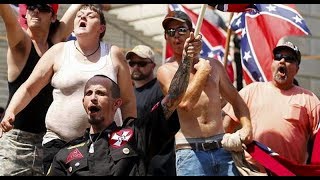 Liberals have been understandably aghast at Donald Trump's recurrent claim that he doesn't "have a racist bone in [his] body." Who is the white-nationalist president trying to kid? His politics and presidency have consistently been monuments to white racial identity, animated by a promise to white voters that black and brown people will be put "back in their place(s)."

A fierce "us and them" politics of unashamed whiteness, replete with the embrace of policies that discriminate against people of color, has been the primary glue holding together the Trump coalition from day one. The accurate translation of Trump's slogan "Make America Great Again" is not so much "Make America White Again" as "Make Whites Supreme Again."

Trump is just the tip and leading beneficiary of the big white iceberg of Amerikaner racism -- denial. Ask a typical white Trump supporter if they or their clearly racist president is in any way racist and you will hear passionate denials on both counts combined with outrage that anyone would think to pose the questions in the first place.

This is the racism disavowal that matters most. Without it, the transparently racist Trump could never have ascended to the White House and have a real shot at a second term.

Whence this mass white disowning of white racism? Part of it has to do with self-image. Beyond white-supremacist circles, few white Americans want to think of themselves or their loved ones, friend, and neighbors as racists in a mass culture in which racism has been given a bad name since at least the middle 1960s.

A second factor is about self-interest. Many if not most of Trump's very disproportionately white backers know they risk alienating current and potential employers, customers, investors, listeners, viewers, voters and/or subscribers by openly embracing racist sentiments.

A third part of the equation is that many Republicans and Trumpers think they and their president are not saying or writing/tweeting/Facebooking racist things unless their statements include explicit and overt references to race and racial identity. However, much contemporary racism is cloaked in nominally race-neutral language, using technically non-racial phrases like "states' rights," "local control," "law and order," "personal responsibility," "inner city," "urban crime," "welfare dependents," "charge on taxpayers," "super-predators," "felons," "illegal immigrants," "undocumented people" and the like to confer deeply racialized meanings.

A fourth relevant factor is the widespread sense that racism is most fundamentally about interpersonal conduct and personal likes. This notion is false. Racism deeply and properly understood is about how social structures and institutions function to create outcomes that favor people of one race over and against people of other races. It's about how housing and financial markets, the criminal justice and school funding systems, and media and electoral structures operate to perpetuate racial disparity and oppression. So what if Trump is friendly with Kanye West and Tiger Woods (and Kim Jong Un and Mohammed bin Salman) or if Joe the Plumber plays pick-up basketball with black guys? So what if your white son quarterback has a favorite wide receiver who is black on the local high school football team? So what, by the way, if you and your kids admire certain black athletes, actors, singers and/or rappers? So what even if you voted for Obama, when you back the racist War on Drugs and the mass-incarcerationist War on Drugs? Many antebellum and Jim Crow-era Southern white slaveowners and plantation owners and managers were outwardly kind to their favorite chattel and hardly meant their affection for some blacks to suggest the South's regime of racial terrorism and exploitation should be overthrown.

By defining racism merely as a matter of how they (think they) treat nonwhite people in their daily lives (and how they embrace certain black public personalities), millions of whites get to give themselves an undeserved racial pass while backing politicians, policies and practices that consign millions of black and brown people to the bottom of the nation's stark inequality structures.

Fifth, there's the strange white trauma of the Obama years. In November of 2017, The Atlantic's Adam Serwer hit on something important when he credited Trump with sensing accurately that "Obama's time in office inflicted a profound psychological wound upon many white Americans, one that [Trump] could address by adopting a false narrative that placed the nation's first black president outside the bounds of American citizenship. [Trump] intuited," Serwer wrote, "that Obama's presence in the White House decreased the value of what W.E.B. DuBois described as the 'psychological wage' of whiteness across all classes of white Americans, and that the path to their hearts lay in invoking a bygone past when this affront had not taken place and could not take place." (emphasis added)

What was the affront? Serwer did not say, but he suggested the nub of the matter by invoking the great black Marxist DuBois. For DuBois, writing in the 1930s, one way the nation's white ruling class kept the majority white working-class population at least passively allegiant to the underlying system of class rule (capitalism) was through a form of mental and emotional divide-and-rule: even the lowliest white person was guaranteed a measure of status by being deemed superior to non-whites. By holding the nation's (and indeed the world's) top office for two full terms, Serwer intuited, the silver-tongued Harvard Law graduate Obama had rubbed millions of white Americans (of all classes) in the face with the fact that a person from the bottom of the nation's racial hierarchy had risen above them. This caused shame-and anger-inducing cognitive dissonance for millions of white voters, helping make them receptive to a 21st century white Redeemer like Donald Trump.

Sewer might have gone further. A fifth major factor behind white Trump voters' racism-denial is the combination of their false belief that blacks have pulled even or even ahead of whites economically with their equally incorrect notion that whites are now major victims of racial discrimination ("reverse racism") in the United States. The most recent comprehensive racial attitudes survey taken prior to the 2016 election by the Pew Research Center showed that less than half (47%) of white Americans understood the elementary fact that blacks were worse off financially (far worse off in that and other ways, in fact) than whites in the U.S.

These bogus white ideas, hardly new to the Obama and Trump years, have been developing across the long post-civil rights era. They are fed among other things by the dominant media-politics culture's bourgeois-identification obsession with the color of faces in high places and the parade of highly successful and affluent black sports and entertainment personalities along with black political stars, including above all the nation's 44th president, Barack Obama.

As a Chicago-based civil rights researcher and policy advocate in the early 2000s, I was deeply concerned that Obama's ascendency would have an ironically deadly impact on the struggle for black equality. I worried that an Obama presidency would spark precisely the DuBoisian white backlash ("white-lash") that Serwer later sensed and that the "deeply conservative" Obama's own victim-blaming neoliberal class-ism would merge with his fear of further triggering whites already traumatized by the simple elemental fact of his race to make him excessively unwilling to confront the nation's racial disparities.

Paul Street (www.paulstreet.org and paulstreet99@yahoo.com) is the author of Empire and Inequality: America and the World Since 9/11 (2004), Racial Oppression in the Global Metropolis (2007), Barack Obama and the Future of American Politics (more...)
Related Topic(s): Liberals; Obama; Orwellian; Politics; Racism; Racist Depopulation; Right Wing Evangelicals; Trump Bigotry; Trump Deporting Aliens; Trump Racism; (more...) Whiteness, Add Tags  (less...)
Add to My Group(s)
Go To Commenting
The views expressed herein are the sole responsibility of the author and do not necessarily reflect those of this website or its editors.