So will they apologize? Gimme a break! 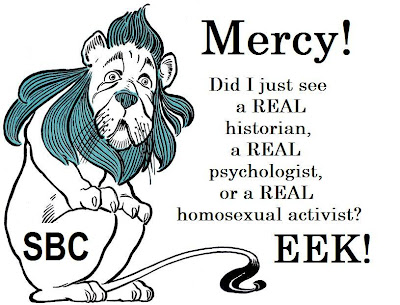 Four days ago, Anderson Cooper360 and CNN ran a series which focused on the tip of a proverbial iceberg: "The Sissy Boy Experiment" brought out the frustration and the compassion of America's psyche. It also brought out the hypocrisy of "reparative therapists" and their supporters in the Christian Right.

So why isn't anyone saying "we're sorry"?

Because the REAL "sissy boys" the ones so cowardly, so unmanly, if you will,  never apologize. Where some people see apology as a sign of strength/courage in admitting an error or sin, others look upon it as a weakness: e.g. why did it take the Southern Baptist Convention over 150 years to apologize for slavery? Why did it take the Catholic church 1700 years for a pope to cry at Jerusalem's Wailing Wall?

Over the last several days, we've viewed the ultimate in cowardice in George "rentboy" Rekers on CNN (The Sissy Boy Experiment): his reaction to news of the suicide of former patient Kirk Murphy was, at best, disingenuous, and his sloughing off of any responsibility was weak and unprofessional. And on the 15th, we'll witness the disdain of the Southern Baptist Convention in being asked to apologize for the persecution and suffering heaped upon the LGBTQ community.

I've already written on the Christian Right's refusal to admit its past errors (Christian Crime Line), but its more current misdeeds need further exploration: the establishment of ex-gay organizations and ministries, the support of Dominionist historians, pseudo-scientists and fear-mongering against any collective not within its small but powerful sphere threaten to undo the diversity for which our country is so celebrated.

It is as if the Christian Right has taken up shock talk host Michael Savage's call to battle: "Diversity Equals Perversity!" One can certainly see in Bryan Fischer's bombastic rants a lethal kind of homogenization (not assimilation) that will not only kill compassion for one another, but will surely lead to actual bloodshed. The last part of The Sissy Boy Experiment focused on Joseph Nicolosi and his group NARTH (National Association for Reparative Therapy of Homosexuals). CNN missed a particular salient point in its interview with Nicolosi: he is no longer a member of the American Psychological Association, since his ethics  and theories were discredited by fellow members. In fact, Nicolosi and professional anti-gay Paul Cameron look as if they are in a contest to see how many professional organizations they can be expelled from!

Besides sponsoring reparative therapy and ex-gay organizations, the Southern Baptist roots to LGBT oppression go back to the first decades of the AIDS crisis: many people were summarily kicked out of their homes while they were sick and dying. The situation, after all, called for righteousness and Southern Baptists wanted the world to know that they were the most righteous group of all. This show of righteousness came after President Bailey Smith's infamous statement "God Almighty does not hear the prayers of a Jew" and the dictum that women must still be subservient to their husbands.*

One might posit the idea that they will never apologize, so why should we be concerned? The problem, as some see it, is that our recent religious-political system has been getting away with saying and doing anything it pleases. It never monitors itself: if, for example, Jones had not gotten the attention of the whole world, we would not have witnessed such an outcry from the Right - especially from the Christian Right. Proper chastisement is for the enemy. In any case, Jones was not really chastised since most of the churches with a Fundamentalist bent merely whispered "he's not one of us!"

Media's "sissy boys" have also written/broadcast half-truths and misinformation with impunity: even though FOX News' credibility has slipped, it continues to advertise itself as "fair and balanced."** Watch the piece Think Progress put together about Bill O'Reilly and his demonization of immigrants. It's almost musical in its rhythm, picking its own "fair and balanced" way through O'Reilly's righteous indignation.

In politics, some of the biggest "sissy boys" are bullies:

Gov. Scott Walker abruptly reversed course today and demoted the son of a large campaign contributor [Jerry Deschane] to his former job with the state Department of Regulation and Licensing. The move comes one day after the Journal Sentinel reported that Brian Deschane, 27, had landed an $81,500-a-year job in Walker's administration overseeing environmental and regulatory matters and dozens of employees at the Department of Commerce. The promotion amounted to a raise of 26%. The younger Deschane has no college degree, little management experience and two drunken driving convictions.

Rev. Dan Vojir is has been writing/blogging on religion and politics for the better part of ten years. A former radio talk show host (Strictly Books " Talk America Radio Network) and book publisher, Dan has connected with some of the most (more...)
Related Topic(s): Bullying; Christian Crime Line; Christian Right; Cowardice And Impotence; Gay Bashing; Gay Rights; George Rekers; Psychology; Righteous Arrogance; Sissy Boy, Add Tags
Add to My Group(s)
Go To Commenting
The views expressed herein are the sole responsibility of the author and do not necessarily reflect those of this website or its editors.